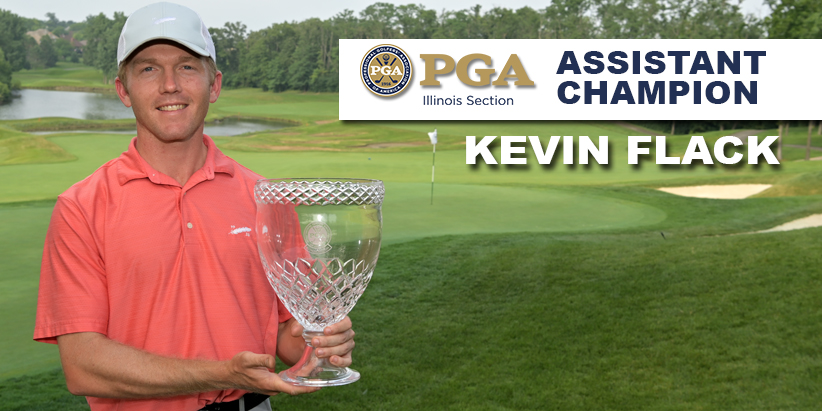 “I played solid today,” said Flack. “This year was a little different than 2019 because I was playing with the lead the entire time. There was a little more back-and-forth in 2019. Roy Biancalana gave me good advice last week. He said that in order to play well you need to swing freely. I was feeling a lot of pressure from the first shot of the second round through the last putt. I took his advice and just tried to keep playing free and it paid off.”

His strong play continued in the second round despite the field making pushes to take the lead. Flack carded a bogey-free second round with three birdies. He made the turn at 8-under-par for the tournament and led by one stroke. A birdie at the 11th hole put him in a tie for the lead with seven holes to play. A strong short game down the stretch helped Flack clinch the victory as he parred each of the last seven holes, getting up and down on 16 to remain in the lead.

“I made everything I looked at in the first round,” said Flack. “I didn’t quite make as many in the second round, but I left myself in good spots to get up and down and made the birdies putt when I had them. I had a big up and down on 16 to keep the lead and that sort of propelled me to the finish.”

Schlimm made a strong push for the lead in the second round. He finished the first round in a tie for third after a 2-under-par 70. He started the second round four strokes behind Flack, but would close that gap quickly in the second round. He birdied his first two holes in the second to cut into the lead before going on a tear on the back nine. Schlimm birdied 11, eagled the par-5 13th hole, and made back-to-back to birdies on 14 and 15 to tie Flack at 9-under-par for the tournament. A bogey on the par-4 17th and few missed opportunities down the stretch left Schlimm one stroke shy of Flack. He finished the tournament in solo second with an 8-under-par 136.

Schachner, who was the runner-up in 2020, also made a push for the lead in the second round. He finished round one in solo second place after a 4-under-par 68. He made six birdies in round one and trailed Flack by two strokes. He birdied holes two and five in the second round before eagling the par-5 seventh hole and making the turn at 7-under-par for the tournament. Birdies on 10 and 13 got Schachner to one off the lead, but a bogey on 16 dropped him back to 7-under-par where he remained for the next three holes.

If eligibility is met and maintained, the champion earns a berth in the 55th PGA Professional Championship.