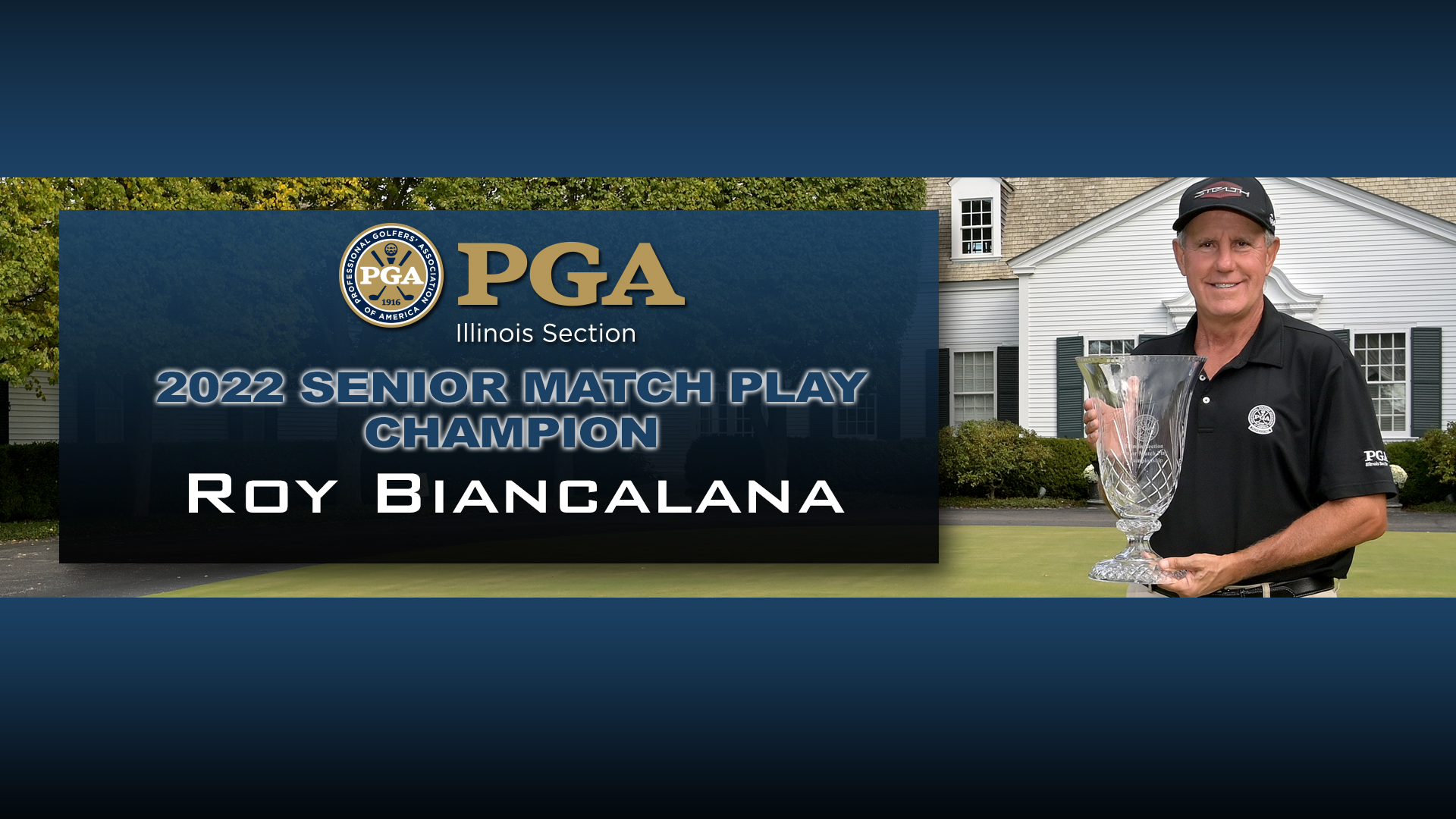 “I’m honored to have won 10 matches dating back to last year and becoming the back-to-back champion,” said Biancalana. “That feels great. This week, the course was immaculate and so difficult it was just a matter of trying to make pars and survive. This week was the most defensive I’ve ever played. I was just trying to make sure I didn’t give a hole away. It was mentally straining and very difficult this week, so it feels great to pull out the win.”

Biancalana’s week started on Monday afternoon. As the defending Champion, Biancalana claimed the one seed and earned a first-round bye. He began his tournament in the Round of 32 defeating 32nd seeded Patrick Lenski (Golf Underground) 4 and 3. He went on to win both of his matches on Tuesday, defeating 16th seeded Ryan O’Connor (Itasca Country Club) 6 and 4 in the Round of 16. Waiting for Biancalana in the Quarterfinal Matches was ninth seed Mike Haase (The Golf Academy at Terra Cotta). Biancalana won that match 1 up to earn in a spot in the Semifinals for the second straight year. Biancalana’s Quarterfinal Match would be the only match he played that went all 18 holes.

The Semifinal Matches took place Wednesday morning at Shorearces. Biancalana drew fourth seeded David Paeglow (Kishwaukee Country Club) in the Semifinals. Biancalana was in control for most of the match as he turned 4 up. He wavered a little on the back nine but was able to close the match on the 16th hole, winning 4 and 2 and moved on to the Championship Match where he faced Lunde.

The Championship Match started slow but was filled with action as the last two competitors plotted their ways around Shoreacres’ many challenges. Biancalana drew first blood on the par-4 third hole but made back-to-back bogeys on holes four and five and found himself 1 down.

There were two crucial moments in the Championship Match, both of which belonged to Biancalana. The first came at the par-3 6th hole, which played about 215 yards and features an 80-foot green. Biancalana, who was trailing the match by one, hit the center of the green and poured in a long putt for birdie to tie the match. His momentum carried over to the next hole as Biancalana took advantage of a Lunde miscue. He made par and won the hole to go 1 up. Biancalana took a 2 up lead on the par-4 fourth ninth hole after hitting his approach shot to eight feet. He cleaned up his second birdie of the round and held a 2 up lead with nine holes to play.

Similar to the Semifinal Match earlier in the day, Biancalana stumbled through the back nine. He made three straight bogeys on holes 10, 11, and 12. Lunde, who stuck around the entire match, took full advantage of these opportunities, making pars on two of the three holes to tie the match on the 12th hole.

The second crucial moment of the Championship Match came on the par-4 13th hole. Both players missed the green with their approach shots. Lunde carried his shot out of the right rough too far and his ball rolled off into the back bunker. Biancalana was playing to the middle of the green on his approach shot but pulled it just a hair and his ball found the left greenside bunker. Lunde was away and had the tougher of the two shots, he was unable to keep the ball on the green with his third shot. Meanwhile, Biancalana was able to splash his bunker shot out to about three feet. He saved par and took a 1 up lead with five holes to play.

That would not be the last time Biancalana leaned on his short game. After matching bogeys on the par-3 14th hole, Biancalana hit his second shot on the par-5 15th hole to the left of the green. He left himself a tough chip but had a ton of green to work with as the hole was cut in the front right corner of the green. Biancalana hit another great chip shot to about four feet and made birdie to go 2 up with three holes to play.

Biancalana had a look at birdie on the par-4 16th hole but was unable to slam the door shut. His par putt put the pressure on Lunde who failed to get up and down from the front of the green and Biancalana closed out the match 3 and 2 to win his second consecutive Illinois PGA Senior Match Play Championship.