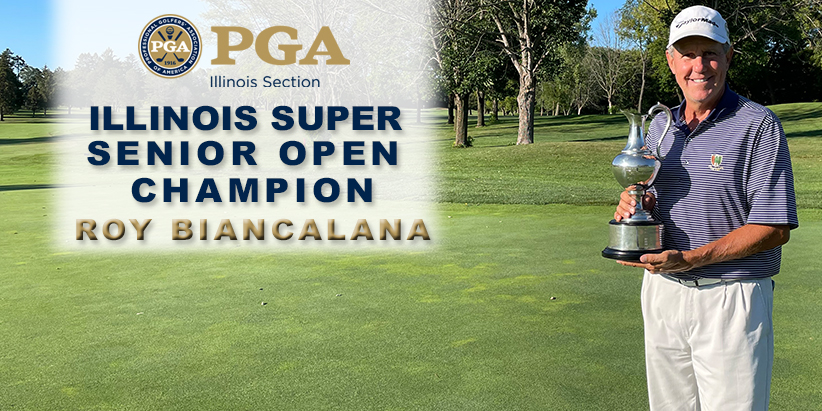 Biancalana entered the final round of the Illinois Super Senior Open in second place. In round one, he recorded a 3-under-par 69 and trailed Jim Sobb (Barrington, Ill.) by one stroke. He began his first round with a bogey on the second hole, but made a birdie on the par-4 fifth hole to get back to even par. He closed out his front nine with back-to-back birdies on the eighth and ninth holes. He made another pair of birdies on 11 and 12 to get to 4-under-par and added another birdie on the par-4 14, but two bogeys on the way in dropped him out of the lead and into second place.

Biancalana went bogey-free in the final round with five birdies. He birdied the par-5 second hole to get his round started and carried that momentum with him through the front nine. Two holes later he picked up another birdie on the fifth hole and closed his front nine out with a birdie on the par-4 ninth hole. Biancalana turned at 5-under-par and was tied for the lead with Vance Antoniou (North Barrington, Ill.) (a).

Antoniou started the final round in third place after a 2-under-par 70 in round one. He made a push for the lead on the front nine, carding birdies on holes two, four and five, before making his first bogey of the day on the sixth hole. He would birdie the eighth hole to get to 5-under-par for the tournament and turned in a tie for first place.

Biancalana stayed steady on the back nine, making par on four straight holes. He took the lead with a birdie on the 14th hole. After three straight pars, Biancalana stood on the last hole with a one-shot lead. Biancalana put an exclamation point on his week with a birdie on his 36th hole to shoot 8-under-par 136 and win his second straight Illinois Super Senior Open.

Antoniou finished in second after carding an even-par back nine. Antoniou was a little up-and-down in his final nine, logging three birdies and three bogeys. He ended the Championship at 5-under-par 139 and three back off Biancalana.

There was a three-way tie for fifth place between Ted Pecora (Glencoe, Ill.) (a), Mike Harrigan (Western Springs, Ill.) and Alan Schuermann Springfield, Ill.) (a) at 1-under-par 143. Pecora and Schuermann also tied for the Low Amateur Award.

The Illinois PGA would like to thank tournament founder and facility host, Dennis Johnsen, PGA, for once again hosting the Illinois Super Senior Open at Pine Meadows Golf Club.