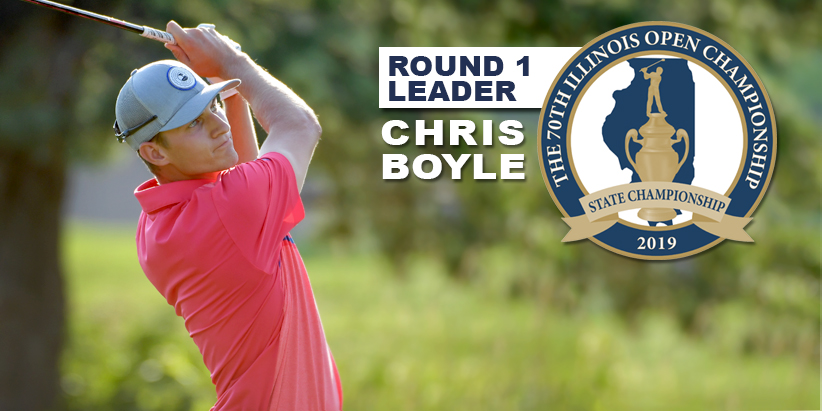 Glenview, Ill. – August 5, 2019 – Chris Boyle (Balmoral Woods GC) holds a two-stroke lead heading into the second round of the 70th Illinois Open. Boyle carded a seven-under-par 65 in round one at The Glen Club, to breakout out of a closely contested leaderboard.

“I’ve been mentally preparing myself on what I am going to do this week and how I’m going to do it,” said Boyle. “I got off to a solid start. I hit the fairways and I hit a lot of greens. I just got on a roll and it just kept on going.”

Boyle of Crete, Illinois started his Illinois Open with two-straight birdies on the first two holes. After a par on the par-4 third hole,
Boyle picked up two more birdies on Nos. 4-5. A bogey free front nine saw Boyle sitting in good position to make a push for the top spot of the leaderboard as he sat just one stroke off the lead.

The birdies continued to fall for Boyle on the back nine. He carded three birdies in-a-row on Nos. 13-15 before picking up his first bogey of the tournament on the par-4 16th hole. Boyle would go on to birdie the par-5 18th hole to secure the solo lead of the 70th Illinois Open.

“I beat my number today,” said Boyle. “Three birdies a side was my goal, I beat that with four on each side. I got everything accomplished today that I needed too. It was a good day, but there are still two rounds to go.”

David Cooke, who won the 2015 Illinois Open, is in second place after round one following a 5-under-par 67. Cooke got off to a quick start, birdieing five of his first six holes. Cooked poured in three birdies in-a-row to jumpstart his round, taking advantage of back-to-back pars on the opening holes of the back nine.

“I got off to a quick start,” said Cooke. “I took advantage of the par 5s on the back nine and made a few birdies. I gave a few back on my back nine, but overall it was a good day, I played pretty well.”

The Bolingbrook native went on to make six birdies on his front nine and made the turn at 5-under-par. Cooke’s strong start began to slow down on the front nine (Cooke’s back nine), as he bogeyed the par-4 first hole. After birdies on two and five, Cooke picked up his third bogey of the round before paring his final hole.

"Knowing that I’ve won it (The Illinois Open) once makes me feel like I can win it again, said Cooke. “I just need to stay patience and take advantage of my opportunities.”

Boyle and Cooke’s strong play have given them a slight advantage over the field. Boyle will turn his attention to Ridgemoor Country Club for round two, while Cooke will head to The Glen Club for the second round.

“It’s going to be great tomorrow. I’m going to go out and try and do the same thing,” said Boyle “I’m prepared mentally and really feel like I should be holding the trophy at the end of this.”

A group of nine players make up a large pack tied for sixth place, but still very much alive in the 70th Illinois Open. This nine-way tie comes from the likes of 2-under-par 70s on both courses. Among this group is Brandon Holtz, who has finished runner-up at this event the past two years.

The second round of the 70th Illinois Open will resume tomorrow at The Glen Club and Ridgemoor Country Club. The field will be cut to the low 50 and ties, as well as anyone within 10 shots of the lead.