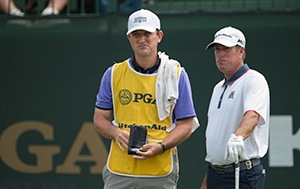 Hundreds of thousands of racing fans flocked to Speedway, Indiana last weekend for the 100th running of the Indy 500. Yet John Dal Corobbo, lead golf instructor and PGA Assistant Professional at Speedway’s own Brickyard Crossing Golf Course, was seeking a different type of Memorial weekend madness when he took off from the national racing capital on route to Benton Harbor, Mich. The 77th PGA Senior Championship was held there last weekend at the Harbor Shores Golf Club.

Ending the final day with an eleven-under-par 273, Dal Corobbo’s long week left him with a magical T7 finish. Thrilled with his purse-winning performance, Dal Corobbo had no hesitation in attributing a significant portion of his success to his caddie, longtime friend and the Illinois PGA’s 2015 Player of the Year, Brian Brodell.

The two met as Brodell began as the Assistant Coach for the Purdue Men’s/Women’s Golf teams when they were paired as a twosome for a single day Section event.

“I really liked how he swung the golf club, how he went about his business; how he putts and how he rolls the ball about the green. So, I got a putting lesson from him and we became friends,” Brodell said about Dal Corobbo.

Though they have competed alongside one another a variety of times, Brodell says he had never thought about caddying for Dal Corobbo until last October.

“After he won the Senior National Club Pro out in California I shot him a text and we were texting throughout the week. I said, ‘you know, I don’t know who caddied for you last year but I’ve played Harbor Shores before and I’d love to caddy for you.’ He responded, ‘I’d love to have you.’”

After going up to the course in April for a test round 36-holes, they knew that the pairing was solid.

Hopeful, but not overconfident, Brodell said he never could have expected such a positive outcome from Dal Corobbo’s play in the tournament. Neither could the golfer, himself.

“He got there Sunday night, we got to our place late and he said, ‘You’ve got your work cut out for you this week. I’m not chipping the ball great.’ And I just looked him in the eye and said ‘I don’t care. Stop talking negatively. We’ve got three days to prepare, we’re gonna have a game plan, were gonna stick to it, were gonna be committed and were gonna have a shot.’”

Asked by his competitors how he thought Dal Corobbo would do, Brodell simply insisted, “I think you’ll see us on Sunday celebrating.” And celebrate they did. But not before a long, four-day uphill battle.

“I just kept trying to pump it into him like, ‘Hey, you belong out here, you’re good enough. It doesn’t have to be perfect to be successful but we just have to manage what you do well,”’ says Brodell.

The pair focused on his strengths, like playing the short game. “He was probably last in the field in driving distance, but we didn’t hit drivers. We were hitting three woods off the par fives and then a seven iron lay-up.”

Brodell notes that their mutual trust and respect was an integral factor in their success as a team.

“We play a similar game in our distances so I see shots that he sees. Towards the end there he was like, ‘I’m on autopilot Brian,’ so I was just handing him clubs. I mean he had that much trust that I could be like, ‘Hey you’re carrying this 190, hit it at that guy in the green shirt and the wind will take it, all the way until the end.’”

It was advice like this that gave Dal Corobbo the confidence to finish strong.

“I can't say enough for what Brian Brodell has done the last couple days. It's been really fun. He's been a good friend for a while,” Dal Corobbo pointed out in an interview with the PGA of America.  “He probably knows me better than I know myself. But he really did a nice job. A lot of it was his help, for sure.”

When all the stress of play had settled, the pair could relax and enjoy their achievement.

“We go into the champions toast and Rocco’s on the cart in front of us, we’re behind him and police are escorting you in there. You’re having drinks with the president of the PGA and all the board members and Rocco is there and then you go in the locker room,” said Brodell of the award ceremony.

Afterwards, he identifies the most surreal moment of the week as a simple one: “I was having a conversation with Rocco and I’ve got a beer, he’s drinking vodka, and we’re just standing there, talking to each other.”

Including the prize purse, TaylorMade gear and KitchenAid appliances awarded from tournament sponsors, Dal Corobbo’s winnings total almost $100,000. Now the Director of Junior Development at Mistwood Golf Course in Romeoville, Ill., says that taking the time off last weekend to help out his good friend was an unforgettable experience.

“It was just something I’ll never take back, just the emotion. I mean they don’t show on camera, but to help a friend and watch him financially just take a lot of stress off of himself, I mean it just choked me up to see his smile. He was just so happy, I mean, you can’t put a price tag on that.” (Photo courtesy Montana Pritchard/The PGA of America)