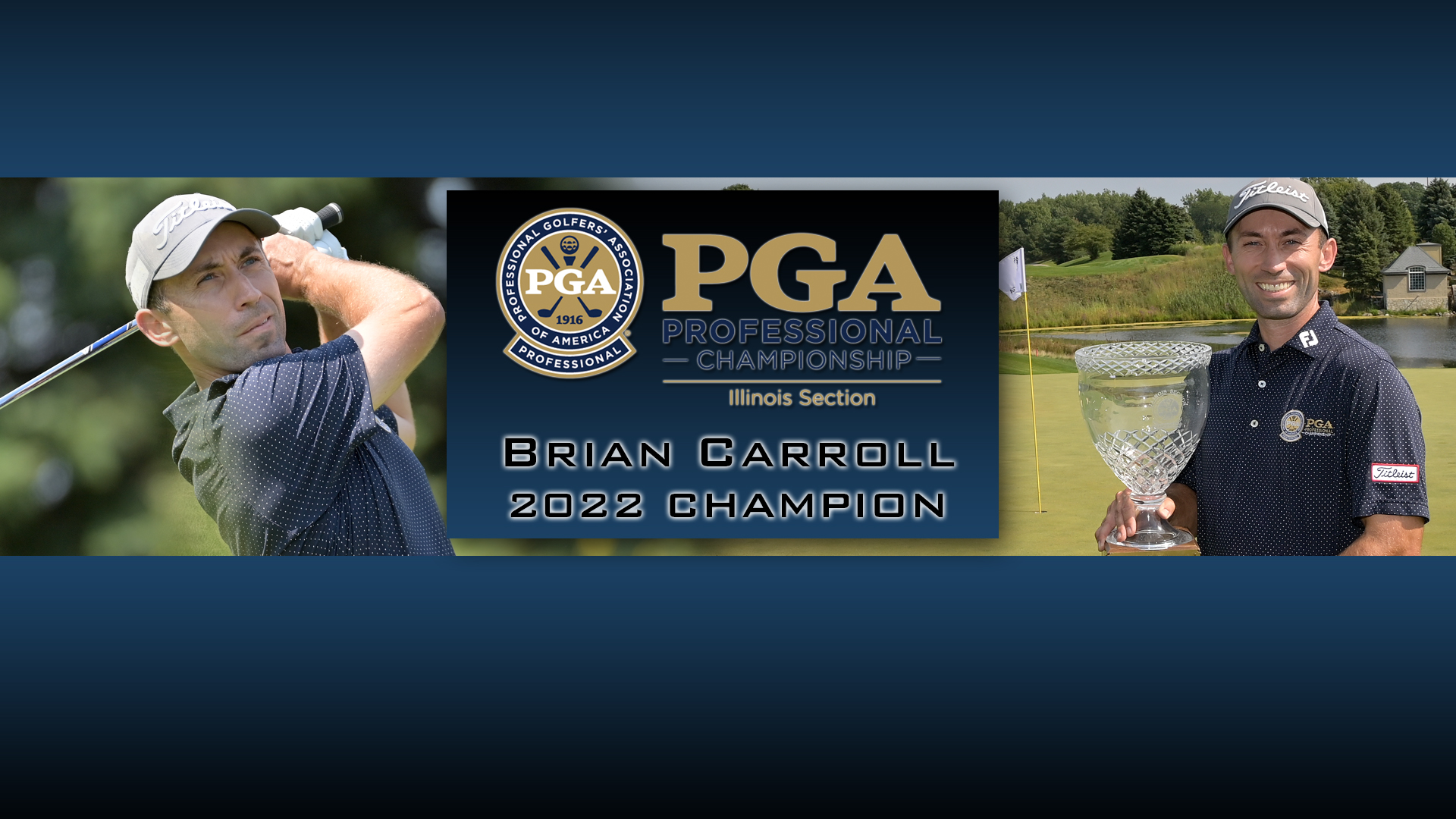 “This is certainly a tough tournament to win,” said Carroll. “We have so many good players in our Section. I thought this was the deepest field we have ever had. We had a couple of guys that got their Class A membership recently and they both qualified for the National Professional Championship in their first time playing in this event. Having those guys come into this event, I knew I had to play great golf to qualify again.”

The playoff was contested on the par-4 16th hole, the par-3 17th hole, and the par-5 18th hole. Carroll had the honors on the first playoff hole and hit his approach shot to six feet to make birdie. Small left his second shot just short of the green and chipped up to about three feet to make par. Carroll moved to the second playoff hole with a one-stroke lead.

Both Carroll and Small made par on the 17th hole and moved to the par-5 18th hole. Small hit his drive into the right rough. He pulled out his hybrid and left his second shot in the greenside bunker. Carroll was a few yards ahead of Small in the fairway and had 239 yards into the green. He also hit hybrid into the greenside bunker. Both players splashed their bunker shots to about 10 feet. Small failed to convert his birdie putt and Carroll was able to cash in for birdie to secure his first Illinois PGA Professional Championship victory.

Carroll made his move on the back nine. He made back-to-back to birdies on holes 10 and 11 to get to 3-under-par. The group behind him had made some bogeys on their front nine, leaving Carroll one shot off the lead. Carroll used the slopes around the green to his advantage on both the 10th and 11th holes. On 10, Carroll hit a low cut onto the green, it rolled up the back of the green and stopped prior to running off the back and rolled back down towards the hole to about eight feet. On 11, Carroll hit his second shot towards the left side of the green, it caught the slope and ran up to the hole inside 10 feet.

The birdie stretch continued for Carroll on the 14th hole. At the time, Carroll got to 4-under-par and took sole possession of the lead. He then stepped to the tee of the par-5 15th hole. He hit his second shot to the center of the green and had about 12 feet for eagle. He was unable to make eagle, but his birdie helped extend his lead to two strokes.

With the players behind him making moves up the leaderboard, Carroll found himself with a one-stroke lead on the par-3 17th hole. He hit his drive to the front of the green and poured in a 70-foot putt for birdie to regain sole possession of the lead. Carroll made par on his 54th hole to finish the day at 4-under-par 67 for a tournament total of 6-under-par 207.

“To win something like this, a lot of times you have to get good breaks,” said Carroll. “On 17 I rolled in close to a 70-footer for birdie. I was just trying to make a par and move on to 18. Rolling in a putt like that, you kind of start thinking that things are going to go your way.”

Small’s road to the playoff was just as eventful as Carroll’s. Small played in the final pairing on Wednesday and started the day two strokes off the lead. Chasing down one of his playing partners, Kyle Donovan, Small made his first birdie of the day on the par-3 fourth hole after almost making a hole-in-one. The birdie moved Small to 4-under-par, and he was just one off the lead at that time. A bogey on the fifth hole dropped Small back to 3-under-par. He took advantage of the par-5 sixth hole. He hit a nice shot from the front of the green on six and left himself a short birdie putt. He moved to 4-under-par and was two off the lead at the time. Small made pars on his remaining three holes and actually moved into a share for the lead as his playing partners made bogeys on their final holes on the front nine.

Small moved into sole possession of the lead on the 12th hole. The short par-4 was playing 295 yards in the final round. Small drove his tee shot into the greenside bunker and hit a fantastic bunker shot to about eight feet. Again, taking advantage of his playing partner’s miscues, Small made birdie to get to 5-under-par and move to the top of the leaderboard for the Championship.

Things got shaky for Small on the par-3 13th green as he struggled to get up and down from the greenside bunker and made double bogey to drop to 3-under-par. At the time, Carroll moved into sole possession of the lead. Small bounced back making back-to-back birdies on 14 and 15 to get to 5-under-par for the Championship. Needing a birdie on the 18th hole to force a playoff, Small reached the par-5 in two and had an eagle putt to win the Championship. He lagged the putt up close but wasn’t able to cash in the eagle. He tapped in the birdie to force the playoff between himself and Carroll.

“I have three goals every year and I’ve been pretty close to achieving them all but have never actually gotten any of them done,” said Carroll. “Today is one check mark off that list. I haven’t won an Illinois PGA Major as a Class-A member. I’ve been runner-up at every major so getting this done is great.”

Kellen, Donovan, and Flack will all be making their first career PGA Professional Championship appearances next April.