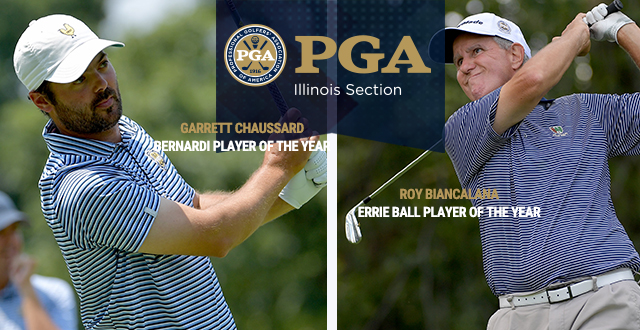 “We have some very elite players in the Illinois Section,” said Carrie Williams, Executive Director of the Illinois PGA Section. “The Player of the Year races are always fun to watch as they unfold throughout the course of the season. Garrett and Roy both showcased some great golf this season and performed well at major events. We congratulate both of them on this outstanding achievement.”

Chaussard’s season also featured career best finishes at both the 70th Illinois Open and the Illinois PGA Professional Championship. He finished T9 at the Illinois Open and second at the Section Championship, falling just one stroke shy of winner, Travis Johns (Medinah Country Club). Chaussard’s second place finish qualified him for the 53rd PGA Professional Championship set to take place on April 26-29, 2020 at the Omni Barton Creek Resort and Spa in Austin, Texas.

In total, Biancalana appeared in 18 Illinois PGA events (10 Senior events and eight Section events) in 2019. His low round came at his victory at the Senior Stroke Play # 4 at Kishwaukee Country Club, where he carded a 64.

These two awards are named after Sam Bernardi and Errie Ball, both of which were tremendous players on the Illinois PGA circuit and the PGA TOUR. Bernardi was a member of the Illinois PGA from 1926-1972, holding positions at Briegrate Country Club, Old Elm Club and Indian Hill Club. Ball served and contributed to the game of golf for over forty-four years as the head PGA Professional at Oak Park Country Club. He was also the first Director of Golf at Butler National Golf Club in 1972.