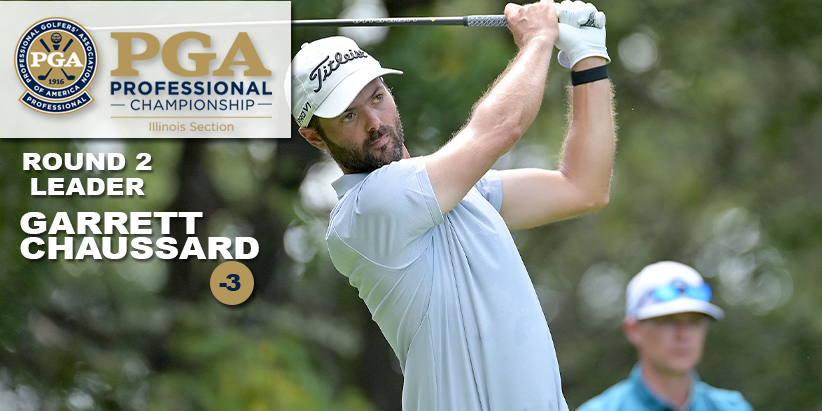 MUNDELEIN, Ill. – August 25, 2021 – Garrett Chaussard (Skokie Country Club) leads the Illinois PGA Professional Championship after 36-holes. He will begin round three at 3-under-par for the tournament and is leading the field by one stroke.

The second round of the Illinois PGA Professional Championship was suspended due to darkness following a two-hour rain delay earlier in the day.

Chaussard entered the second round tied for third place. He started his round with a bogey on the first hole to drop back to even par for the tournament. He got that stroke back two holes later with a birdie on the third hole. Chaussard made another bogey on the eighth hole but responded with a birdie on the very next hole. After turning at even par for the day, Chaussard made five straight pars to start his back nine. A birdie on the par-5 15th hole pulled Chaussard within one stroke of the lead. Chaussard’s second round was delayed due to weather, but the two-hour delay did not slow him down as he came out and birdied the 16th hole, which put him in a tie for the lead at the time. He finished the round with back-to-back pars to card a 2-under-par 70 in round two for a tournament total of 3-under-par 141.

“It was very tough out there today,” said Chaussard. “It was a long day. I think the break was good for me. We were moving along pretty well, and I think it slowed me down a little and it was nice to have a little break. I was fortunate to make birdie on 16 coming in and I scraped together a couple of pars on the last two.”

Andy Mickelson (Mistwood Golf Club) entered the second round in a tie for third place following a 1-under-par 71 in round one. Mickelson strung together a solid second round with a bogey-free front nine. He made birdie on the second hole, which gave him a share of the lead after Frank Hohenadel (Mistwood Golf Club) bogeyed the first hole. Mickelson took sole possession of the lead momentarily with a birdie on the 13th hole. His second round was also delayed due to weather. At the time of the delay, he had a share of the lead, however, he would bogey the 18th hole Tuesday night to finish the day T2 at 1-under-par 71 for a tournament total of 2-under-par 142.

“It was nice to be able to finish the round. I thought it was the right call getting us back onto the course,” said Mickelson. “I had a lot of momentum going before the delay, but once we got back out there, I wasn’t making good swings. I played so well in the middle of the round but couldn’t make anything. I had looks on 9-12 for birdie and I finally got one to go on 13. I played well, though. I think I played better than I did in the first round. I just need to stay focused on my game and hopefully, I’ll be right there at the end.”

Frank Hohenadel (Mistwood Golf Club), who started the second round in first place, finished the second round in fourth place. Hohenadel finished his second round on Wednesday morning after the round was suspended. He got off to a shaky start on Tuesday afternoon, making bogey on the first hole and a double bogey on the fourth hole. Hohenadel got back on track with a birdie on the fifth hole and the eighth hole but still made the turn at 2-over-par for the day dropping back to third place. Coming out of the weather delay on Tuesday, Hohenadel made bogey on the 13th hole, but finished with a birdie on the 14th hole before the round was suspended. On Wednesday morning, Hohenadel finished his second round with three pars on holes 16-18 for a two-over-par 74 and a tournament total 1-under-par 143.

Matt Slowinski (Hinsdale Country Club) carded the low round of the morning wave in round two with a 2-under-par 70. He climbed eight spots and finished the day in fifth place.

Kurt Rogers (Champaign Country Club) carded a 1-over-par 73 in round two and moved up three spots on the leaderboard. He is currently in sixth place with a tournament total of 2-over-par 146.

Chris French (Aldeen Country Club) recorded a 2-over-par 74 in the second round to move up two spots on the leaderboard. He is in solo seventh place at 3-over-par 147 for the tournament.

Jonathan Duppler (Elgin Country Club) and Chris Green (Glen View Club) round out the top ten after 36-holes. Both players are at 5-over-par 149 for the tournament.

The final round of the 99th Illinois PGA Professional Championship will be played Wednesday afternoon starting at 11:30 a.m.