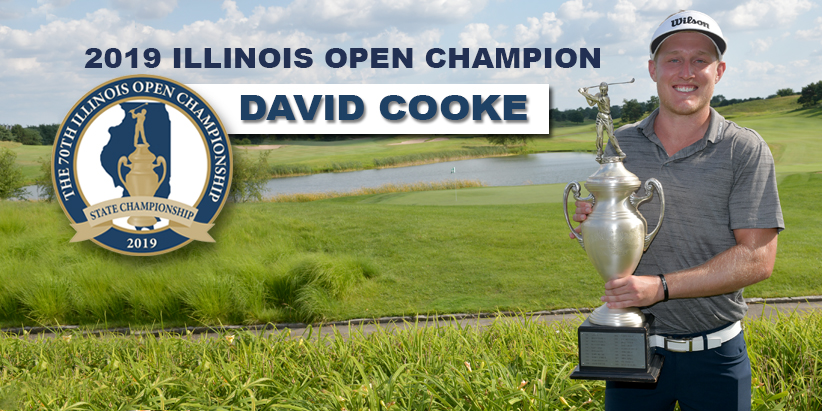 Glenview, Ill. – August 7, 2019 – David Cooke of Bolingbrook, Ill won the 70th Illinois Open Wednesday at the Glen Club. This marks Cooke’s second Illinois Open victory in four years and his first as a pro. With the win, Cooke becomes just the eighth person to win two Illinois Opens and the 12th multi-winner in the tournament’s 70-year history.

“It feels good to win as a pro,” said Cooke. “It’s a little bit of a different feeling, but both wins are pretty special.”
Cooke started the final round with a three-stroke lead on the field and was determined to make the rest of the field catch him, rather than him dropping to them.

“I tried to make the best decision I could on every shot and make smart choices,” said Cooke. “I wanted to make the field catch me and not let myself fall back. I played pretty conservatively, while trying to make birdies where I could.”

That is exactly what he did. A bogey-free round with five birdies secured the 70th Illinois Open Championship for Cooke. He carded a birdie on the front nine and slammed the door shut with birdies on holes 10, 12, 14 and 16 on the back nine. Cooke carded a 5-under-par 67 for a 13-under-par 203, tying for the fourth best 54-hole score to par in an Illinois Open. A perfect to start to an exciting week for Cooke, who is getting married on Saturday.

“This has been quite a week for me,” said Cooke with a smile. “The wedding didn’t add too much additional pressure, but I knew that whatever happened I was still going to get married this weekend. My fiancé is very excited. We had just started dating back in 2015 when I first won, so both victories have been special for us.”

Nick Hardy of Northbrook, Ill finished in second place with a 9-under-par 207, four shots behind Cooke. Hardy’s Illinois Open started slow, following an even-par 72 in round one at Ridgemoor Country Club, but he fought back the next two rounds to get back into contention.

“David (Cooke) played great this week,” said Hardy. “I played well today and got off to another good start. I kind of stubbed my toe in the first round a little, but there are a lot of positives to take from this week.”

Hardy started the final round T5 and birdied four of his first six holes. He gave one shot back on the par-4 seventh hole and made the turn at 3-under-par.

The Northbrook native made the turn in second place and just three strokes off the lead. He continued his strong round with birdies on 11, 14 and 15 before recording his second bogey of the round on the par-4 16th hole. A birdie on 18 resulted in a 6-under-par 66 and the low round of the day.

“I felt really good about my game coming into the tournament, said Hardy. “I grew up five minutes down the road from here and went to high school three minutes from here. It’s always fun to play a home game.”

Hardy has now finished inside the top five in his last three Illinois Open appearances. He finished T4 in 2016 and T2 in 2017. With this year’s second place finish, Hardy becomes the 11th player to finish runner-up twice at the Illinois Open.

Bryan Baumgarten and Jordan Less finished T4 and shared the Low-Amateur title. Baumgarten made his Illinois Open debut this week, while Less made his third appearance.

Baumgarten’s final round of 5-under-par 67 sent him flying up the leaderboard following his first two rounds that saw his tournament total sit at 1-under-par 143. His final round was highlighted by a bogey-free front nine with three birdies and an eagle on the par-5 18th hole.

Less entered the final round at 3-under-par 141. He carded five total birdies during the last round. After a bogey on the par-4
16th hole, Less needed a birdie on one of the last two holes to tie Baumgarten for the Low Amateur title. He would go onto to birdie the par-3 17th hole and par the final hole of the tournament.

Illinois PGA Members, Frank Hohenadel and Garrett Chaussard both finished inside the top 10 at the 70th Illinois Open. After a final round of 3-under-par 69, Hohenadel finished in solo third place with a 7-under-par 209 tournament total.

Chaussard finished his tournament with a 4-under-par 68, which put him in a tie for ninth place. He carded a tournament total 3-under-par 213 for his best finish at the Illinois Open.

“I think the course setup was awesome. Ridgemoor (Country Club) was an awesome venue and the golf course was set up great”, said Cooke. “They did a fantastic job with course conditions and the two different course styles made it fun.”

The Illinois PGA would like to thank The Glen Club, Ridgemoor Country Club and their staffs for hosting at their facilities, as well as all the volunteers and participants. And, thank you to Tito’s Vodka, presenting sponsor, of the 70th Illinois Open.