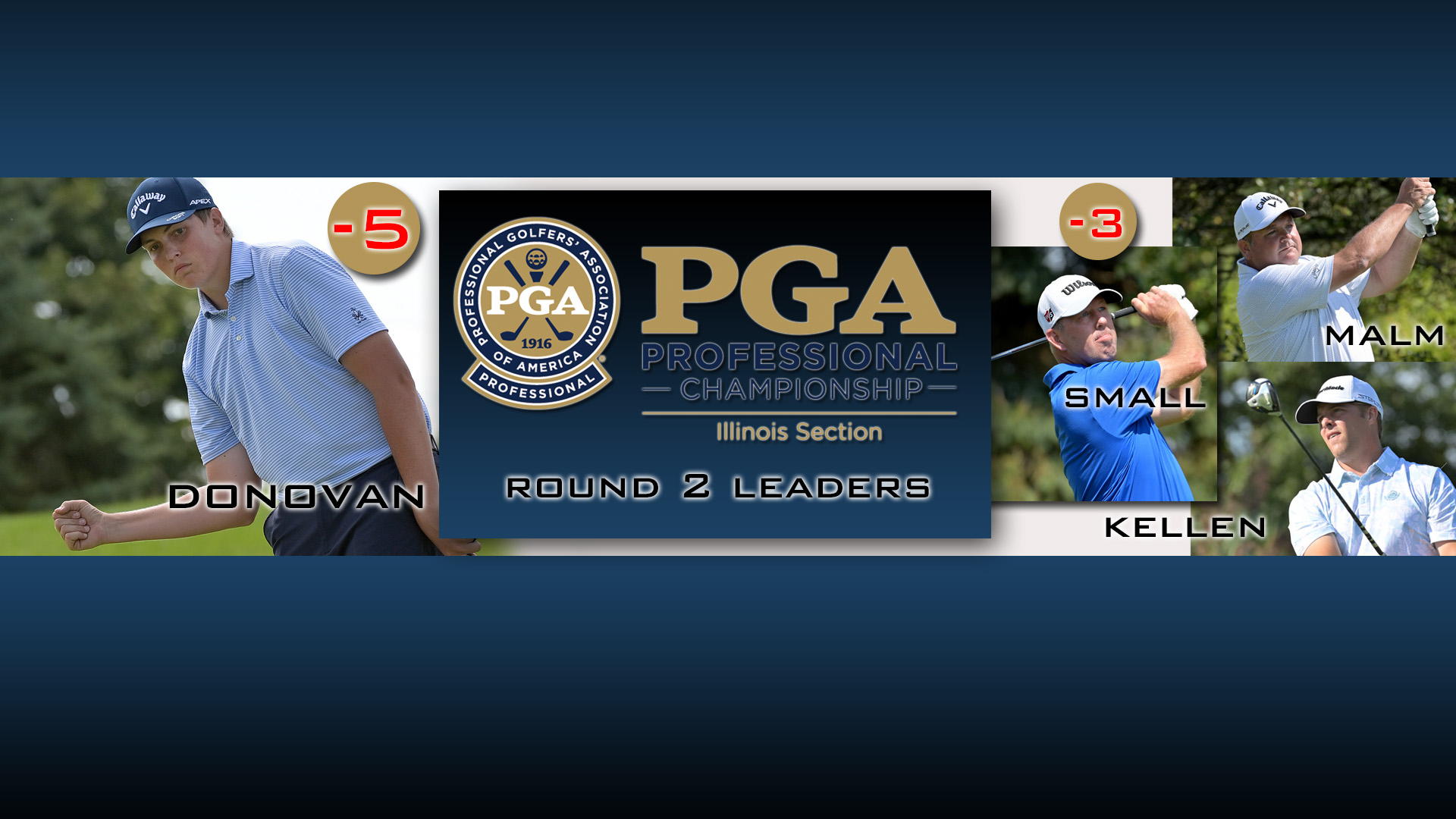 BARRINGTON, Ill. – August 23, 2022 – Kyle Donovan (Oak Park Country Club) holds a two-stroke lead after 36 holes at the Nadler Golf Cars Illinois PGA Professional Championship. He carded a 2-under-par 69 in round two and is 5-under-par (137) for the tournament. Donovan is seeking his first career Illinois PGA Professional Championship victory in just his first eligible career appearance at this event. The final round will be played on Wednesday morning at Makray Memorial Golf Club.

“I’m definitely happy with where I stand,” said Donovan. “I played great yesterday. Today was the opposite of that. I hit it all over the place. I made a bunch of putts today that kept me in it. I was just trying to take it shot by shot. It’s tough out there.”

Donovan started the day in a tie for first place at 3-under-par. He came out of the gates hot birdieing the first hole to take sole possession of the lead and built on that lead with a birdie on par-4 third hole. Holding a two-stroke lead, Donovan recorded two bogeys to finish his front nine with bogeys on the seventh hole and the ninth hole to turn in a four-way tie for the lead.

The 10th appeared to be troublesome for Donovan, who hit his tee shot left into the fairway of the first hole. He hit a miraculous second shot into the green leaving him about 10 feet for birdie. Donovan was able to capitalize on the great approach shot as he made birdie and moved back into sole possession of the lead at 4-under-par.

A bogey on the par-3 13th hole dropped Donovan back to 3-under-par but he was able to take advantage of both the par 5s on the back nine. He was in the right-hand rough short of the green on 15 after his second shot. He hit his chip shot past the hole and left himself about 15 feet for birdie. Donovan poured in the putt for birdie to move to 4-under-par and regain sole possession of the lead. On 18, Donovan hit his second shot into the left rough. A tough hole location called for his third shot to be below the hole, but Donovan carried his chip a little too far and it ran out past the hole to about three feet. Trying to take the break out of the putt, Donovan put some speed on his putt and drilled the birdie to move to 5-under-par for the tournament.

“On 18, I committed to a shot off the tee and hit a nice five iron with my second shot. I knew that the pin was tucked in the front and that I needed to be below the hole. I had a testy three-footer there for birdie. I gave it some speed because I didn’t know if it was possible to make it without it. I was really happy with birdie on the last.”

As one of the younger players in the Championship, Donovan will look to use past Championship experience at Makray Memorial Golf Club in the final round.

“I have some course history here,” said Donovan. “I played the Illinois State Junior Am a bunch here. Probably the highlight of my junior career was getting the 18th flag here for finishing 18th. I feel pretty comfortable out here on the golf course.”

A win for Donovan tomorrow would mark the first time an Illinois PGA Professional won the Section Championship in his first appearance since Mike Small did it in 2001.

Kellen started the day tied for the lead at 3-under-par. He attacked the front nine of Makray Golf Club again this morning birdieing two of the first three holes. As he did in round one, Kellen pulled driver on the par-4 third hole and knocked it on the green leaving himself 15 feet for eagle. He was unable to cash in the eagle bid but would move to 5-under-par and take sole possession of the lead.

Kellen finished off his front nine with six straight pars for a bogey-free 33. The back nine was not as eventful for Kellen who bogeyed the 13th hole and the 17th hole to finish the day at even-par 71. Kellen will be in the final pairing tomorrow morning and is searching for his best finish at this event since his T11 finish at the 2020 Illinois PGA Professional Championship at Medinah Country Club.

“I hit it much better today,” said Kellen. “I just didn’t hole as many putts and I hit a few loose ones coming in that kept me out of the red numbers. Overall, it was a good day.”

Small kept himself in the mix on Monday, carding a 1-under-par 70. Trying to play his way into the lead on Tuesday, Small made three birdies on the front nine to go along with a bogey on the par-3 fourth hole. Small, who is working through a swing change, struggled on the back nine make bogeying the 10th hole and the 14th. However, he drove the green on the par-4 12th hole and made birdie and also closed his round out with a nice up and down on the par-5 18th hole for birdie to shoot a 2-under-par 69. Small will look to close out his 14th Illinois PGA Professional Championship on Wednesday.

“I hit it better today, but today’s round was similar to yesterday,” said Small. “I hit it pretty good, but I didn’t make a lot of putts. I took advantage of some of the shorter par 4s and the par 5s today. I made some unforced bogeys as well.”

Malm got himself into the tie for third with a strong back nine. After a first-round 71 (even par), he made two bogeys on the front nine with a birdie on the par-5 sixth hole to turn at 1-over-par for the tournament. He then carded a bogey-free back nine with two birdies and an eagle to finish his day. Malm birdied the 11th and 14th holes to back into red figures. He then closed the day out with an eagle on the par-5 18th hole, hitting the green in two, and burying the putt from about 30 feet. He was the only player to birdie the 18th hole in round two.

“It was a good round today,” said Malm. “I missed one green by about a foot. I had a couple of three putts, and I finished it off with an eagle on 18. The greens are very tough. You have to know exactly where you want to be. If you get on the wrong side of these greens, you have no chance. I found myself on the wrong side a couple of times early on today but was able to get it around.”

Malm is looking to complete the Illinois PGA career grand slam with a victory at the 2022 Nadler Golf Cars Illinois PGA Professional Championship.

“I absolutely want to win this,” said Malm. “This is the only thing in Illinois I haven’t won going back all the way to junior golf. This would be a big one.”

Brian Carroll (The Hawk Country Club) is in fifth place after 36 holes. He carded a round of 1-under-par 71 in round two for a tournament total of 2-under-par 140. He is currently three strokes off the lead.

Roy Biancalana (Blackberry Oaks Golf Club) and Andy Mickelson (Mistwood Golf Club) are T6 at even par 142. Both players will begin the final round trailing by five strokes.