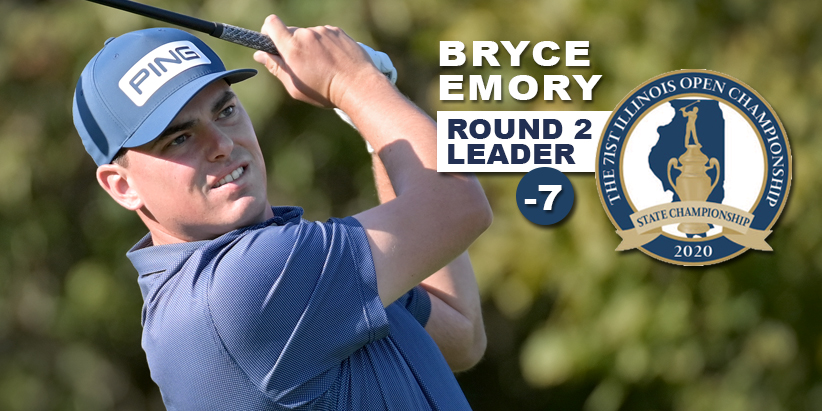 Email this to a Friend
Bryce Emory Will Look to Win His First Illinois Open After Tying the Modern-Day Course Record in Round Two
NAPERVILLE, Ill. – August 4, 2020 –Bryce Emory of Aurora, Ill. tied the modern-day course record just one day after the record was set by Brandon Holtz in round two of the 71st Illinois Open. Emory’s second round 6-under-par 66 gives him a four-stroke lead heading into the final round as he looks to capture his first Illinois Open title.

“This course hasn’t yielded many good opportunities this week,” said Emory. “I was lucky enough to capitalize when I got them today. I was amazed when I saw him (Holtz) set the record yesterday and saw all the birdies he made. I wasn’t even thinking about the record and then I made a birdie on the 12th hole and then an eagle and then all of sudden it kind of creeps into the back of your mind. It’s definitely an honor anytime you can put your name next to Tiger’s. I’ll hold that one pretty close.”

Emory started the day tied for seventh place and five strokes off the lead. In round one, he carded just one bogey and two birdies to shoot 1-under-par 71. Emory’s second round got off to a slow start with a bogey on the first hole. He got back to even par with a birdie on two, and made back-to-back birdies on four and five. He dropped back to even par with back-to-back bogeys on holes seven and eight, but birdied the par-4 ninth hole to make the turn at 1-under-par 35.

For the second straight day, Emory went bogey-free on the back nine. He birded the par-3 12th hole and eagled the par-5 14th hole. He closed his round out with birdies on the 15th hole and the 17th hole to tie the modern-day course record at 6-under-par 66 and post a tournament total 7-under-par 137.

“I was definitely able to put it in the right spots today and the times I didn’t, I was able to scramble,” said Emory. “I’ve always been pretty good in the wind. I hit it lower than most guys so when it gets windy it kind of helps me.”
Charlie Netzel (Western Springs, Ill.), Tee-K Kelly (Wheaton, Ill.) and Ethan Brue (Ashland, Ill.) are tied for second place at 3-under-par 141 heading into the final round. All three of these players entered round two tied for seventh place after carding 1-under-par 71s in round one.

Netzel had one bogey and a birdie on the front nine to make the turn at even-par 36. Following a bogey on the par-3 12th, Netzel made back-to-back birdies on 13 and 14. He made another bogey on the par-3 16th hole, but finished strong with back-to-back birdies on 17 and 18 to shoot 2-under-par 70 in round two.
“It’s hard out there. It’s windy and the greens are fast,” said Netzel. “You need to be disciplined and hit the greens and try give yourself as many birdie putts as you can. I’m sure it will be windy again tomorrow, so we’ll see. It’s a fun course.”

Kelly started round two with five straight pars, before recording his first birdie on the par-5 sixth hole. He would drop back to even-par for the day with a bogey on the eighth hole and made the turn at even-par 36. Kelly continued his consistent play on the back nine, making pars on holes 10-13. He birdied the par-5 14th hole, but gave the stroke right back with a bogey on 15. Kelly took advantage of the wind on the final two holes and closed his round out with back-to-back birdies on 17 and 18 to shoot 2-under-par 70.

“I finally had two good looks coming in and was able to two putt the one on 17 for birdie and make another one on 18,” said Kelly. “Those were the only two putts I had inside 20 feet all day. I was scrambling out there. I was two putting from 60 feet, 70 feet. I was joking around with my caddie that it felt like the lag putting Olympics for us out here today. It’s a championship right now. It’s been tough and it’s been fun.”
Brue started the second round on the back nine with three pars. He bogeyed the par-4 13th hole before making back-to-back birdies on holes 14 and 15. Brue offset his bogey on the 16th hole with a birdie on 17 and made the turn at 1-under-par 35. He picked up two more strokes on the front nine with birdies on three and six, but bogeyed the par-4 seventh hole for a 2-under-par 70.

After setting the modern-day course record in round one and leading the field by three strokes, Brandon Holtz battled the conditions and turned in a 4-over-par 76 in the second round. He is currently tied for fifth at 2-under-par 142.

“It was rough today,” said Holtz. “I had a lot of control of the golf ball yesterday putting it where I wanted to. That was not the case today. I battled today and it looks like I’m still in the mix, so we’ll see what happens tomorrow. This course is great and the greens are good. They’re firm, they’re tough. They should be tough. Championship tournaments should be tough.”

Patrick Flavin is also tied for fifth following a 1-over-par 73 in round two. The 2017 Champion entered the second round just three-strokes back of Holtz. The two will be paired together as Flavin tries to win his second Illinois Open in four years.
Jordan Less (Elmhurst, Ill.) is currently T7 at 1-under-par 143. He carded a 3-under-par 69 in round two and is currently leading all amateurs in the field. Less tied for the Low Amateur Award at the 70th Illinois Open.

Garrett Chaussard (Park Ridge, Ill.) is also T7 at 1-under-par 143. He leads all Illinois PGA Professionals in the field after carding an even-par 72 in round two. He is looking to top his T9 finish at the 70th Illinois Open for his best finish at this event.
Final round tee times will begin at 9:00 a.m. tomorrow. All groups will tee off the first hole with the leaders starting at 11:56 a.m.