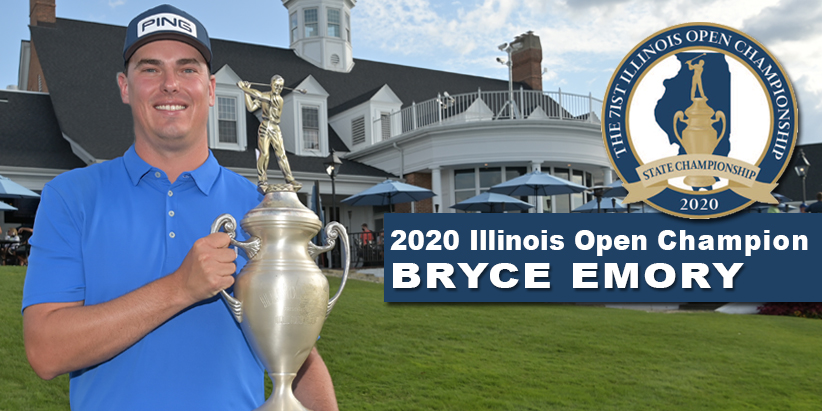 “I started off the day believing if I could keep the ball in the center of the fairways and center of the green and try to limit bogeys and mistakes, I could force the field to come back and get me,” said Emory. “I figured that was going to be the best play.”

“This is definitely the biggest win of my career so far,” said Emory. “This is always a great event and one I have been playing since I was a freshman in college. I’ve always wanted to win this event. You always want to win your home state tournament, and to finally get it feels great. The Illinois Open is always a great event and I’m just happy to get my name on that trophy. And, I get a parking spot for next year too.”

Emory struggled to get things going early on in the final round. Following a record setting round two, Emory bogeyed both the par 5s on the front side and saw his four-stroke lead disappear. Up ahead of him, Ethan Brue birded two of his first five holes and was tied with Emory at 5-under-par.

Brue made a quadruple bogey on the par-4 seventh hole and bogeyed the par-3 eighth hole, falling out of the lead and leaving Emory alone at the top of the leaderboard.

After the slow start, Emory got back on track with a birdie on the par-4 ninth hole. He made the turn at 1-over-par 37 for the day and 6-under-par for the tournament, clinging to a three-stroke lead.

The back nine saw Emory return to form as he carded a bogey-free back nine with birdies on holes 10 and 14. Emory cruised through the 18th hole with four straight pars to secure his first Illinois Open Championship.

“I made a couple of bad bogeys on the front nine, but the birdie at 9 turned it around and then I stole one at 10 with that tough pin,” said Emory. “From there I knew if I kept hitting fairway, green, fairway, green eventually we’d run out of holes. I loved it out here this week. The course was in great shape and White Eagle really took care of us. It was a first-class facility for sure.”

Jack Korzon (Downers Grove, Ill.) finished in second place at the 71st Illinois Open. He entered the final round tied for seventh at 1-under-par, and turned in a final round score 3-under-par 69 for a tournament total 4-under-par 212. Korzon’s final round featured just one bogey, two birdies and an eagle on the par-5 17th hole for a solo second place finish. This is Korzon’s best finish at an Illinois Open. He had missed the cut at his previous three starts.

“I've got to give it up to White Eagle and the Illinois PGA,” said Korzon. “This course was set up so hard it felt like the U.S. Open.  I finally broke through this year and hopefully it’s the start of many good finishes at this event.”

“It’s pretty special to win Low Am,” said Less. “Obviously it was pretty hard to qualify this year because the field was cut in half. Pretty much half the field had a really good chance to win this tournament. Finishing atop the amateurs shows my game is turning in the right direction. I’m looking forward to going back to Northern Illinois for one last year and coming back here next year.”

The Illinois PGA would like to thank White Eagle Golf Club, their staff and all their members for their support throughout the 71st Illinois Open Championship.