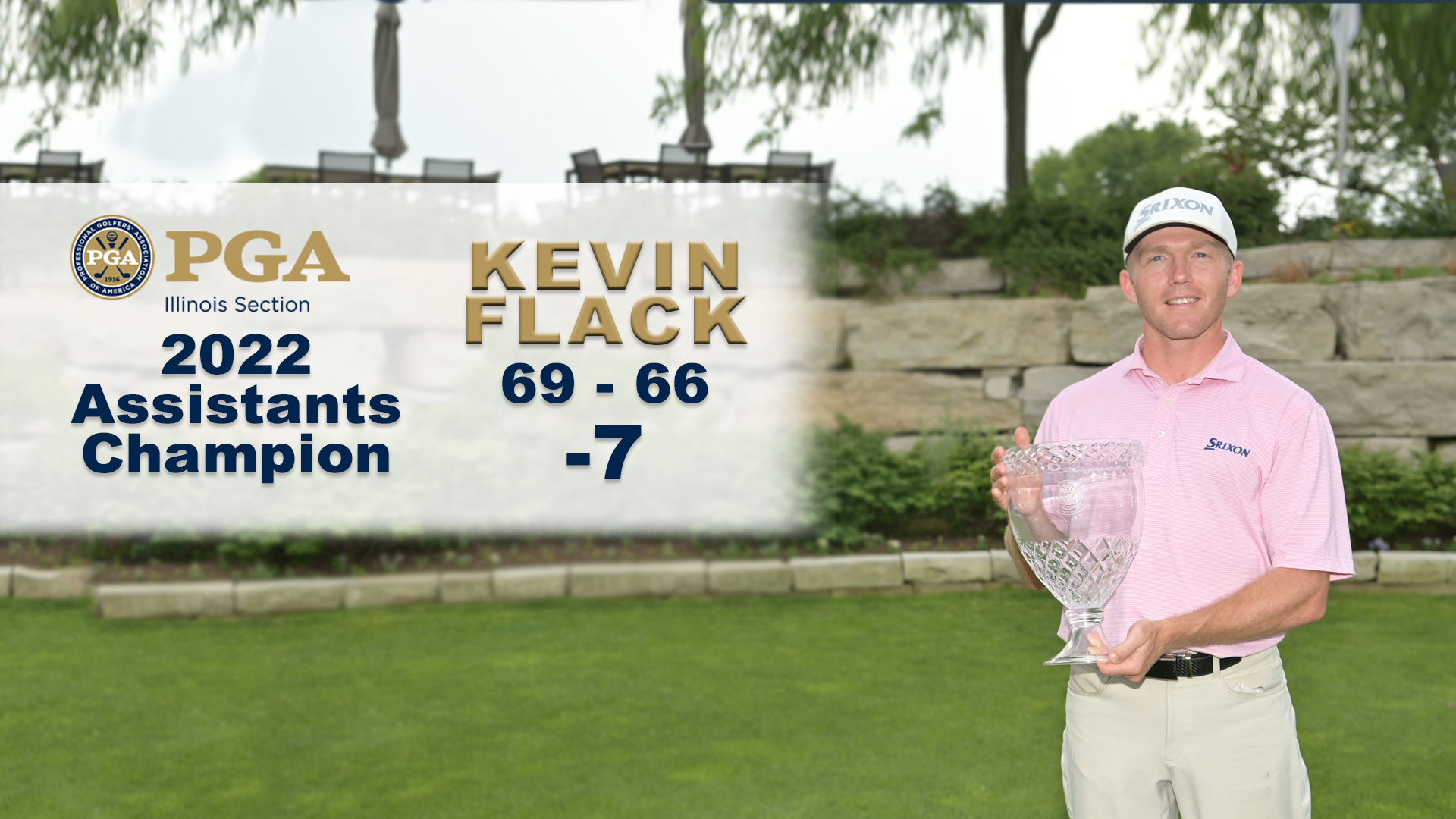 “I felt like I knew where my ball was going all day,” said Flack. “I was just trying to pick my spots where I wanted to try and make birdies. There are some tough holes out here that I knew par would be a great score. I made some six-foot putts for par in the middle of the back nine of the final round which kept my momentum going. Playing with Chris (French) and Paul (Schlimm) helped because they were hitting some really good shots as well so that kept me in it all afternoon.”

Flack turned in a winning total of 7-under-par 135 to capture his third National Car Rental Illinois Assistant PGA Professional Championship in four years. He recorded a 2-under-par 69 in round one and a 5-under-par 66 in round two.

Flack entered the final round trailing Schlimm by one stroke after a first-round score of 2-under-par 69. He turned it on in the second round, birdieing two of his first three holes to move into the lead early on. He remained steady through the front nine making six straight pars to make the turn with a two-stroke lead.

French, a fellow Rockford-based Illinois PGA Professional, kept the pressure on Flack throughout the final round. French made the turn in the final round trailing by two strokes. Flack made birdie on 10 to increase his lead to three strokes. Both players hit great shots into the par-3 12th hole. Flack left himself above the hole and just missed his birdie putt. French knocked in a mid-range birdie to get to 4-under-par.

Matching pars on 14 and 15 kept the leaderboard the same as the final group stepped up the par-5 15th hole. After leaving his approach in the bunker, Flack was able to two-putt for par and remain at 5-under-par for the tournament. French hit his approach shot to about 15 feet and made the birdie putt to cut Flack’s lead to one stroke.

Both players stepped up and hit good tee shots into the par-3 16th hole. Flack was away, leaving himself over 20 feet for birdie. He made the putt to move to 6-under-par and put the pressure on French to keep it close. French had about 15 feet left for his birdie. His putt hit the lip and spun out, leaving him a tap-in for par and he remained 4-under-par. Flack carried a two-stroke lead into the final two holes of the day.

“Having played the 16th hole earlier in the day, I knew what club I needed to hit,” said Flack. “I still had a one-shot lead going into that hole, so I didn’t change my gameplan at all I was just trying to hit the green and luckily that putt went in.”

After a routine par on 17, Flack made a two-putt birdie on his 36th hole of the day to secure the championship. French, meanwhile, made bogey on the 17th hole after hitting his tee shot right into the 13th fairway. He would make par on 18 to finish second and secure his qualifying spot.

Schlimm had a strong showing in the first round. He carded a 3-under-par 68 in the opening round and was leading by one stroke. Despite struggling on the front nine in the final round, Schlimm battled on the back nine to grab the final qualifying spot. He made birdie on the 10th hole to get into a tie for third place. Like his playing partners, Schlimm also hit a good shot into the 16th hole and made birdie, giving him solo third place with two holes to play. He failed to get up and down on 17 and dropped to 1-under-par for the tournament. He lipped out his birdie bid on the 18th hole, but par was still good enough to give him solo third place and punch his ticket to his second consecutive National Car Rental Assistant PGA Professional Championship.

The National Car Rental Assistant PGA Professional Championship brings together a field of 132 contestants representing the PGA of America’s 41 nationwide Sections and features a total purse of $150,000. All rounds will be played on the Wanamaker Course at PGA Golf Club. A cut after 36 holes of play will be made to the low 70 scorers and ties.

If eligibility is met and maintained, the champion earns a berth in the 55th PGA Professional Championship.