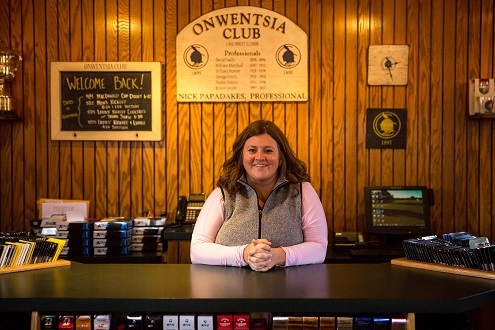 Everything was going according to plan for Cary, Ill. native and Methodist University PGA Golf Management Program (PGM) student, Claire Castetter, as she worked her way through school and internship requirements. First internship at Essex Country Club in Massachusetts, check. Second internship at the Middle Atlantic PGA Section, check. Third internship started at The Greenbrier, check. Things were looking real good at about this time.

Following her junior year, she reported for work at the famed Greenbrier resort in White Sulphur Springs, West Virginia full of enthusiasm and excitement to have earned such a coveted position. And then the floods came. Only two weeks before the 2016 Greenbrier Classic was scheduled to be played, the state of West Virginia was ravaged by record-setting rain, causing extreme flash flooding. And there was no way a PGA TOUR event could be held. The Greenbrier Classic, such a source of pride in an area not used to hosting big-time events, was canceled a week after the flood.

“The courses were destroyed and we knew everything would be shut down there for a while. I was worried about how I was going to finish up my five-month internship without being set back for graduation and getting my PGA membership,” recalls Castetter. “I moved back home with my parents and, with the help of the PGM program staff at Methodist, was put in touch with Nick Papadakes, PGA at Onwentsia Club and Carrie Williams at the Illinois Section PGA.”

And, here’s where the Illinois PGA Foundation and its GolfWorks Illinois program came in to play.

“GolfWorks Illinois brings PGA Professionals and industry leaders together to be mentors to high school and college students interested in learning the business side of golf, giving back to the community and earning financial assistance towards college,” says Carrie Williams, executive director of the Illinois PGA Section and Illinois PGA Foundation. “Through this program, we were able to provide the funding to support Claire working at both the Section and Onwentsia for the rest of the season.”

GolfWorks Illinois, a program administered by the Illinois PGA Foundation, is a vocational development program for Illinois high school and college students that promotes learning through hands-on work experience in the golf industry. Working together with local golf facilities and youth golf organizations, interns are exposed to experiential learning through a 10-12 week internship, service learning by participating in golf-related service projects and classroom learning encouraging the attainment of higher education.

“I was obviously upset that I had to leave such a great place as Greenbrier, especially with such a long road to recovery ahead of them, but I ended up having such a great opportunity to transition here in the Illinois Section,” said Castetter.
In Summer 2016, Castetter split her time between working at the Section on events such as the Illinois Open and Illinois PGA Championship and assisting Papadakes and the team at Onwentsia with running the pro shop, organizing events and managing tournaments. Castetter’s knowledge of the game, positive attitude and friendly personality was a great fit with the historic club’s staff and membership. In fact, several Onwentsia members are also members at The Greenbrier and they were able to console one another about the terrible disaster that had affected the resort and surrounding communities for which they all had a special affinity.

“I think the GolfWorks Illinois program is great for local facilities because we get to find young men and women from the area who know our customs, know our culture and know our language,” said Papadakes, Head PGA Professional at Onwentsia Club. “So they fit right in and it gives them great exposure to clubs they might not get to experience based on being at the entry level.”

Castetter’s introduction to golf began when she was five years old and her mother, off for the summer from her school teacher job, would play in women’s leagues and her grandpa would meet them at the course and bring her to the range and putting green while her mom was on the course. And, she often joined her grandpa on the course near his home in Florida during spring breaks. But it wasn’t until Castetter was 12 that she took a real interest in the game. And, later she played on the high school golf team and began working at Woodstock Country Club where she really got the bug for the business side of the game.

“I chose a PGM program for college because I saw it as the best of both worlds. I could be around my favorite hobby for the rest of my life, but would also have a business degree if I ever felt I wanted to leave the golf business,” said Castetter.

The PGA Golf Management University Program, accredited by the PGA of America, is offered at 19 universities nationwide. The program provides extensive classroom studies, internship experience and opportunities for player development and prepares students with the knowledge and skills to succeed in the golf industry as a PGA member. Students can earn a degree in areas such as Marketing, Business Administration, Hospitality Administration, Recreation and Park Management.

Both the PGM program at Methodist and The GolfWorks Illinois program opened up doors for Claire to see all the different options she had within the golf industry. Before getting involved in the programs, she wasn’t aware of all the different avenues she could take while being a PGA Professional.

“I definitely think it’s a benefit to try different types of positions within the industry because it helped me narrow down what I really wanted to focus on. I worked at some great traditional green-grass facilities, as well as for two PGA Sections running events,” said Castetter. “Between the staff and alumni at Methodist University, Nick at Onwentsia and Carrie and the Illinois PGA staff, I was able to do some unbelievable networking and find some great mentors."

Nick Papadakes may be the 2017 Bill Strausbaugh Award winner recognized for his day-to-day efforts last year to mentor fellow PGA Professionals in improving their employment situations but make no mistake he’s been helping young people interested in the game his entire career.

“I don’t know any other way,” said Papadakes. “From the time I was a young teen growing up in eastern Iowa to the time I moved to the Chicago area, I have benefitted from the relationships I have made in the game. So, I want to do the same for people like Claire and others who have worked for me over the years.”

Papadakes has a fondness for all the interns who have worked for him over the years but is most proud of the fact that they continue to keep in touch with him. “Most all of them continued in the golf business in some capacity,” he says. “And it’s fulfilling to know that perhaps I had a hand in helping good people find good jobs in the industry.”

As for Claire, Papadakes says, “She is a wonderful presence for our operations and a perfect fit for our culture and club. She makes everyone feel good about themselves when they come into the golf shop, and she spends a lot of time trying to find out how to get better at what she does.”

Castetter recently earned her PGA Membership in December 2017 and is now Assistant PGA Professional at Onwentsia with increased responsibilities this season running the pro shop operations, teaching, helping Papadakes with merchandising and ensuring that the members and guests have the best time they can while on the property.

As for her grandpa, “He’s no longer with us but I know he would be really proud of me working in the game and becoming a PGA Professional.”