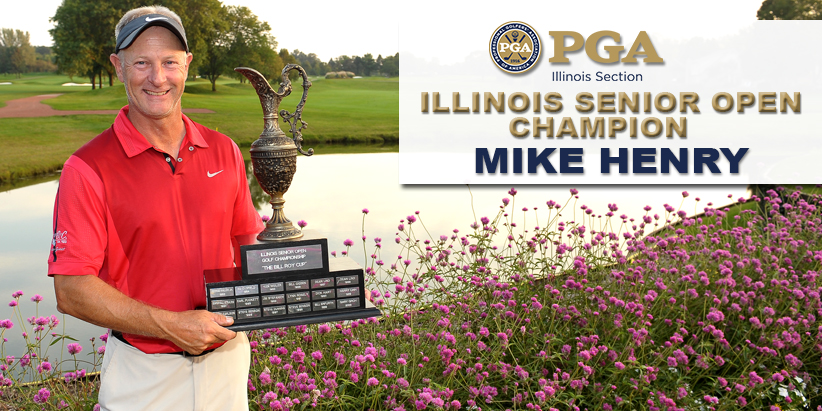 ST. CHARLES, Ill. – September 17, 2019 – Mike Henry of Bloomington, Ill. and Rich Dukelow (Medinah CC) finished the final round the same way they started it, tied for first. Both players recorded 3-under-par 68s in the first Round and carded even-pars in Round two.

A three-hole playoff was needed to decide the outcome of the 2019 Illinois Senior Open at Royal Fox Country Club. In the end, Henry would come out victorious.

The three-hole playoff started on the par-5 10th hole. Both players missed the fairway with their drives, but Henry was able to get up and down for birdie to take a one-shot lead. Henry and Dukelow both found the green on the par-3 17th hole. Dukelow, playing second, attacked the flagstick, leaving himself about a 10-foot putt for birdie. Henry left his birdie opportunity short, and Dukelow tapped in for birdie, tying Henry heading into the final hole.

The final hole of the playoff was the par-5 18th hole. Both players elected to lay up short of the water with their second shots. Dukelow’s approach shot missed the green long and Henry stuck his shot a few feet from the hole. Following a par save from Dukelow, Henry sunk his birdie putt to claim his first career Illinois Senior Open.

Henry carried over his solid play from Round one, making the turn in Round two at even-par 35. He carded a bogey on the par-4 fourth hole but responded with a birdie on the very next hole to keep himself at 3-under-par for the tournament. The back nine was more of the same. Henry bogeyed the par-3 11th hole and birdied the par-5 14th hole to bring himself back to even-par for the day. Following four straight pars to close out the Round, Henry finished at 3-under-par 139 and forced a playoff against Dukelow, where we would go onto secure his victory.

Dukelow battled through the front nine in Round two, carding four bogeys and two birdies to make the turn at 2-over-par 37, and fall two strokes behind Henry. The back nine proved to be better for Dukelow, who went bogey-free and birdied holes 10 and 12 to get back to even-par for the day (71), and finish at 3-under-par 139 for the tournament.

Palatine native, Bryan Luedtke finished in solo third place. Following a 1-over-par 72 in Round one, Luedtke bounced back with a 3-under-par 68 in the final Round to finish with a tournament total 2-under-par 140.

Groszek carded a 1-under-par 141 for the tournament to finish in solo fourth place, while Paeglow finished at even-par (142) to take home fifth place.