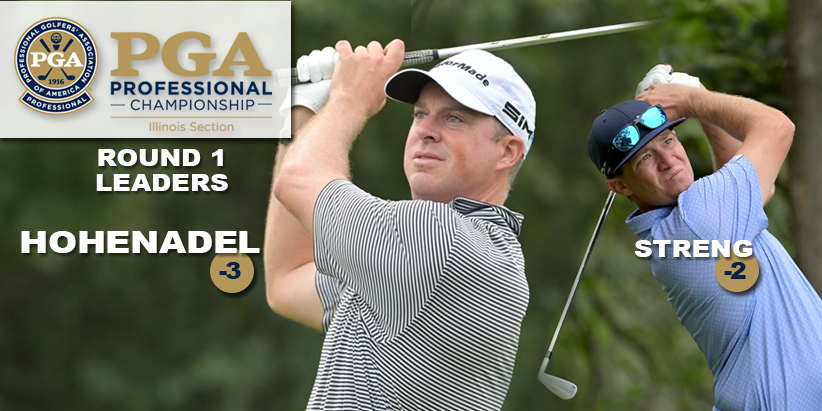 Hohenadel started his Illinois PGA Professional Championship on the back nine but didn’t make his push for the lead until later in the round. He quickly fell to 1-over-par with a bogey on the par-4 12th hole. He got to even-par with his first birdie of the day on the par-5 14th hole. With just five holes to play in round one, Hohenadel found himself a couple of shots off the lead, which had been fluctuating between one and two under par. A birdie on the fifth hole brought Hohenadel within one stroke of the lead. He took the lead with back-to-back birdies on holes eight and nine to finish the day in solo first place with a 3-under-par 69.

“It was a struggle on the front today. I was not hitting it very well,” said Hohenadel. “I came out a little rusty after our member-guest over the weekend. The front nine was not pretty. I had a lot of par saves and one birdie and one bogey. It was an easy birdie too. It was just a kick-in on a par 5. Finally, I made a little adjustment at the turn and got it going on the back and the birdies started dropping.”

Hohenadel, who won this event in 2011, is looking for his second victory at this event and has also qualified for the National PGA Professional six times in his career.

“It’s been a decade since I last won this. A lot has happened since then,” said Hohenadel. “2011 was the year I got membership; I was just a kid. At that time, I didn’t really know where I was, but now this means a lot more to me and it’s a little more stressful.  I’ve qualified six times for the National PPC and one of the things you learn is to play to win. If you’re playing for the top 10 spots, you’re going to be stressed all week. So, I just play to win the tournament and if I don’t and finish 10th then I’m okay with that. The goal is always to qualify, but I’ve learned you have to stay aggressive.”

Tim Streng (Wildcat Golf Academy) holds sole possession of second place following a 2-under-par 70 in round one of the Illinois PGA Professional Championship. Streng kept the card clean today, going bogey-free, with two birdies on holes 12 and nine. Streng was in a tie for second most of the day at 1-under-par, but a birdie on his final hole of the day got him to 2-under-par, putting him in solo second.

“I was just trying to keep the ball in play today. That’s the name of the game out here,” said Streng. “I was smoking hot with my putter, that’s what kept me in it. I hit the ball well, but I was just trying to play it smart. Getting out of the gates was a big focus for me. I started horrendously at the Illinois Open and knocked myself out after a few holes. My goal today was to stay patient and make a bunch of pars. You can get yourself in trouble out here if you aren’t straight off the tee. I stuck to the game plan and was able to execute. I didn’t make a bogey today so that was nice.”

Four players are tied for third place following round one. Among this group is 13-time Illinois PGA Professional Champion Mike Small (University of Illinois Golf Club). Similar to Hohenadel, Small strung together a solid a back-nine to stay within striking distance of the lead. An opening hole birdie got small to 1-under-par, but he made double-bogey just two holes later on the par-4 12th hole. Small carded a bogey-free back nine with birdies on three and nine to finish the day at 1-under-par 71.

“I was for looking even-par and a solid round today,” said Small. “I haven’t been hitting the ball very well. I try not to set expectations, but I would say I exceeded them today. It’s fun to play in this event. I’ve had success at this event in the past and it’s fun to play good golf courses against good players. This feeds into the National Club Pro, which I’ve won three times, and means a lot to me. The National Club Pros are probably the biggest events I’ve won in my career, and I see this as part of that tournament.”

Andy Mickelson (Mistwood Golf Club) is also tied for second heading into the second round. Mickelson, who has finished inside the top five at this event in back-to-back years, held the lead for a brief period during the first round. Mickelson started the day with five straight pars before making back-to-back birdies on holes 15 and 16 to take the lead. He would fall back into a share of the lead at 1-under-par with a bogey on the par-4 first hole. Mickelson got back into a share of the lead with a birdie on the par-3 fourth hole and had sole possession of the lead on his final hole of the day. However, a bogey on the ninth hole dropped him back to 1-under-par 71.

“I played really well on the back nine, which was my first nine,” said Mickelson. “I felt comfortable out there until getting to the first hole. I’ve had some bad luck there in the past. This is just not an easy golf course to stay comfortable on. You have to plot it around out there and hit your spots. I’m happy with the total score, but I feel like I could’ve scored better. It’s just a hard course to score on. It would be huge to win this. It would be my first major as a PGA Member. When you start projecting and start thinking about what’s ahead it can get in the way of what you are doing in the present. I try and stay focused on the present and take whatever shot I have sitting right in front of me.”

Garrett Chaussard (Skokie Country Club) also finished T2 and was also in a share for the lead at one point during round one. Chaussard began round one with four straight pars before making back-to-back birdies on holes 14 and 15 giving him an early share of the lead. A double-bogey on the par-4 16th hole dropped Chaussard back to even to par. Chaussard went on to make 10 pars in a row before birdieing the par-5 ninth, his last hole of the day, to get back to 1-under-par.

Eric Ilic (Merit Club) had a back-and-forth opening round but found himself tied for third at 1-under-par 71. Ilic started his round with a bogey on the par-4 10th hole but quickly got back to even-par with a birdie on the par-4 12th hole. Two holes later, Ilic carded another bogey bringing him back to 1-over-par. A birdie on the par-3 17th got Ilic back to even par as he made the turn. Another bogey on the first hole again brought Ilic back to 1-over-par for the day, however, it would be his last bogey of the day as he made birdie on holes four and nine to finish the day at 1-under-par.

There is a two-way tie for seventh place between Steve Gillie (Randall Oaks Golf Club) and Travis Hall (Rolling Green Country Club). Both players recorded even-par 72s in round one and are currently in contention for qualifying for the National PGA Professional Championship.