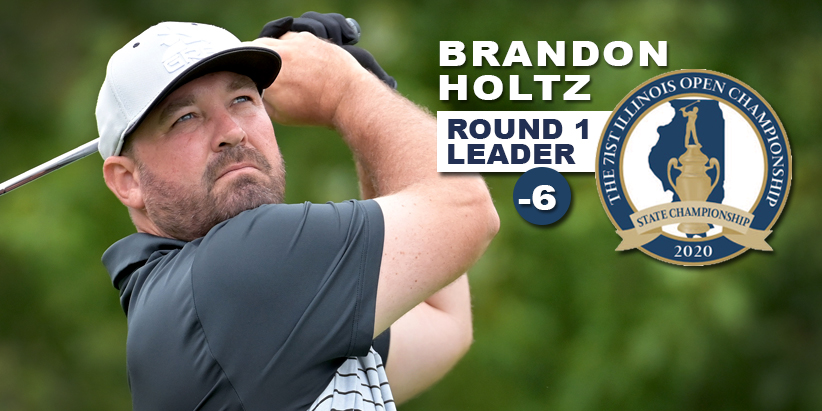 “Setting the new course record is pretty sweet,” said Holtz. “This course is phenomenal. The greens were great today. From the start I just hit it good. I had a few miss hits off the tee that put me in some bad positions. But overall, it was a good day.”

Holtz started his day on the back nine of White Eagle Golf Club, where he carded a bogey-free nine holes with four birdies. He birdied holes 16, 17 and 18 to make the turn at 4-under-par 32. After bogeying the par-4 first hole, Holtz bounced back with four birdies in a row on holes two through five. He registered back-to-back bogeys on holes seven and eight, but finished the round with a birdie on the par-4 ninth hole to finish with a 66.

“He set the modern-day course record today. He played unbelievable,” said Holtz’s playing partner Curtis Malm, Director of Golf at White Eagle Golf Club. “It was tough out there today. The wind started to pick up a little, but he hit a lot of good golf shots. He missed a couple of putts; it could’ve easily been a 64. It was fun to watch, he’s a really great guy and has a ton of talent. He hits the ball a mile and he hits it pretty straight and is really good with his wedges. He should do well this week.”

White Eagle Golf Club underwent a large course renovation in 2019. This renovation made some drastic changes to the course including green expansions, tee additions and new bunker placements. Prior to the renovation, Tiger Woods set the original course record at 67.

Holtz has seen success in the Illinois Open in recent years. He’s finished second twice at this event in 2017 and 2018. He also holds the third best 54-hole score by a non-winner in tournament history. In 2019, he finished seventh.

Brian Bullington (Frankfort, Ill.) and Patrick Flavin (Highwood, Ill.) are tied for second following 3-under-par 69s in the first round.

Bullington started his day with a bogey on the par-4 10th hole. He would get back to even par with a birdie on the 13th hole. He then eagled the par-5 17th hole to make the turn at 2-under-par 34. Bullington made double bogey on the first hole before making three straight birdies on holes four, five and six. He dropped one shot on the par-3 eighth hole, but got it back with a birdie on his finishing hole to shoot 69.

Flavin also started his day on the back nine. He went bogey free on the back with birdies on holes 11, 14 and 15 to make the turn at 3-under-par 33. Flavin’s bogey free stretch continued on the front nine. He made four straight pars before birdieing the par-4 seventh hole. His only bogey of the round came on the eighth hole, and he made a five-footer on his last hole of the day to shoot 3-under-par 69.

“It was a tough track out there today,” said the 2017 Illinois Open Champion. “I have my good friend Dirk Anderson caddying for me today. I think today is a credit to him. He was a big help. I’m looking forward to getting back after it tomorrow morning. The greens will be perfect and the weather should nice. I’m excited to get it rolling.”

Derek Meinhart (Mattoon, Ill.), Ricardo Leme (Lake Villa, Ill.) and Kyle Slattery are tied for fourth place after carding 2-under-par 70s in the first round. Meinhart and Leme are also the low amateurs heading into round 2.

Second round tee times will begin at 7:30 a.m. off holes one and 10. Following tomorrow’s round, the field will be cut to the low 50 players and ties and anyone within 10 strokes of the lead.