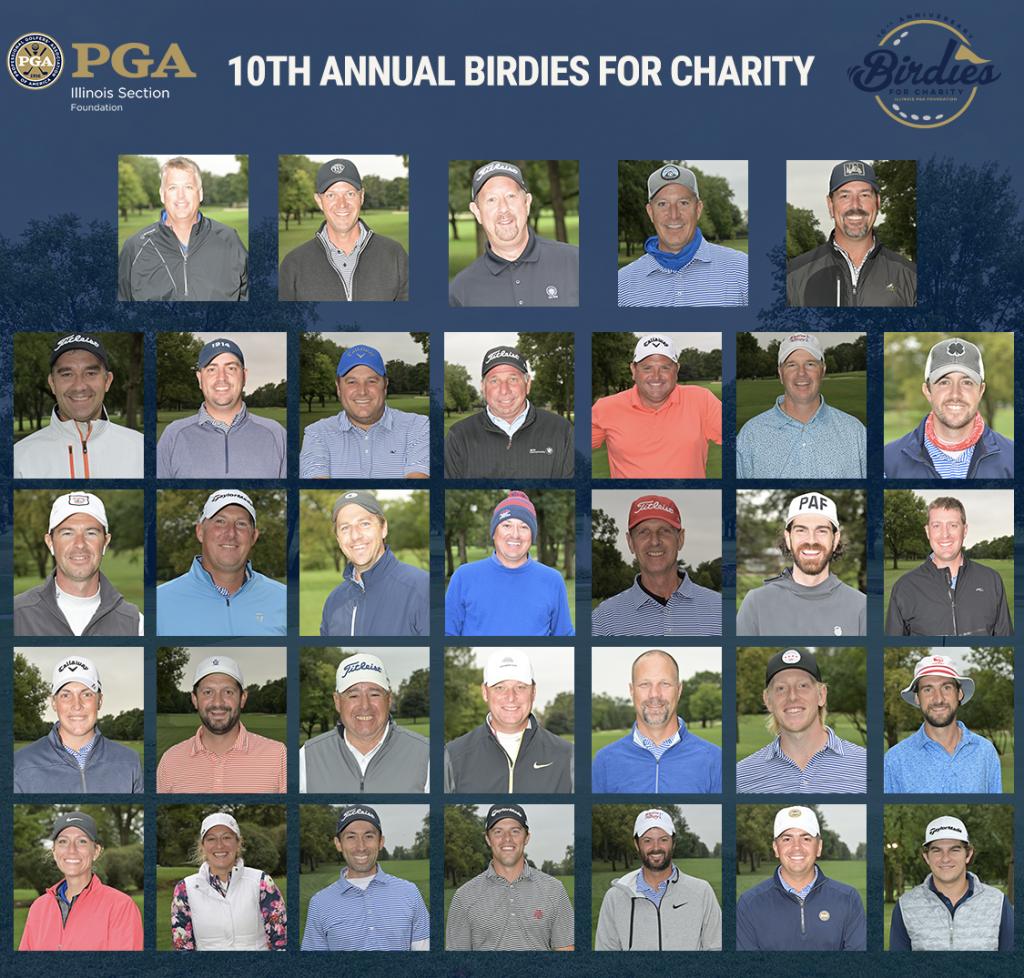 GLENVIEW, Ill. – September 16 2020 – The Illinois PGA Foundation Birdies for Charity Section fundraiser returned to River Forest Country Club in Elmhurst, Ill. for its 10th annual event on Tuesday, September 8. In conjunction with the Section event, the Central Illinois PGA (CIPGA) Chapter held its third Annual Birdies for Charity at Country Club of Decatur in Decatur, Ill. A total of 40 Illinois PGA Professionals participated in this year’s events and together, combined to raise over $350,00 bringing the 10-year total amount raised to $2.31 million.

Illinois PGA Professionals teamed up to make 1,042 birdies and raised funds to benefit children’s charities including the Ann Robert H. Lurie Children’s Hospital of Chicago, JDRF Illinois Chapter, Ronald McDonald House Charities of Chicagoland and Northwest Indiana, Advocate BroMenn Neonatology Program in Normal, Ill., The Children’s Hospital of Illinois in Peoria and the Illinois PGA Foundation. The total amount from each event will be divided equally among the corresponding charities for the Section and Chapter events.

“This event is circled on our members’ calendars every year as they look forward to playing golf to help children’s charities and try and achieve new fundraising goals they set for themselves,” said Carrie Williams, Executive Director of the Illinois PGA and Illinois PGA Foundation. “Surpassing $2 million in 10 years shows that our Professionals and their support systems understand that these charities are doing outstanding work in our communities and are committed to raising as much money as they can.”

Despite a heavy downfall of rain that delayed play for about two hours at River Forest Country Club, majority of the Professionals were still able to get in five full rounds of golf (90 holes). Each participant played a minimum of four rounds (72 holes).

“The rain delay slowed the start of the event this year, but certainly not the desire of the professionals to complete five rounds and raise as much money as possible,” said Chris Gumbach, host PGA Professional at River Forest Country Club and event co-chair. “To see our colleagues in the Central Illinois PGA Chapter contribute to the total despite the unfortunate weather just makes this event that much stronger and beneficial to more charities, families and communities. Surpassing $2 million is a great accomplishment. We didn't think we would accomplish this feat so fast, but this just shows how dedicated everyone is to this event and how important today is to everyone associated with the Illinois PGA Section and Foundation.”

Brian Carroll (The Hawk Country Club) carded the most birdies at River Forest, totaling 47 and raising over $17,000 this year. Gumbach once again led the way in money raised at the Section event totaling 18 birdies to raise over $30,000.
This year, former Chicago Bear Patrick Mannelly joined the group of Illinois PGA Professionals at River Forest to help raise both awareness and dollars for the four charities. Mannelly made a total of 17 birdies and raised over $2,000 throughout the day.

“I was honored to be a part of this event and be the celebrity ambassador,” said Mannelly. “What the Illinois PGA Foundation and these Illinois PGA Professionals are doing with Birdies for Charity is truly amazing and I’m proud to say that I was able to contribute to this year’s event.”

Meanwhile, at the CIPGA Birdies for Charity event, Nick Taute (South Side Country Club) carded 29 birdies in 45 holes leading the Chapter in birdies made for the second straight year.

Birdies for Charity was created in 2011 when Travis Johns (Medinah Country Club) brought the concept with him from the North Texas PGA Section and proposed it to the Illinois PGA Section Board. At the time, Gumbach was the sponsorship chairman and immediately thought this type of event was just the kind of community involvement program the Section and its Members needed to rally around.

The Illinois Section of the PGA of America is a professional organization serving the men and women golf professionals in northern and central Illinois who are the recognized experts in growing, teaching and managing the game of golf. The Illinois PGA is responsible for the administration of competitive golf tournaments, educational opportunities, support programs and growth of the game initiatives. With over 840 members and apprentices, the Illinois PGA is one of the 41 regional Sections that comprise the PGA of America. The Illinois PGA Foundation focuses its community efforts on promoting the goodwill and growth of the game with an emphasis on activities that benefit youth. Foundation initiatives include: GolfWorks Illinois, Youth-based Scholarship Funds and the Illinois Golf Hall of Fame. For more information about the Illinois PGA and the Illinois PGA Foundation, please visit www.www.ipga.com and join us on Facebook, Twitter or Instagram.