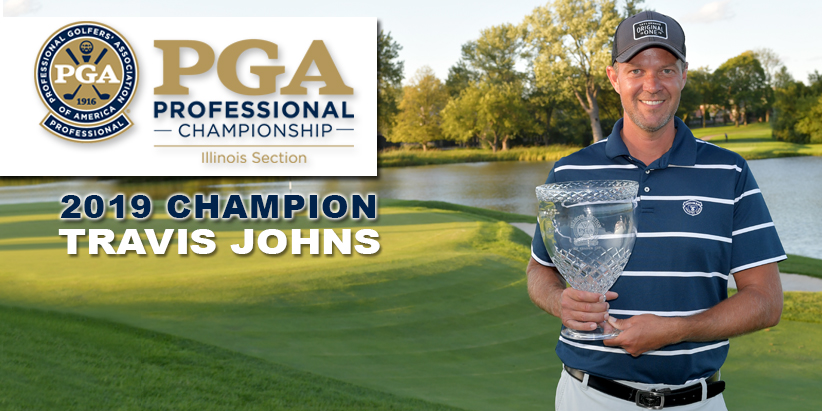 Johns entered the final round tied for fourth after a 1-under-par 70 in the first round. In the hunt for his first ever Illinois PGA Professional Championship, Johns needed to chase down 12-time Champion, Small. A situation that Johns is all too familiar with.

“When I was a kid from the age of 13-18 there was a tournament in Australia and one of my good friends beat me five years in a row,” said Johns. “When I’m playing against Mike (Small), especially at Olympia Fields, it brings back memories of my friend wiping the floor with me and coming in second. But, it’s nice to learn from Mike (Small) and all the other pros here in the Illinois Section.”

Following a 1-under-par 35 on the front nine, Small bogeyed holes 10, 11 and 12 to let a number of players back into contention. A double bogey on 14 brought Small to 6-over-par for the day.

Meanwhile, just ahead of Small was Johns who was closing the gap. Johns made the turn at even-par but came alive on the back-nine. Johns made an impressive birdie on the par-4 10th hole after driving the green.

“I’ve probably played Ruth Lake 15 times and I’ve never laid up on 10. I always go for the green,” said Johns. “The first day they had the tee box close to the hedge on the right, so for a lefty I couldn’t get it around, but today the tees were up and luckily I hit a straight drive just over the flag stick to about 25 feet.”

The birdie on 10 was just the beginning for Johns. He would go on to birdie holes 13, 14, and 15 to take a two-shot lead over his playing partner Garrett Chaussard (Skokie Country Club). Johns dropped a stroke on the par-4 16th hole but finished the round with two pars to win the Illinois PGA Professional Championship by one stroke. In total, Johns carded a 4-under-par 138 en route to his first career Section Championship victory.

“I had no idea what was going on behind us, which was probably a good thing,” said Johns. “I think it all happened pretty quickly with a few bad holes for the guys behind us, and a good string of about four holes that I was about 3-under and that sort of flipped everything.”

Chaussard also started the day T4 and made the turn at even-par in the final round. A bogey-free back nine and birdies on holes 13 and 15 brought him into the mix heading down the stretch. A nice up-and-down from a greenside bunker on the 16th hole brought Chaussard within one-stroke of the lead. He would go on to par the final two holes and finish the tournament in solo second place with a 3-under-par 139.

Brian Carroll (The Hawk Country Club), who started the day in third place, and Small finished T3 with tournament totals of 1-under-par 141.

The Illinois PGA would like to thank Nadler Golf Cars and all the National Sponsors for their support in this event, as well as Ruth Lake Country Club for hosting this event.