Kelly Extends His Lead in Round Two, Holds Four-Stroke Lead 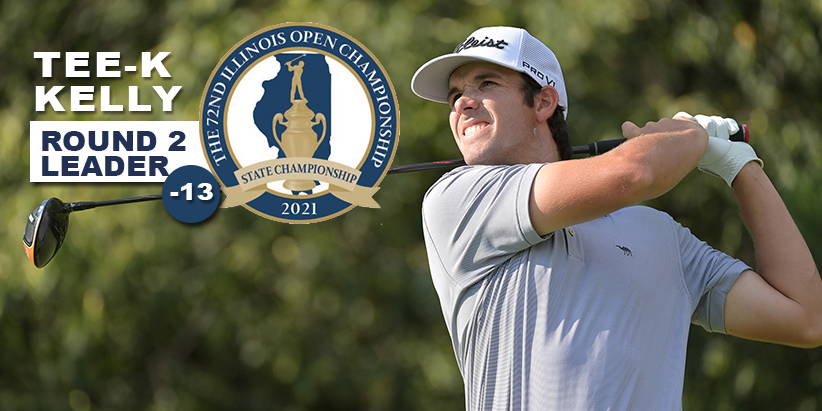 AURORA, Ill. – August 3, 2021 – Tee-K Kelly (Wheaton, Ill.) extended his lead in the second round of the 72nd Illinois Open Championship after carding a 7-under-par 65 for a tournament total 13-under-par 131. He holds a four-stroke lead entering the final round.

After a first-round 66, Kelly found himself trailing by three strokes on Tuesday afternoon due to a great second round in the morning wave by Luke Gannon (Mahomet, Ill.). Kelly got off to a hot start chipping in for eagle on the par-5 first hole and quickly closed the gap. He dropped back to two off the lead with a bogey on the second hole. He bounced back quickly though, making birdie on the par-3 third hole. Kelly added another birdie on the par-4 fifth hole to get to 9-under-par for the tournament and tie Gannon for the lead. He would hold onto his share of the lead through the front nine and turn at 3-under-par for the day.

“I’ve been playing awesome this week. I played a little scrappier today,” said Kelly. “I wasn’t hitting my driver as well, so I was picking my spots a little bit out there. I made some nice par saves on the front nine that kept my round going after the hot start. After a round like yesterday, you’re warming up just hoping you can put together another good round. But even when you are playing your best you still have little butterflies on the first tee because you want to get your round off to a good start. Then when you make an eagle on the first hole you can kind of relax a little. We were pumped when that went in, it was a dream start coming off of yesterday."

“I played the last eight holes 4-under-par, so I was able to find a little something there towards the end to take it home,” said Kelly. “I’ve been trying to play super patient and wait for those runs to happen. Today it happened out of nowhere. I was hitting it all over the place today. I hit it in the woods on 10, chipped out and got up and down for par. Then hit a good tee ball on 11, hit a tight iron shot to make birdie. Then stuffed a shot on 12 but missed the putt. I was kind of cruising from there. I hit a 4-iron to about 12 feet on 14, made that for eagle. It was kind of a rocky start until that stretch, and I just hit a bunch of quality shots coming in.”

Gannon posted the number to beat in the morning wave of the second round. He entered the round tied for second following a 4-under-par 68 in round one and trailed Kelly by two strokes. Starting on the back nine, Gannon carded three birdies in-a-row on holes, 12-14 to take sole possession of the lead at 7-under-par. Two groups in front of him was Blake Olson (Wheeling, Ill.) who kept things close. Gannon dropped a stroke at the par-4 16th hole and fell into a three-way tie for first place with Kelly and Olson.

Up ahead, Olson was putting together a nice round of his own. He also finished round one tied for second with a 4-under-par 68 in the opening round. He started on the back nine as well and opened his round with a birdie on the par-4 10th hole. After dropping back to even-par for the day on the 11th hole Olson made birdie on the par-5 14th hole and par-5 18th hole. He made the turn at 6-under-par for the tournament and trailed Gannon by one stroke.

Olson took a share of the lead with another birdie on the par-5 first hole and then tied the lead again with a birdie on the fourth hole. However, trouble down the stretch saw Olson give his lead up. He made double bogey on the par-4 fifth hole and made another bogey on the seventh hole to drop to 5-under-par for the tournament and tied for third place.

Meanwhile, Gannon was taking advantage of the window that Olson had left open for him. He made back-to-back birdies on holes 18 and one to get to 8-under-par. He made his final birdie of the day on the par-4 fourth hole to get to 9-under-par and took a three-shot lead into the clubhouse.

“I started two back today, so I figured I probably wouldn’t be leading after the second round,” said Gannon. “I think I’m still in range, but I just have to get ready for tomorrow and whatever happens, happens. I never led after two or three days of a tournament since I turned pro a few years ago. I don’t really think about chasing the lead or protecting a lead, as long as I have a chance tomorrow, that’s all that matters.”

After an even-par 72 in round one, Albano, Jr. carded a five-under-par 67 to climb the leaderboard and get into third place. McClear followed up his opening-round 2-under-par 70 with a 3-under-par 69 and Stringfellow carded a second-round 4-under-par 68 to join the four-way tie for third place.

Adam Turner (a.r.) (Galesburg, Ill.), Garrett Chaussard (Park Ridge, Ill.) both carded even-par 72s in the second round after their 4-under-par 68s on day one. Roy Biancalana followed up his 1-under-par 71 with a 3-under-par 69 today. All three currently sit in a tie for eighth place and are nine strokes off the lead.

Following the conclusion of the second round, the field was cut to the low 50 plus ties. The cutline was 4-over-par 148. 53 total players made the cut. The final round of the 72nd Illinois Open Championship takes place tomorrow at Stonebridge Country Club. Tee times will begin at 8:00 a.m.