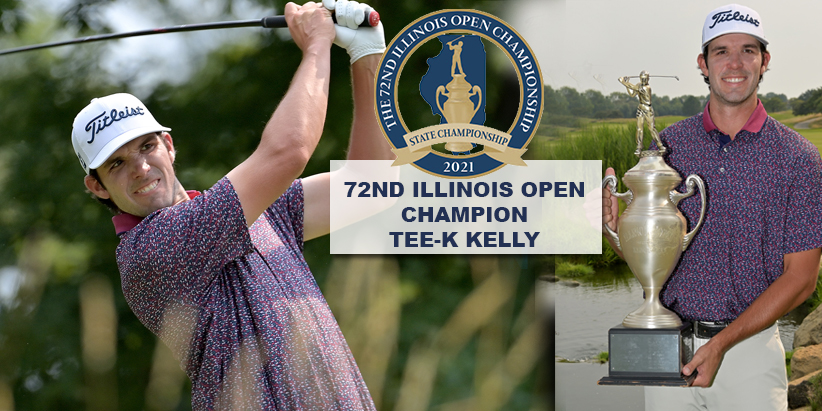 “It feels amazing to win this tournament,” said Kelly. “I feel like I’ve put myself in contention a few times here and I was in contention the whole tournament last year. It’s fun to win one. Winning golf tournaments is never easy but it sure is a lot of fun when you pull one off.”

Kelly entered the final round with a four-stroke lead and never relinquished that lead. His final round started in a familiar fashion, birdieing the par-5 first hole. He would go on to card a bogey-free front nine with birdies on holes five, seven and nine and turn at 4-under-par for the day, 17-under-par the tournament.

Kelly’s strong play continued on the back nine as he parred the first four holes and held a three-shot lead over Luke Gannon (Mahomet, Ill.). An errant tee shot lead to a double bogey on the par-5 14th hole, which was only the second hole of the week that Kelly played over par. Clinging to a two-shot lead, Kelly responded with back-to-back birdies on holes 15 and 16 to get back to 17-under-par. He closed out his round with pars on 17 and 18 to secure his first career Illinois Open victory.

“In the past, that shot on 14 is something that would’ve shaken me up a little bit but with what I’ve been working on and having my brother on the bag it didn’t really affect me that much,” said Kelly. “I made a free golf swing and made a bad shot and just teed up another one. If that was my one loose drive for the week, I wasn’t going to hit another one. Then I hit a good drive down there and unfortunately doubled the hole. Hitting that second drive gave me a lot of confidence for the last couple of holes because I wasn’t going to lay down and let that affect me. I was going to go out there and win it, so that felt good.”

Prior to the 72nd Illinois Open Championship, Kelly had recorded three top 10 finishes in the Illinois Open over the last five years, including back-to-back top finishes in 2020 and 2019. His previous best finish came last when he finished T3.

“It felt good today,” said Hudson. “I had no idea about the course record so that’s obviously a nice bonus. A low round like that is super fun. I think the toughest thing when you get it to a certain point you want to keep it going but you don’t want to make any decisions that will alter the progress of the round so, I think mentally that’s the toughest thing when you get to six, seven or eight to keep things going. But it was a great day.”

Gannon, who started the day in solo second place made a push for the lead but was unable to chase down the leader. Birdies on the first two holes pulled Gannon within three strokes. He dropped back to 10-under-par after a bogey on the third hole. Gannon carded another birdie on the par-4 fourth hole, and sixth hole bringing him to 12-under-par. He trailed Kelly by three before he bogeyed the par-4 seventh hole. He made the turn at 2-under-par 34 and 11-under-par for the tournament.
Gannon had a small window on the back nine to catch Kelly. He birdied the par-4 10th to get to 12-under-par. He made five straight pars and got within two strokes when Kelly made double bogey but was unable to capitalize. He made two more birdies on his way in to finish with a 5-under-par 67 and a tournament total 14-under-par 202.

“It was just the start I wanted today. I knew I had a lot of ground to makeup and it was probably not likely that I could do that,” said McClear. “I hit it pretty well on the front but just couldn’t get the putts to fall. I kind of stopped hitting it well for a little stretch there and then brought it back at the end. Being Low Am is a good thing for me. Last year, there was another amateur that beat me, so it’s nice to get it this year and hopefully next year I can make a run at the title.”

Roy Biancalana (St. Charles, Ill.) was the low Illinois PGA finisher at the 72nd Illinois Open Championship. Biancalana started his tournament with a 1-under-par 71, then followed that up with a 3-under-par 69 in round two. He carded a 2-over-par 74 in the final round and finished the week tied for 14th place with a tournament total 2-under-par 214.