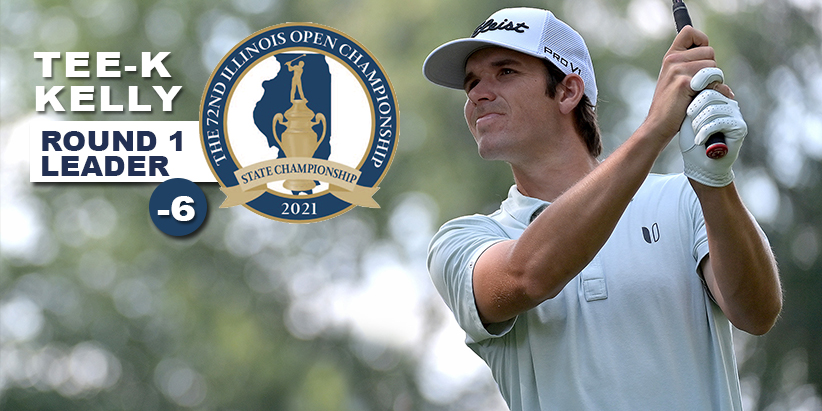 AURORA, Ill. – August 2, 2021 – Tee-K Kelly (Wheaton, Ill.) leads the 72nd Illinois Open by two strokes, following an opening round 6-under-par 66. Kelly, who has three top 10 finishes in the Illinois Open, will look to build on his lead as he pushes for his first career Illinois Open victory.

“It was a good day. I played really well in my last event, and I just have a calm confidence in my golf game right now,” said Kelly. “I’m driving it really well right now, which really helps out here. I wasn’t even trying to shoot a low number today; I was just trying to play smart. The course was setup difficult today, so I was just hitting smart iron shots and was able to get some putts to fall and keep the card clean, which always helps. I added up the card at the end and it was a low one.”

Kelly carded a bogey-free round with six birdies on the first day of competition. Starting on the back nine, Kelly birdied the par-4 11th hole to get his round started. He added a second birdie on the par-5 15th before parring the next four holes and turning at 2-under-par.

Kelly’s solid round continued on his back nine as he went on to birdie the par-4 second hole, par-4 fifth hole, and finished the day with back-to-back birdies on numbers eight and nine. Kelly’s first-round 66 was good enough to give him a two-stroke lead heading into day two.

“I’ve been playing my best golf lately, definitely the best I’ve played in the last couple of years,” said Kelly. “I think it’s a byproduct of having tournaments to play this summer. I didn’t have a chance to play in a lot of tournaments last year with everything that was going on. I wasn’t traveling or playing in many Monday Qualifiers. I decided to take a different route and stay home to focus on my game and work with my coach and I even stayed home this winter to put in some work with him. I think the work is just starting to pay off now. I think my game is in a pretty good spot and I’m just going out and playing.”

Turner, who won the event in 1999 as an amateur, carded six birdies in his first round. Turner responded to an early-round bogey with a birdie on the par-4 fourth hole. He strung together a few pars before birdieing the par-5 ninth hole. Despite a bogey on the 10th hole, Turner went bogey-free over his last eight holes and birdied the 11th, 13th, 16th and 17th holes to close out his round. Turner has played in this event as a professional for the past several years but has since reapplied for his amateur status.

“It was a good day. I didn’t hit many loose shots and hit most of my yardages, said Turner. “I played a lot of placement golf today. I don’t hit the ball far enough to overpower the course. I have to put it out there to a yardage I like and play it in from there. I made a few putts and left a few out there as well, but for the most part, it was a solid round of golf. Hopefully, I can do it again tomorrow.”

Perkins opened his Illinois Open Championship bogey-free on his front nine and made three straight birdies on holes 16-18 to make the turn at 3-under par. Perkins held the solo lead for a few holes on his back nine. The first time he took the lead was on the par-5 first hole. He gave up the lead on the next hole but regained the lead on the par-5 third hole. Perkins extended his lead on the par-4 sixth hole but fell back to 4-under-par on the seventh hole before finishing his day with back-to-back pars.

“It was a good round today. This is my first time being out here, so I’m still getting used to it out there, but I putted well today,” said Perkins. “I left a couple of shots out there and had some three-putts, but outside of that, it was a pretty solid day. You can tell that Stonebridge has made some big changes. This is a Championship course and I really enjoyed playing it today.”
Chaussard got himself into the tie for second with a strong back-nine. Following a bogey-free front nine, Chaussard bogeyed the 11th, then played his final seven holes 4-under-par.

“I played well on the back nine today. I wasn’t that sharp early on, but I got lucky to make some pars on the longer par 4s,” said Chaussard. “I made some good up-and-downs to keep the round going and it was just a slow and steady round. I hit a good shot on 12 and that really locked me in. I made a 25-footer on 13 for birdie, then a nice 15-footer on 14 for birdie. I hit a good wedge shot on 16 and was able to make the putt. Then I had about 100 yards in on 18. The 18th hole is such a tough hole and even being inside 100 yards, the pin today wasn’t gettable. I played it to the left side of the pin and made a 20-footer for birdie. I just need to stay patient and keep it simple for tomorrow.”

Pavelonis parred his first six holes before making three birdies in a row to close out his front nine. Trailing the lead by three strokes, Pavelonis made birdie on the par-5 first hole to get to 4-under-par. After dropping a shot on the second hole, he got back to 4-under-par with a birdie on the third hole. Pavelonis found himself in solo second place after birdieing the par-4 third hole, but wouldn’t stay there long as he bogeyed the seventh hole to drop back to 4-under-par. He closed his round out with birdies on holes eight and nine.

Gannon started with six straight pars before bogeying the par-4 seventh hole. He eagled the par-5 ninth hole, becoming just the third player to make an eagle in round one, and turned at 1-under-par. A bogey-free back nine and three birdies got Gannon into the seven-way tie for second place.

Wax was also one of three players to make an eagle in round one. His eagle came on the par-5 14th hole and got Wax to 2-under-par. A birdie on the par-3 17th hole moved Wax into a tie for ninth. He dropped a shot on the par-5 first hole but got it back on the second hole. Wax made five straight pars on his back nine before he birdied the par-3 eighth hole to finish the day T2.

Mike Small (Champaign, Ill.), Derek Meinhart (a) (Mattoon, Ill.) and Aiden Lafferty (a) (Downers Grove, Ill.) are tied for ninth place following day one and round out the top-10. Small, who has won this event four times, looks to tie Gary Pinns as the winningest Illinois Open contestant with five victories.

Round two of the 72nd Illinois Open Championship will begin tomorrow at 7:30 a.m. off of the first and 10th tees. Following the completion of round two, the field will be cut to the low 50 scores plus ties.