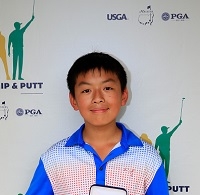 Thirteen-year-old Andrew Lim is on his way to compete on Sunday at Augusta National Golf Club live on the Golf Channel. Sounds impressive, right? It is.

Lim is one of 80 youth golfers from 30 U.S. states and one Canadian province who earned an invitation to Augusta National Golf Club to compete in the fifth annual Drive, Chip and Putt National Finals, to be conducted on Sunday, April 1, 2018, prior to the start of the Masters Tournament. The event will be broadcast live on the Golf Channel.

Developed in partnership between the Masters Tournament, the PGA of America and the USGA, Drive, Chip and Putt is a free, nationwide youth golf development initiative open to girls and boys ages 7-15. Participants compete in separate divisions in four age categories – focused on the three fundamental skills employed in golf, tapping the creative and competitive spirit of young golfers. The Illinois PGA conducted the 10 local qualifiers and two sub-regional qualifiers in the state, with Illinois PGA Professionals providing support at each facility hosting a qualifier.

“We are thrilled to once again have a local player qualify for the National Finals at Augusta from our PGA Section,” said Carrie Williams, executive director of the Illinois PGA Section. “Drive, Chip and Putt is such a wonderful program and competition for young players to test their skills and have fun.”

Lim, who plays out of Naperville Country Club, began his journey to the National Finals last June when he competed in the local Drive, Chip and Putt qualifier at Cantigny Golf in Wheaton, Ill. He placed 2nd in his age group, good enough to advance to the sub-regional at Cog Hill Golf & CC in Lemont in August. There, he came in 1st place and advanced to the regional qualifier in September at The Honors Course in Ooltewah, Tennessee where he finished first again and punched his ticket to Augusta.

“I’m really excited about competing in the Drive, Chip and Putt National Finals” said Andrew Lim. “I love playing golf and it’s a real privilege to have this opportunity at a special place like Augusta.”

Andrew started playing golf when he was nine years old and the family lived in Washington state. His Dad got him and his siblings started in the game because it was great way to spend quality time together, and offered many opportunities to teach life lessons. It was also an activity the kids could enjoy with their grandparents which they would do often. Andrew got hooked on the game and began playing competitive golf in Washington Junior Golf Association tournaments.

“Everyone at the club is very excited. We’ll all be watching and cheering for him,” said Brian Brown, Head PGA Professional at Naperville Country Club. “Andrew is always out there playing with his entire family – Mom, Dad and two siblings. They practice a lot during the summer and enjoy the game together which is really great to see.”