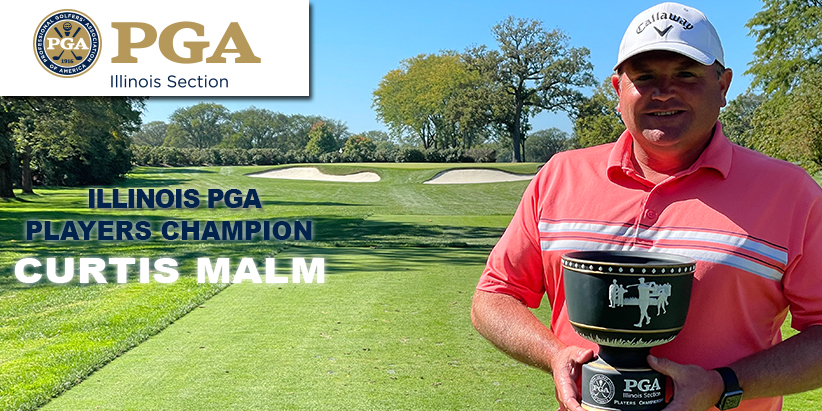 “Today kind of shaped up the same as last year,” said Malm. “I haven’t played much this year. I’ve only played in four events this year including this one. We were fortunate to be able to play such an amazing golf course here at Knollwood. I was lucky to sneak in to the event from my finish at the Section Championship and a few guys couldn’t make it, so when I got the call and Knollwood came up, there was no way I wasn’t going to make it up here to play and defend the title.”

Davis Jensen (Five Iron Golf) and Roy Biancalana (Blackberry Oaks Golf Club) were tied for first place entering the final round. Both players carded 4-under-par 68s in round one and were one-stroke clear of the rest of the field. Both players got off to rough starts in the final round. Jensen lost a ball on the first hole and made a double-bogey to drop two strokes and Biancalana bogeyed four of his first six holes to fall out of the lead.

With leaders off to a rocky start, the door was open for the rest of the field. Chris French (Aldeen Golf Club) entered the final round in second place after a 3-under-par 69 in round one. He quickly found himself in first place after four straight pars top begin his round. He bogeyed the fifth hole but got back into a share of the lead with a birdie on the sixth hole. French dropped back again with a bogey on the par-3 seventh hole and was unable to recover as he went on to card a 7-over-par 79 in the final round.

Jeff Kellen (Butler National), who started the day four shots off the lead, was in a share for the lead at 3-under-par thanks to a great stretch between holes two through 10 that he played at 4-under-par. A double-bogey on the par-4 11th hole dropped Kellen out of the lead and he finished the day tied for sixth place.

Early in the final round, the focus was on Jensen and Brian Carroll (The Hawk Country Club). Carroll started the final round three strokes off the lead following a 1-under-par 71 in round one. Birdies on holes six and nine got Carroll into a share for the lead with Davis at 3-under-par. He took sole possession of the lead with a birdie on the 10th hole, but Davis quickly answered with a birdie of his own, and the two remained tied at 4-under-par. Both players bogeyed the par-3 12th hole and remained tied for the lead as they stepped up to the drivable par-4 13th.

Carroll, who was in the group ahead of Jensen, made birdie on 13 to get back to 4-under-par. Jensen hit his tee shot to the right of the green and was unable to get up and down and made bogey to drop back to 3-under-par. Jensen would go on to make three more bogeys on the back nine and finish the tournament in fifth place.

Meanwhile, the 2020 defending champion was quietly climbing the leaderboard. Malm, who was the first alternate for this event until Shaun McElroy (North Shore Country Club) withdrew, carded a 1-over-par 73 in round one. He started the final round with a bogey-free front nine with one birdie to get to even par.

Trailing by four strokes, Malm kicked it into high gear on the back nine. He birdied the par-4 10th hole to get under-par for the first time in the tournament. He gave that shot back with a bogey on the 11th hole and trailed by four again. Malm hit a great tee shot on the 13th hole, driving the green and leaving him with a tap in eagle putt. With his game trending in the right direction, Malm made pars on holes 14-17 before hitting a spectacular approach shot on 18, making birdie on his 36th hole. Malm found himself at 3-under-par for the tournament and was the clubhouse leader.

“I hit it really well today,” said Malm. “I made the turn at 1-under-par, and I was playing great, I just couldn’t make any putts. These greens are so subtle that if you are just a little off nothing goes in. I throttled my tee shot on 10. The hole is about 600 yards and I had about 225 to the front. I hit a terrible 4-iron but got away with it and rolled up near the front to get to 2-under. Then I made two of the worst swings of the week on 11 and gave one back there. 13 was playing 302 today with a little wind off the right so I knew I could hit my big high cut that bounced up there about 18 inches for a two, so I made eagle there. I played well the rest of the way in; I just couldn’t get anything to fall until the last hole. I hit a wedge to about three feet and birdied 18. That was the two-shot swing right there.”

Carroll was teeing off on the 14th hole when Malm finished becoming the leader in the clubhouse at 3-under-par. He bogeyed the par-4 15th hole to drop back into a share for the lead with Malm. After a near missed birdie on 16, Carroll made an impressive up-and-down from behind the green on 17 to remain in a tie for the lead. Needing a birdie on the 18th hole to win the tournament, Carroll put his approach into the greenside bunker and just missed the par putt to force a playoff with Malm. He finished at 2-under-par for the tournament and took solo second place, allowing Malm to defend his title as the Illinois PGA Players Champion.

Andy Mickelson (Mistwood Golf Club) and Garrett Chaussard (Skokie Country Club) rounded out the top five at the Illinois PGA Players Championship with T3 finishes. Mickelson carded an even-par 72 in round one and needed a birdie on his 36th hole to force a playoff with Malm. He ended with a bogey and finished at 1-under-par 143. Chaussard recorded an even-par 72 in round one. He bogeyed two of the first three holes in the final round but got back to even par with an eagle on the par-5 sixth hole. Chaussard picked up one stroke on the way in to finish at 1-under-par 143.

“It was an odd year because I didn’t win anything, but I was close in a lot,” said Chaussard. “I finished second at the Section Championship, second at the Match Play, third here at the Players and I played well at the Illinois Open. So, I played well in all the Majors but it’s kind of weird I don’t feel like I played great at any point this year. It just kind of worked out that way.”

The Illinois PGA Players Championship had a little more on the line as Chaussard entered the week in second place in the points race, trailing French by 36 points.

“It was interesting going into this event, knowing where I stood, only 36 points behind Chris (French). I knew that I had to try and finish better than him and dodge a few other guys winning. I tried to put it out of my mind and just see what happened when it was all said and done. There was definitely a little extra on the line today, but I just tried to go out and play golf.”