Merchandising Your Pro Shop: Tips From The Pros 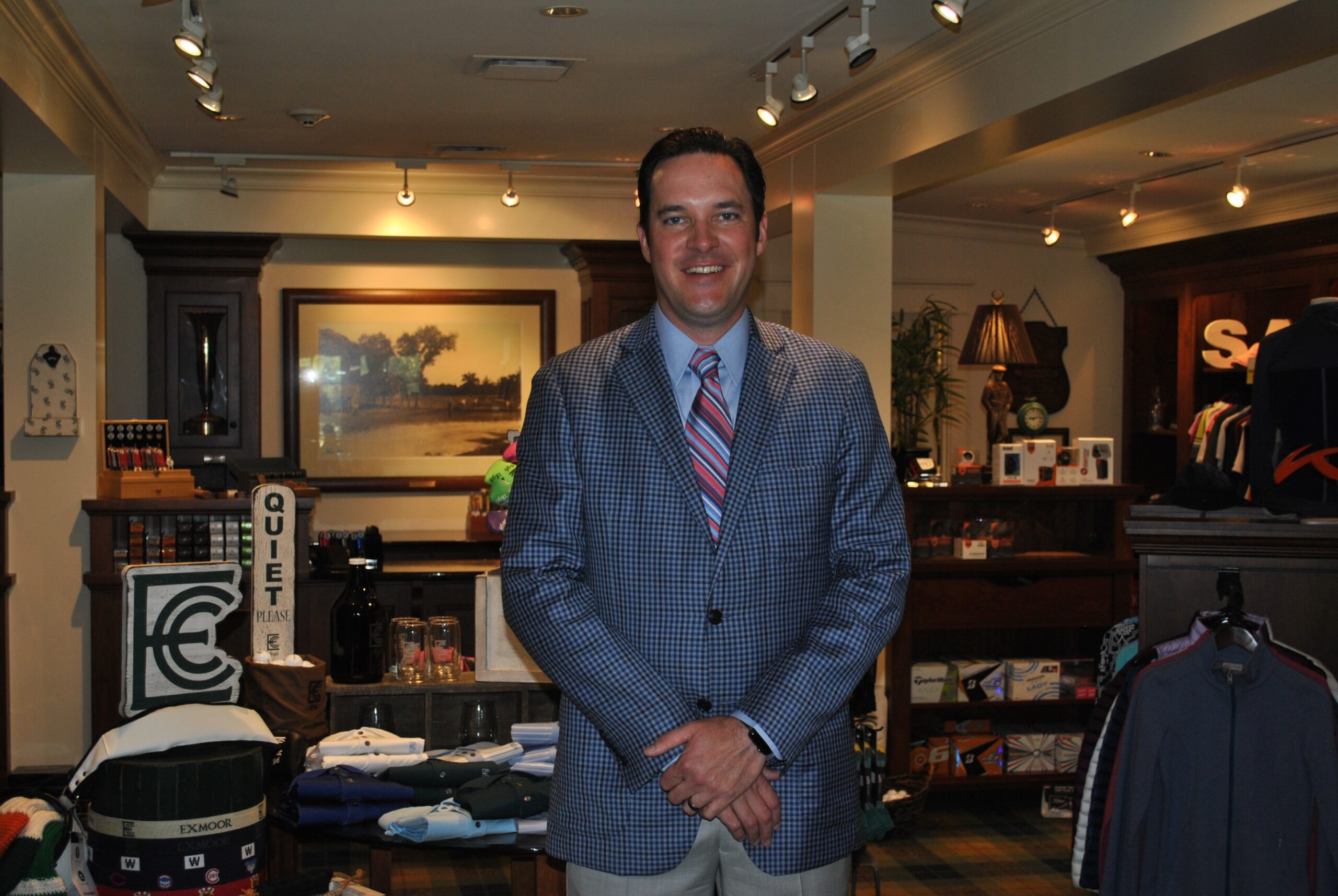 Why, you may ask, is there a beer tap sitting right next to the entrance of the pro shop at Exmoor Country Club in Highland Park? Is head professional Dave Schmaltz trying to double as a bartender?

Not quite. Instead, the beer tap is a way to get golfers to come into his shop.

Schmaltz steps out the front door, and points to the 18th green and then to the locker room. His pro shop is on the other end of the club’s grounds. From a logistic standpoint, it is unlikely that golfers will make the walk to venture back to his facility.

So Schmaltz borrowed an idea from his old Ferris State University classmate, Derek Brody, who faced a similar situation at Inverness Country Club. He installed a beer tap in the pro shop. Schmaltz then partnered with nearby Ravinia Brewery to sell a brand (named 1896 to celebrate the founding of Exmoor) that isn’t available in the clubhouse.

A mug costs $6, but if someone spends $30 on merchandise in the shop, it drops to only $1. To accentuate the theme, Schmaltz now titles his weekly email newsletter to members, “What’s on Tap?”

And here’s the kicker: All the revenue goes back to the club. Schmaltz isn’t interested in being in the liquor business.
“It’s all about getting traffic in the shop,” Schmaltz said. “Maybe they’ll come in before the round, or at the turn, or after 18. It’s a way of connecting more with our members.”

The beer tap is one of the reasons that led to Schmaltz being named the Illinois PGA Merchandiser of the Year for private clubs. Reagan Davis, the director of golf at Eagle Ridge Resort and Spa in Galena, was honored in the merchandiser category for resorts. Steve Gillie was cited among public courses for his pro shop at Randall Oaks Golf Club in West Dundee.

A common thread for all the winners is recognizing their customers’ trends and finding innovative ways to reach them.
“You have to know your demo,” said Davis, who oversees four pro shops at Eagle Ridge. “In our case, we have merchandise that caters to resort guests at one shop, and another that might appeal to people in the 35-45-year old range. You’ll see brighter colors and fancier shirts there. You try to get apparel that will appeal to everyone.”

“You have to put yourself in the eyes of the (consumers),” Gillie said. “I tell my assistants all the time, it’s not about stocking the shop with what you personally like. That’s how you get burned. There are items in the shop that I personally wouldn’t wear, but they appeal to other golfers. You have to take care of all the golfers who come into the shop.”

“What is the club all about?” Schmaltz said. “Are we going to be a bit edgy (in merchandise) or more traditional? You have to figure out what the members want.”

With a more affluent clientele at Exmoor, Schmaltz knows his members love the quality of the high-end Peter Millar apparel.
“We do a ton of Peter Millar,” Schmaltz said. “Their brand is huge and growing. People come in here all the time, asking ‘Where is the new Peter Millar stuff?’”

Gillie, meanwhile, has to find products to sell to a much larger cross-section of golfers as a public course golf shop. He stocks his store with a broad range of apparel to appeal to everyone.

“You never know who is going to walk through the door,” Gillie said.

Davis says he has success with TaylorMade/adidas thanks to Eagle Ridge being on its preferred vendor list. That helps with competitive pricing.

One area where Davis has done particularly well is selling apparel to women. Early on, he said he recognized the buying power of female customers far exceeds that of their male counterparts. He also says it is essential to have a wide variety to tap into that demographic.

“We sell shirts to men; we sell outfits to women,” Davis said. “They tend to buy more than one piece. If you’re not catering to women, you’re really missing out.”

At Exmoor, Schmaltz has a Kid’s Corner. “That hits home with our grandparents,” he said.

Exmoor also has accessories and other smaller items. Schmaltz said he wants his members to have “a full shop experience.”
That includes selling golf equipment. Davis knows many golf shops have opted out of selling clubs for various reasons. Davis, though, contends golfers come into a pro shop expecting to see drivers, irons, wedges, and putters.

Equipment isn’t a big part of his business, but he says, “It makes our shop look complete.”

Another consistent theme is the concept of what Schmaltz refers to as “keeping the shop fresh.” This involves rotating merchandise to different locations and setting up displays. It could even mean folding or hanging items in a different manner.

“A lot of times, someone will say to us, ‘Oh, is this new?’” Schmaltz said. “They might think it is new even though it has been here for months. We just moved it from one place to another.”

Davis says he “challenges” his staff to make Eagle Ridge pro shops look different on a weekly basis. The idea is to stimulate customers who adjust quickly to seeing the same old thing. Davis also likes to put out as much merchandise as possible.

“You can’t sell from an empty wheel barrel,” Davis said.

Gillie faces a different situation at Randall Oaks. His shop only is 700 square feet, and the original design featured floor to ceiling windows. While the outdoor views are nice, it does limit Gillie in how he can display merchandise on walls and in corners.

“We take what we have and try to be creative with it,” said Gillie, who uses crates and waterfall displays.

Gillie says he places a premium on marketing. He has signs through the facility promoting sales at the shop. He also reaches out to clientele with targeted emails. A prominent sign at the entrance of the course helps bring in customers.

Gillie also has special promotions tailored around specific events. For instance, during the Masters, he will promote that he has the same new apparel the top players are wearing at Augusta National.

“We really try to push the envelope on the marketing side,” Gillie said. “You have to be proactive these days.”

All the professionals already are planning ahead for 2018. While Schmaltz will rely heavily on his mainstays such as Peter Millar, he always is on the lookout for a couple new brands to add to the shop’s variety.

Davis teams with Vicki Main at Eagle Ridge, calling her “a great merchandiser.” He has a simple, but effective approach in stocking his golf shops.

“Buy enough, buy the right product, and buy the best you can get anywhere,” Davis said.