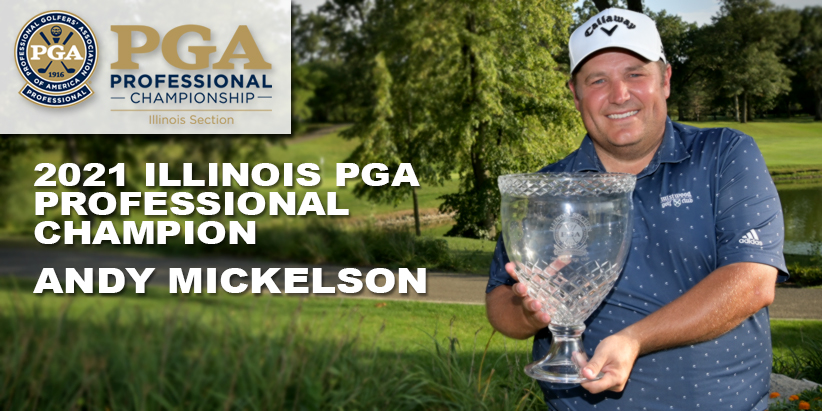 “Coming in today I felt like it was going to be more of an Illinois Open setup,” said Mickelson. “I truly did take it one shot at a time during the entire tournament. It’s been five years since I’ve won a big tournament and done something special.”

Mickelson, who started the day in second place and two back of Garrett Chaussard (Skokie Country Club), quickly jumped into the lead. He made par on holes one and two and found himself in first place after a shaky start from Chaussard and Tim Streng (Wildcat Golf Academy). He extended his lead with his first birdie of the day on the par-5 third hole. Mickelson hit his third shot into the green close on three and made his short birdie putt to get to 3-under-par for the tournament.

Mickelson continued his solid play on the fifth and sixth holes. He had birdie opportunities on both holes with chances to extend his lead but was unable to capitalize. He remained in the lead despite hitting his second shot into the water on the seventh hole. Mickelson missed the green to the left and his ball found the water from about 180 yards. He was able to get up and down for bogey and only dropped one shot to remain in the lead by three strokes.

After making par on the par-5 ninth hole, Mickelson turned with a four-shot lead. His great ball striking continued on the back nine as he hit every green. A birdie on the 10th hole got Mickelson back to 3-under-par and extended his lead to five strokes. The round could’ve been much lower for Mickelson as he had near misses on 13, 14, 15 and 16 for birdie. Nonetheless, Mickelson’s steady week carried on and he had a six-stroke lead after the 13th hole.

“The last two days were as good as I’ve played in a long time from tee to green,” said Mickelson. “I really had control of the golf ball and that’s the most important thing to me. When I have full control of my golf ball and know what it’s doing, left to right, high to low, I can compete with anybody.”

Mickelson made a two-putt par on the 17th hole and stood on the 18th tee with a four-stroke lead. After intentionally hitting the ball left, Mickelson hit a solid punch shot from the left rough to the front of the green. He made a two-putt par to close out his round at 1-under-par 71 and secure his first career Illinois PGA Professional Championship.

Chaussard, who started the day in first place, started his final round with a double bogey on one and a bogey on two to fall back to even par and out of the lead. He made two more bogeys on the front nine to turn at 2-over-par for the Championship and found himself in fourth place. He battled back on the back side. After making bogey on the 10th hole, Chaussard made back-to-back birdies on 14 and 15 to get back to 1-over-par for the tournament and solo second place. He closed out his round with two pars and finished the tournament tied for second at 1-over-par 217, qualifying for the National PGA Professional Championship.
“I’m disappointed in today but I got off to a rough start,” said Chaussard. “I finally got a little feel for it towards the second half of the round so at least I played a decent back nine to make it more respectable. I am looking forward to the National Club Pro Championship at Barton Creek.”

Kurt Rogers (Champaign Country Club) also finished T2 after a final round 1-under-par 71. Rogers, who held the lead for a moment in round one of the Championship, started the final round in sixth place. He made one bogey and one birdie on the front nine and made the turn tied for fourth place. After a bogey on the 13th hole, Rogers strung together two birdies on 15 and 17 to join Chaussard in second place. A par on the 18th hole punched Rogers’ ticket to the National PGA Professional Championship for the first time in his career.

“It went well today. I just tried to stay patient and keep the ball in play,” said Rogers. “I knew the pins were going to be tough so I really can’t go firing at them from where I came in from except for a few holes. I never really thought about getting to go to the National Club Pro Championship. I did qualify for the Senior National Club Pro Championship at Bryn Mawr recently. But Brad Slocum (Illinois PGA Director of Operations) told me I’d have a shot here because I can drive it pretty straight and keep it in play. This is really cool for me. It’s probably my last go. I’m 60 years old, so it’s pretty neat for me to get to go to the national championship.”

Carroll, Paeglow and Streng all tied for seventh place with 7-over-par 223s. Bartelt won the playoff to secure the final qualifier spot for the Illinois PGA. He finished his tournament at 8-over-par 224.