Moore, Johns, Mickelson Tied for the Lead After Round One of the Illinois PGA Professional Championship 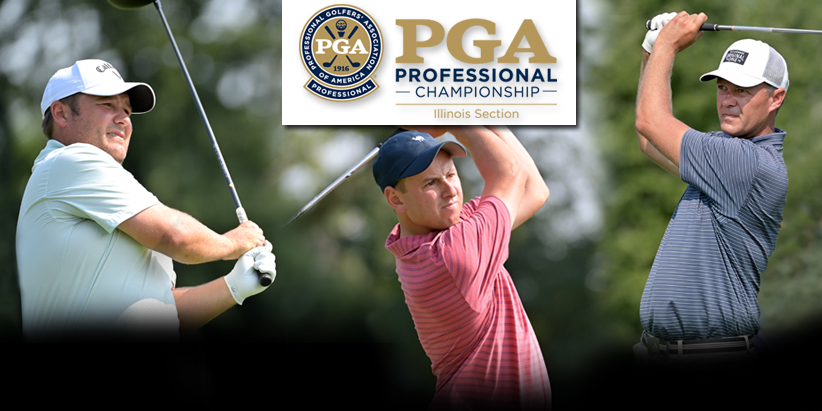 Moore started the tournament with a birdie on the 10th hole. He found himself in a greenside bunker and chipped in from there for birdie. The good fortune continued for Moore who holed out from 142-yards on the par-4 14th for an eagle and moved to 3-under-par. A birdie on 16 and another chip-in on 18 for birdie moved Moore to 5-under-par 30 on his front nine. Moore’s back nine featured seven straight pars before making his first bogey of the day on the par-4 eighth hole. He finished the round with another birdie on the par-5 ninth hole to finish his day at 5-under-par 66.

“The course played great. The greens were perfect. Going out first definitely helps,” said Moore, one of Medinah Country Club’s Head PGA Professionals.  “I was able to go out and hit some great shots and didn’t have to use the putter a whole lot on the back nine with a few chip ins and hole outs.”

Johns started his tournament on the back nine as well. He began the day with three straight pars before making back-to-back birdies on holes 13 and 14. Johns took advantage of the par-5 17th hole to card his third birdie of the day and make the turn at 3-under-par 32. Johns continued his bogey-free round on his back nine with five straight pars before picking up his fourth birdie of the day on the par-4 sixth hole. He closed his round out with a birdie on the par-5 ninth hole to shoot 5-under-par 66.

“I think I got what I wanted today,” said Johns, the 2019 Illinois PGA Professional Champion. “It feels great to get off to a good start. I’m where I need to be, and I would say that the entire round went pretty well. I putted okay, hit a couple of loose shots, hit a couple of good shots and it was all fine.”

Moore and Johns are just two of the record setting 10 Medinah Professionals playing in this year’s Section Championship. And although they are all competing for the same prize, there seems to be some friendly competition among the host facility staff.

“There’s definitely a little fun competition going on between the staff,” said Moore. “I think the goal for everyone going into the week was to try and finish better than the rest of the staff, but I think that will be adjusted for me after a good opening round.”

“Brandon playing well today might be the greatest thing ever,” said Johns. “The kid never gets to play golf, what he did today is pretty impressive. If I can’t win this tournament, I hope he or one of the other Medinah pros can.”

Mickelson carded a bogey-free round with five birdies in round one. He started his round on the back nine and made birdies on holes 12, 14 and 17 to make the turn at 3-under-par 32. Mickelson kept his card clean on his back nine and birdied the par-5 first hole and the par-3 seventh hole to finish the day at 5-under-par 66.

“I drove it well today, which is typically my weakness, but I drove it well out there and just kept hitting some decent shots and scored what I should’ve,” said Mickelson. “I feel like I play really well when the lights go on. I tend to play well in the high-pressure situations. Every single year the goal is to try and get into the National Championship and then hopefully play well enough to play in the PGA Championship.”

Frank Hohenadel (Mistwood Golf Club) currently sits in solo fourth place after carding a 4-under-par 67 in the first round and trails the leaders by one-stroke. Hohenadel, who won this event at Medinah Course One in 2011, recorded his first birdie on the par-4 12th hole. He gave the stroke back on the next hole, but birdied the par-4 13th hole to get to 1-under-par. His birdie on the 15th hole was offset by a bogey on the 16th and he remained at 1-under heading into the last two holes of his front nine. Hohenadel made back-to-back birdies on 17 and 18 to make the turn at 3-under-par 32.

2019 runner-up Garrett Chaussard (Skokie Country Club) is in solo fifth place following an opening round 3-under-par 68. Chaussard’s round featured four birdies, two on each side, and a bogey on the par-3 18th hole. Chaussard will look to capture his first ever Section Championship in the final two rounds.

The second round of the 98th Illinois PGA Professional Championship will begin tomorrow at 7:20 a.m. The field will be cut to the low 60 and ties following tomorrow’s round.