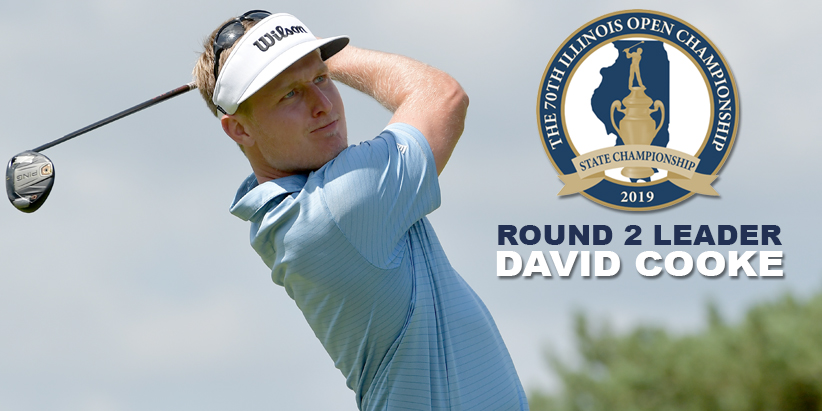 Glenview, Ill. – August 6, 2019 – 2015 Illinois Open Champion, David Cooke, leads the 70th Illinois Open by three strokes heading into the final round. Cooke carded a 3-under-par 69 at the Glen Club in round two and now sits at 8-under-par 136 for the tournament.

“Today was a little slower than yesterday for me,” said Cooke. “But having won before will make tomorrow a little easier. I’ve been in contention the last four of five times at this event.”

After an impressive 5-under-par 67 at Ridgemoor Country Club on Monday, Cooke opened with an even-par 36 on the front nine at The Glen Club. Cooke made the turn jockeying back-and-forth with three other players for the outright lead.

Following five pars in-a-row to start the back nine, Cooke birdied three of his last four holes to regain the sole lead of the 70th Illinois Open.

“I can’t try and do too much tomorrow,” said Cooke. “I just need to play my game, wait for my chances, not get ahead of myself and hit as many greens as possible. If I do that it should all fall into place.”

Two players are just two-strokes back from Cooke. Tee-K Kelly and amateur David Perkins are both T2 with tournament totals of 5-under-par 139.

“I played solid today. I did everything pretty well,” said Kelly. “I’m super comfortable with the golf course, it’s amazing. The course is firm, the greens are great and the weather has been perfect. It should be fun tomorrow.”

Kelly moved up one spot from T3 to T2. The Wheaton native’s round featured six birdies, three aside, for a 2-under-par 70 at the Glen Club. Kelly and Cooke, who share the same agent and swing coach, will be joined by Perkins in the final group on Wednesday.

“Me and David know each other really well,” said Kelly. “We go way back. It will be a lot of fun.”

Following a 2-over-par 74 at Ridgemoor Country Club in round one, Perkins responded with the low round of the day to get himself back in contention.

Perkins jumpstarted his round with an eagle on the par-5 first hole and birdied two of his next three. He added his third birdie of the round on the par-4 eighth hole to make the turn at 4-under-par. A bogey-free back nine with three birdies solidified Perkins’ strong round to finish the day at 7-under-par 65.

“This is awesome,” said Hohenadel. “I never really contend at the Illinois Open. I think I play a little too safe out here and hit a lot of three-woods off the tee, but I did that again today and got away with it.”

There are five players tied for fifth place entering the final round. Just five strokes back, this group includes the likes of Tommy Kuhl and Nick Hardy.

The final round of the 70th Illinois Open will be played at The Glen Club Wednesday, August 7. Tee times will begin at 8:00 a.m. off the first hole.