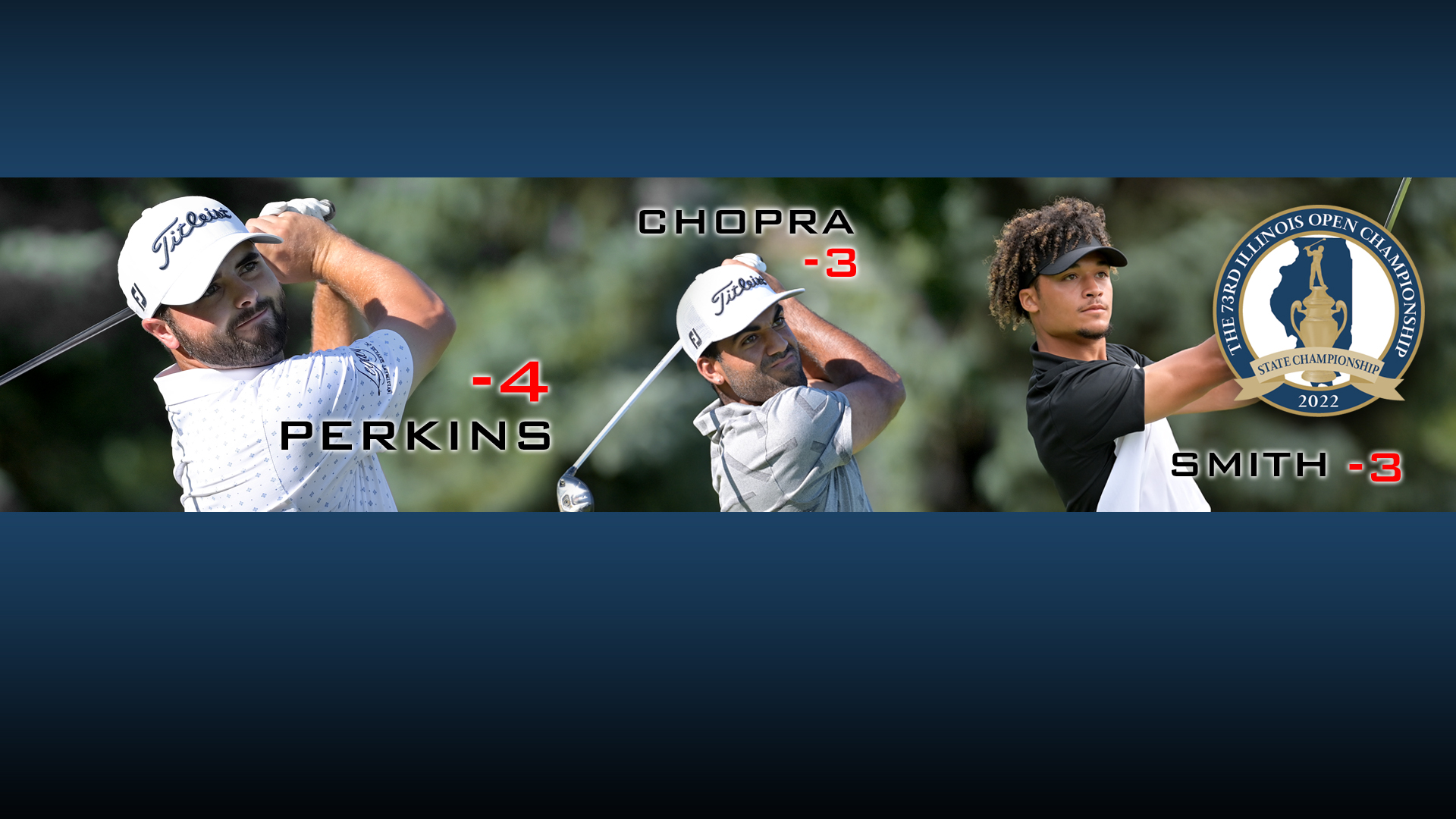 Perkins started the day two shots off the lead after a 1-under-par 71 in round one. Perkins was on the attack early carding birdies on two and three to join Monday’s co-leaders at 3-under-par. Taking full advantage of the par 5s, Perkins made birdie on the par-5 sixth hole to take sole possession of first place at 4-under-par. He finished the front nine bogey-free for a 3-under-par 33 and held a one-shot lead.

Like many others in the field, Perkins found himself battling to make par in the middle part of his round. He bogeyed the par-4 11th hole after a three-putt to drop into a two-way tie for first with Smith. He then bogeyed the 13th hole to fall out of the lead altogether.

He would get back on track by taking care of the backside pars 5s. Perkins hit his second shot into the par-5 14th hole short of the green on the left-hand side. With the pin all the way across the green on the front right of the surface, he hit a nice little chip shot to get up and down for birdie and rejoined the tie for the lead. He then hit the par-5 17th green in two leaving himself about 30 feet for eagle, a nice lag putt left Perkins with a tap-in birdie to reclaim the lead. The job wasn’t done though, a tough tee shot was waiting for him on the 18th hole, but Perkins played the hole to perfection, hitting the center of the fairway and landing the ball on the back of the green with his approach. Another nice two-putt left Perkins in the lead by one stroke at 4-under-par heading into the final round.

“I got off to a really good start,” said Perkins. “I hit the ball solidly for the first 11 holes or so and that helped me. I hit a lot of greens so that was nice. I have no experience playing what they call PGA TOUR-level championship golf but it’s firm out there. When I think of championship golf it’s firm, fast, and windy and you have all those attributes out here at White Eagle. It’s playing tough, it’s fair and it’s really a tough mental test.”

Chopra began the day in the pack of players at even par and three strokes behind the leaders. A 1-under-par 35 on the front nine left Chopra two shots back entering his final nine holes of round two. While Perkins was going through his rough patch, Chopra shrunk the gap with a birdie on the par-4 14th hole. Chopra had left himself short-sided with his approach shot but hit a great chip shot to get up and down and draw within one stroke of Perkins. He then made an impressive birdie on the 15th hole to get into a tie for the lead at 3-under-par. With Perkins making bogey on 13, Chopra was tied with Smith atop the leaderboard.

On 17, Chopra seized his opportunity to take the lead. He hit his second shot just short of the green, leaving him an uphill putt to the front-right hole location. An impressive lag putt left Chopra with a tap-in birdie and he took sole possession of the lead. However, he fell victim to the tough tee shot on 18 as he hit his drive into the water on the left. Chopra was able to make bogey from his drop and finished the day at 3-under-par 69 for a tournament total of 3-under-par 141. He is currently tied for second with Smith.

“I had a good stretch there on the back nine,” said Chopra. “I bogeyed 11 and that got me fired up, so it was nice to make a few birdies coming in and then 18 happened but that was just one shot, so we move on for tomorrow. I think I have a pretty good chance tomorrow. I haven’t played great yet and let a lot of shots slip out there yesterday and today. I think if I can take care of those, I can score a lot better.”

Smith started the day in a share for the lead after a 2-under-par 70 in round one. His second round was on par with his approach as he tried to be patient throughout the day. He parred his first four holes before getting out to the lead with a birdie on the par-5 14th hole. He would give that shot right back with a bogey on the 15th hole and finish his front nine (the back nine) at even par and in a share for the lead with Monday’s co-leaders.

Another consistent start on his back nine left Smith with four straight pars. Back-to-back birdies on holes five and six got Smith to 4-under-par and gave him sole possession of the lead. He was unable to hang on to that lead and he dropped back to 3-under-par for the tournament with a bogey on the seventh hole. He finished the day with a 1-under-par 71 after making an impressive par from the fairway bunker on the ninth hole. He was the clubhouse leader until Chopra and Perkins finished later in the afternoon, leaving him in a tie for second after 36-holes.

“I’ve been trying to stay positive the whole way around and stay calm no matter what situation I’m in,” said Smith. “When I was in the bunker on nine, the sand was pretty hard and firm, I just wanted to hit the center of the green because I knew I could two-putt. So, I just hit it to the center of the green, made my par, and got out of there.”

Luke Gannon (Mahomet, Ill.) and Anthony Albano Jr. (Park Ridge, Ill.) are tied for fourth place after 36-holes. Both players carded the low round of the day with 4-under-par 68s. Gannon, who had a share of the lead early on in round one, birdied his first two holes of round two to get back to even par for the tournament. He got himself back under par with a birdie on the par-5 sixth hole. It looked like things might get away from Gannon who made double bogey on the par-3 eighth hole, however, he battled back on his final nine holes carding a bogey-free back nine with three birdies including two in a row on holes 14 and 15 to get himself back in contention. He is currently 2-under-par for the tournament.

“I played a lot better today than yesterday,” said Gannon.  “I made one double on 8, but other than that, I putted much better than yesterday – I had better speed on the greens – and that put me in a good position for tomorrow.”

Albano Jr. carded a 2-over-par 74 in round one. He began his second-round birdieing three of his first five holes but finished his front nine with back-to-back bogeys. A bogey-free back nine (the course’s front nine) got Albano Jr. back into contention. He is also 2-under-par for the tournament. He and Gannon will be paired together on Wednesday, marking the second year in a row the two of them will play the final round together.

Biancalana held a two-stroke lead at one point in the round. He made three birdies in a row on holes 10, 11, and 12 including a nice chip in from the front of the green on the 11th hole. He would go on to bogey four straight holes after hole 12 to fall back to 1-under-par. Grieve also had a share of the lead this afternoon but he bogeyed two of his last three holes to fall back to 1-under-par. Less joined Gannon and Albano Jr. with the low round of the day of 4-under-par 68 to get himself back in the mix.

Five players are tied for 11th place at even-par entering the final round. Among this group is round one leader Drew Shepherd (Chicago, Ill.), who carded a 2-over-par 74 in his second round. 2020 Illinois Open Champion, Bryce Emory (Aurora, Ill.) is also in this group. He was the fourth player to record the low round of the day of 4-under-par 68. Michael Schachner (Chicago, Ill.) is another player in this group. He held sole possession of the lead this afternoon before hitting two balls into the water on 18 and making a triple-bogey.