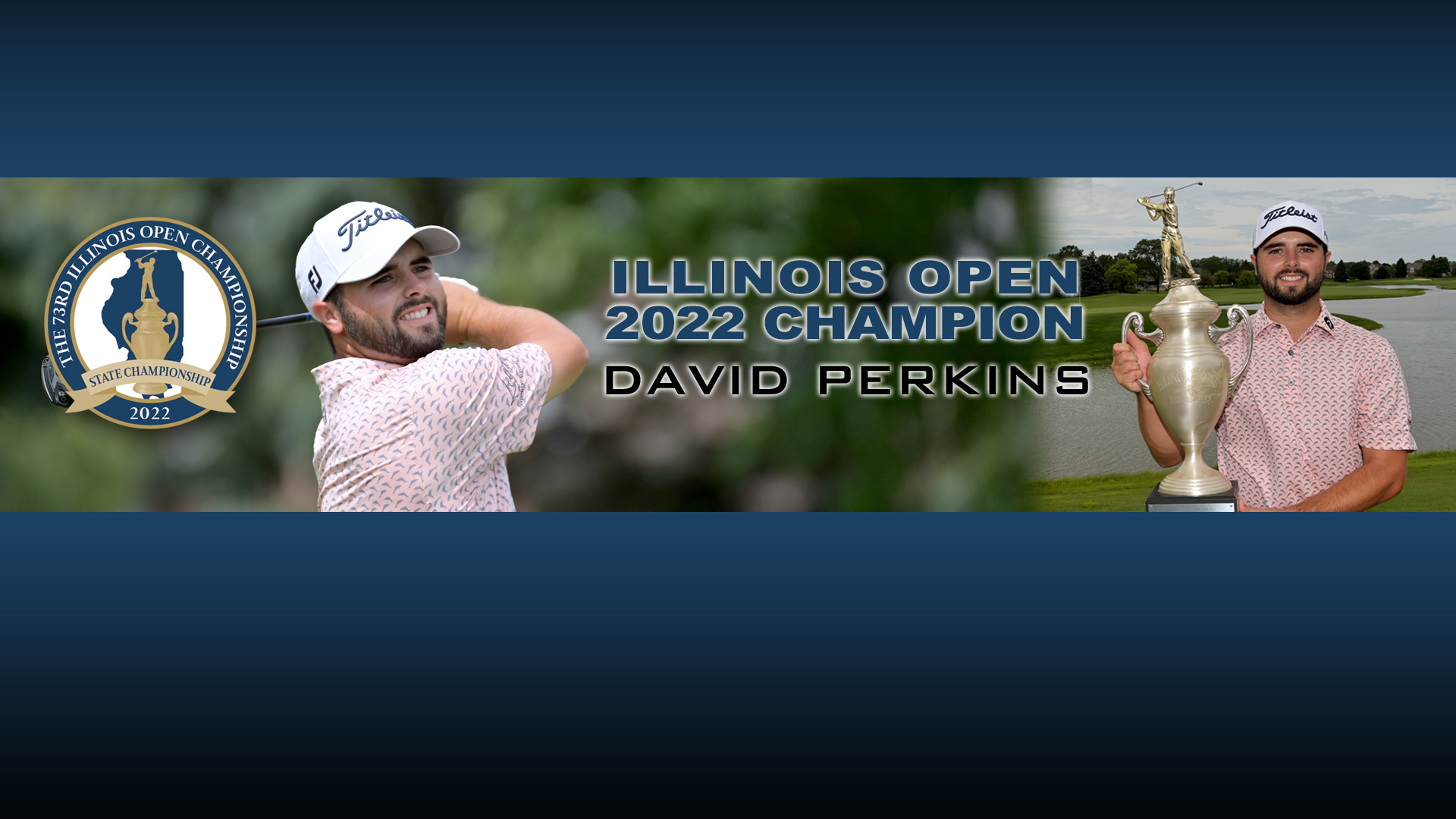 “It hasn’t really set in quite yet so I can’t remember a lot of shots which is rare for me,” said Perkins. “The mental aspect was the most key. The course was set super tough and played hard every day. I was just keeping myself in it knowing that if I kept missing in the right spots and hitting golf shots that I could come out on top at the end.”

Marcus Smith (a) (Rockford, Ill) finished tied for third place. He carded a final round of 1-under-par 71 for a tournament total of 4-under-par 212 to win the Low Amateur Award in his first career Illinois Open Championship appearance.

“I couldn’t be happier with the way I’ve played,” said Smith. “Granted it was a tough loss because I was right there but at the end of the day, I played three rounds under par. And I’m very excited because this is my sixth straight round of golf under par.”

Varun Chopra finished in solo second place after a final round of 2-under-par 70 for a tournament total of 5-under-par 211. Chopra’s finish marks the best Illinois Open finish in his career.

Perkins began his round with a one-stroke lead over Chopra and Smith. He got started with a birdie on the par-5 second hole. He was the only player in his group to reach the green in two. He hit a nice lag putt to leave himself a tap-in and held his one-stroke lead. After leaving his approach short on three, Perkins hit a nice chip shot but was unable to make par and fell back to 4-under-par. At the time, he was in a two-way tie with Chopra.

The par-4 fourth hole was moved up today to play 300 yards. All three players in the final group left themselves with short chip shots for their second shot. Perkins hit his chip to about three feet and made his birdie putt to get back to 5-under-par. Chopra mishit his chip shot and left himself about 15 feet for birdie. He buried the putt and moved into a share of the lead at 5-under-par.

A good sand save on five kept Perkins at 5-under-par as he stepped to the par-5 sixth hole. The sixth hole was also moved up today, playing at 535 yards. Perkins hit his second shot to the left of the green. He hit a delicate chip shot above the hole and rolled in the putt to get to 6-under-par and take a two-stroke lead.

Perkins would go onto the par the last three holes of the front nine, however, Smith kept the pressure on him. After a double bogey on the par-3 fifth hole, Smith battled back with back-to-back birdies on holes seven and eight to get back in the mix. He made the turn at 4-under-par.

Perkins found himself fighting a large group of players at 4-under-par as he turned to the back nine. His playing partners kept him honest as Chopra sat at 4-under-par for most of the back nine, and Smith moved to 5-under-par with a birdie on the 13th hole. Perkins dropped a shot on 13 to fall into a tie with Smith at 5-under-par.

All three players in the final group hit great shots into the par-4 15th hole. Perkins left his birdie bid just short to remain at 5-under-par. Chopra and Smith also left their putts just short keeping the leaderboard as is.

The players then stepped up the par-3 16th hole, which played as one of the tougher holes all week. Smith hit his tee shot into the water on the right leaving the door open for Perkins. Perkins made a good decision, playing to the center of the green and two-putted to make par and take the lead at 5-under-par. Chopra missed the green to the right and left himself short-sided. Unable to get up and down, Chopra fell to 3-under-par.

As the players hit their shots into the 17th green, a storm came in forcing play to be delayed for an hour.

Following the delay, Perkins hit the shot of the day on the par-5 17th. He left his second shot in the left rough. He had some green to work with but had a tough lie. He hit a great wedge shot to about four feet and all but wrapped up the Championship. A two-putt par on the 18th green sealed the deal for Perkins’ first career professional win.

“The chip shot and 17 was a big one,” said Perkins. “I was short-sided, the rain delay could’ve helped me out, that might have been a blessing. It was an awkward lie growing into me. I was just aggressive, and I knew if I left it short I was going to make this tournament really close and if I didn’t I was going to make par at worse. So that shot was huge.”

After a disappointing bogey on 16, Chopra was able to reach the par-5 17th in two and make birdie to get back to 4-under-par. He hit a fantastic approach shot into the island green on 18 to make birdie on his 72nd hole and take solo second place.

After making double bogey on the 16th, Smith made an impressive up and down on 17 for birdie to put himself back in front for the Low Amateur title. He hit his approach just over the flag on 18 and was able to two-putt for par to secure the amateur title.

“On the car ride here today I was doing everything I could to convince myself I was going to play well today,” said Hudson. “I couldn’t tell myself enough I’m going to putt it great and have a great day. I hit a wedge shot on the first hole to four feet and thought ‘Ok here we go, this is going to be a great day’. I hit it pretty well today. I played the par 5’s well and obviously made a couple of putts, but I had a lot of close looks. I had one key par save on the par 3 fifth hole which was a 9-footer for par. Every other birdie putt was inside 12 feet.”

Roy Biancalana (St. Charles, Ill.) finished T7 and was the low Illinois PGA Professional. Biancalana made a run at the lead early in his round. He carded a bogey-free front nine with birdies on two and four. He found himself T3 at 3-under-par as he made the turn. Biancalana got to 4-under-par and one shot off the lead with a birdie on 10 but was unable to get any closer as he closed out his tournament with two back-nine bogeys. The final round of 1-under-par 71 gave Biancalana a 2-under-par 214 for the Championship.