PHIL BENSON AND BOB KOSCHMANN TO BE HONORED AS SENIOR MASTERS 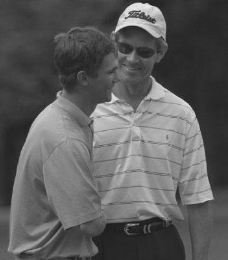 When they say golf is a lifetime sport, they are, of course, referring to Phil Benson. Giving him his first lesson at the age of three, Benson's father wasted no time getting a golf club into his son's hands. Five years later, Benson's father passed away, but the introduction to golf he had provided his son lit the fire for a love of the game that still burns strong today.

The game he picked up as a toddler is still Benson's main passion, more than a half a century later. As the Head Golf Professional at Itasca Country Club in Itasca, Ill., Benson says that though his club responsibilities are almost exactly the same as they were when he started there almost 40 years ago, he still loves what he does.

These interesting stories are just part of the reason why work is so fun for Benson.

"I don't ever feel like I'm going to work when I go to work, so I guess that's why I stayed in the field and stayed here. It's always enjoyable to come to work."

After graduating high school in 1975, Benson enrolled in the PGA of America's new Professional Golf Management (PGM) program at Ferris State University in Big Rapids, Mich. He was a member of the first graduating class of that program, and began his career at Itasca in 1979.

With a hardworking and quality staff by his side, Benson says his company at the club has been incomparable.

"I have been fortunate enough to have a lot of good assistants over the years," he boasts of his Itasca staff. "After 37 years I've had quite a few [assistants] and they've all, for the most part, been great guys."

One of the life lessons he shares with his assistants is one he's learned through his lifelong career in service to a membership at one club – the immense importance of patience.

"Control your temper. Golf is a game that doesn't allow you to get too high or too low—if you do, you generally don't play it too well." The same approach helps him stay calm at work and at home too. "You've got to control your insides, which helps in pretty much every other line of what we do as far as the business goes…I have to always be the guy that is even keel." A successful tournament competitor early on in his professional career, Benson has had to set aside his playing priorities.

"I used to play in every event, I played in all the events up through about 10 years ago then I just got too busy here and couldn't play much."

But for aspiring professional golfers that couldn't imagine a day without a solid competitive 18 holes, Phil does have some advice.

"If you want to play [professional] golf, you have to pick a direction to go play: find a sponsor, find someone who's going to back you, work your butt off, play, give yourself the best chance you can. If it works it works, if it doesn't it doesn't."

A family man at heart, Benson doesn't think twice about the path he's chosen for his career in the industry. Benson balances his time at Itasca with other hobbies.

"I love to fish; I used to love to hunt but in Chicago that's almost impossible. And I used to play a lot of basketball myself so I still enjoy playing basketball."

"The rest of my hobbies wrap around my family. I like to do things with my family—with my grandkids—so they get a lot of my time and attention when I'm not at work."

Since becoming a member of the Illinois PGA, Benson has learned from many fellow professionals, but one mentor stands out to him when he considers his lifetime experience with the game he loves.

"When I first came to the section Hal Miller was instrumental in making me feel comfortable," he acknowledges.

"That really worked out in my advantage. He always was a class guy and having that kind of guy act like your friend and be a friend to you was important to me then and still is. He has always been a good guy."

Plain and simple, Phil Benson's love for the game began the day he first picked up a club at age 3. The way he describes the impact of the game on his life is just as simply put — Benson says because of his passion for the game, he's never worked a day in his life.

Phil Benson
Growing up in Indianapolis, Ind. was integral to the development of Robert Koschmann's lifetime career in golf. Bob was only six years old when his father gave him his first set of clubs and, just because he wasn't a member of his neighborhood country club didn't mean that he wasn't out there practicing.

"I used to sneak in there and eventually started caddying there," he admitted. Soon enough he was playing and improving his game all over town. "Indianapolis, where I grew up, had an incredible golf program. When I first started playing in the juniors, for $20, you could play golf all day long on seven municipal golf courses," says Bob. And Monday through Friday, that is exactly what he did.

This type of open access to the golf courses of Indianapolis led to Koschmann playing high school golf, where he was a member of a state championship golf team. He went on to play on the Ball State University's Men's Golf team in the early 1970's. "We played in three NCAA Championships and finished in the top 15 twice," he recalls. Though he admits his team couldn't keep up with teams like Florida, Texas and Wake Forest, Bob never doubted his individual desire to continue his career in golf. "Ever since I was ten or twelve years old I wanted to be in the golf business. Of course all junior players think they're going to be playing on the tour when they're ten or twelve years old but, once reality set in, I decided to go the club pro route."

By the end of 2016, Koschmann, a PGA Master Professional, will have been the Head Golf Professional at the Lake Shore Country Club in Glenview, Ill. for 40 years.

While caddying for tour player Jim Jameson, Koschmann was informed by a friend of Jameson's about an assistant golf professional position at Lake Shore. When he called to inquire about the position, he was hired on the spot over the phone.

Koschmann didn't know much about the club or the city but he took the job and headed north for Chicago, and once there, wasted no time in making some prime connections in the Illinois golf scene.

"My very first tournament up here in Chicago was a blind draw— it was a Junior-Senior event and I was paired with Bill Ogden. He was sort of the 'dean' of Chicago golf pros and it was sort of known that if you worked for him you were going to get a good job," Bob explains.

After two years as an assistant at Lake Shore, Koschmann got a call from Ogden.

"Bill called me on the phone and he wanted to know if I was interested in coming over to North Shore."

"Then, the head professional job at Lake Shore opened up in the fall of 1978 and I got the job."

With almost forty years under his belt, Koschmann confidently attributes some of his most formative experiences to the community and staff of the Lake Shore Country Club. "They have treated me great here, and they've almost — I'm not saying I feel like a member – but almost." And Bob is not the only Koschmann to have greatly benefitted from his life at Lake Shore.

"They were great to my kids; they let them play out here—I mean it greatly affected their lives. My daughter won the state high school championship; she went to [the University of] Illinois on a full golf scholarship, won several tournaments at Illinois. My son caddied out here, worked for me in the golf shop; he won the Chicago District Amateur Championship and won numerous other tournaments," Koschmann lists proudly.

Koschmann's son also played college golf, and like his dad has chosen a career in golf, working as a salesman for Ping.

Being able to pass on the game to his kids, for Koschmann, was the best perk of working at Lake Shore. Now that he is reaching the end of his career, he says that he is beginning to think about his next steps.

"Golf has been my entire life; it is where I've spent 70 hours a week for 7 months a year over the last 42 years. I'm not quite sure what I'm going to do when I retire to fill that void."

An avid biker and hiker, Koschmann says that his other hobbies will fit in smoothly when he moves to Scottsdale after retirement. "When I retire, which will be at the end of the year, I'm going to spend the winters in Scottsdale and I plan to play a little bit of golf, do a lot of biking and hiking, and take advantage of just being out there in Arizona."

The pair will be honored during a ceremony prior to the start of the Senior Masters Championship on July 18. This will mark the 12th consecutive year Onwentsia Club has generously hosted this special day.

The Illinois PGA thanks TaylorMade and Adidas for their continued support of the Senior Masters.