RevelationGolf Helps Veterans And Others Cope With Disabilities Through Golf 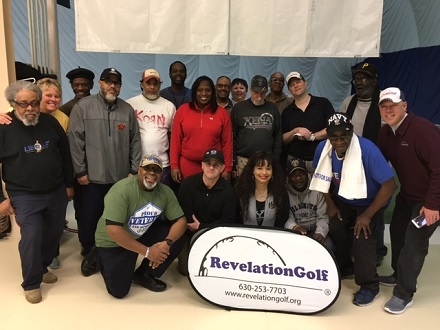 RevelationGolf has done lots of good things since Elk Grove resident Donna Strum created the program in 2005. Strum, a therapeutic recreation specialist, left a job at a hospital to work with children and adults with physical disabilities, breast cancer survivors and at-risk youth through the game of golf.

It wasn’t until two years later when Strum, Executive Director of RevelationGolf, and her business partner, Associate Director, Kathy Williams, an LPGA Class A teaching professional, former Evans Scholar and former head women’s golf coach at University of Minnesota, took the program to military veterans that the concept really took off. By 2008, RevelationGolf was offering weekly golf clinics for veterans held at various locations.

“Now the military veterans program is 90 percent of what we do,” said Strum. “The need is so great. Our programs are used as part of healing and recovery.”

Golf, obviously, has proven to be a tool to cope with both physical disabilities as well as those suffering from such things as post-traumatic stress disorder. The RevelationGolf program works, and its slogan, “a new beginning to a great game,” is most appropriate.

And, it’s not just men who need help. Women and the children of the veterans have benefitted as well and Illinois PGA members have been involved from the outset. Strum, working with medical personnel and PGA professionals trained in teaching adaptive golf, administers her program for both the Illinois PGA Foundation and PGA HOPE (Helping Our Patriots Everywhere), the flagship military program of PGA REACH, which is the charitable arm of the PGA of America. The Illinois PGA Foundation has provided funding for RevelationGolf programs for a number of years.

Veteran participants come from all over the Chicagoland area and Indiana too. RevelationGolf has structured program partnerships with the James A. Lovell Center for Federal Health Care in North Chicago, the Jesse Brown VA Medical Center in Chicago, the Edward Hines, Jr. VA Hospital in Maywood and the Great Lakes Naval Base.

Strum and her medical staffers put interested Illinois PGA members through a four-hour training session before they are allowed to work with the veterans. The first two hours are classroom work in which the different physical disabilities and the medical effects of various participant situations are discussed. Then the professionals get an hour of simulations, hitting shots from various stations under conditions that their students are facing, before getting introduced to the veterans themselves.

Some of the participants have the use of only one hand. Some have tremors. Some are visually impaired.  Some are using prosthetic legs. The golf professionals are given a taste of what it’s like to be in that state.

Don Habjan, the head professional at Makray Memorial in Barrington, took his training with RevelationGolf in the fall of 2005 and has been working as a teacher since that time. Patrick Lynch, the head professional at Cantigny in Wheaton and the 2017 IPGA Player Development Award winner, and Cog Hill’s Carol Rhoades, the IPGA Professional of the Year in 2017, have also been long-time instructors in the veterans’ program.

“The biggest difference between our program and others is that we use a medical model for everything that we do,” said Strum, “the veterans’ physicians make referrals to our program and provide us with notes about each individual and their specific needs. And there are usually at least two teachers at every event along with one or two therapists who assist with the various participant needs.”

Strum has nurses, physical therapists and therapeutic recreational specialists like herself involved in every program to meet those specific needs. In fact, Strum also serves as a therapist in the program.

Clinics and related events were held at 16 locations across the Chicago area in 2017, and not just at golf facilities. RevelationGolf has put on its events at dozens of hospitals and worked with a wide variety of charitable organizations.

One of the key locations is the Captain James A. Lovell Federal Health Care Center at Great Lakes Naval Base in North Chicago. The PTSD veterans there were treated to sessions on a weekly basis in 2017, up from bi-weekly sessions before that. The additional sessions were due directly to the increased funding from the Illinois PGA Foundation.

Susanne Brown, a recreational therapist at that facility, could attest to the value of RevelationGolf.

“So many of our PTSD veterans suffer from persistent thoughts and memories that plague them throughout their day” she said. “Through participation in RevelationGolf, they have shared their ability to release those thoughts, even if only for the time they are golfing.  Participating in golf, they turned their focus instead on the game and their skill. That gave them momentary release and freedom. It is exhilarating to watch them as the stress and tension fade from their bodies and their faces.”

Women going through crises at the Jesse Brown VA Medical Center in Chicago were treated to the RevelationGolf programs for the first time this year – 15 participated – and the three Veterans Golf Days – held at Cog Hill, the nearby Chicago District Golf Association’s Sunshine Course in Lemont and Willow Glen in North Chicago drew a record 80 veterans. Those special days were expanded to include a dinner as well.

The RevelationGolf program doesn’t run in just the warm weather months, either. Links & Tees, in Addison, hosts clinics on Tuesdays and the Buffalo Grove Dome does the same on Wednesdays during the winter months.

A date has also been set for RevelationGolf’s 13th annual fundraiser. It’ll be held on June 11 at Rolling Green Country Club in Arlington Heights.