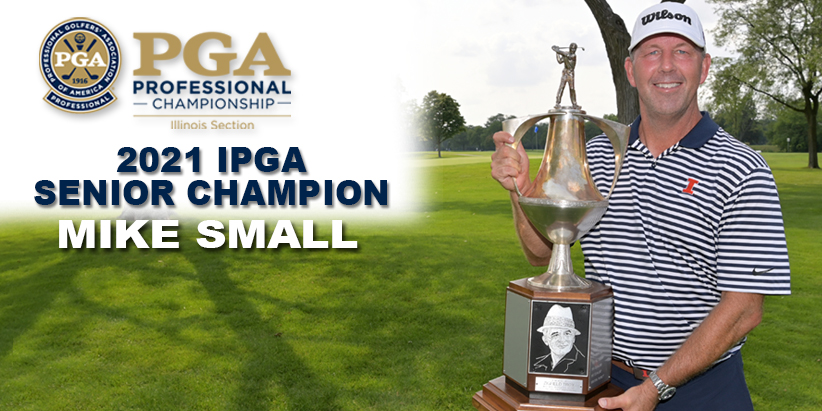 “I’m proud of myself today,” said Small. “You also enjoy playing with your friends and we were battling today. I had kind of a bad stretch going on the back nine and I four-putted, but I got past it and was able to pull it out.”

Small turned in a winning total of 12-under-par 132 to capture his fifth straight Illinois Senior PGA Professional Championship.
Small finished round one in a three-way tie with Varner and Roy Biancalana (Blackberry Oaks Golf Club). He started his five-peat bid with a bogey-free front nine in round one and added birdies on the fifth hole and ninth. He also eagled the par-4 seventh hole to turn at 4-under-par. He carded another birdie on the 11th hole and eagled the par-5 15th to jump into the lead, but he bogeyed the 16th hole to finish in the three-way tie at 6-under-par 66.

Varner also entered the final round in the three-way tie for first place. Varner kept the card clean on day one with a bogey-free round that included four birdies and an eagle. He found himself in a familiar place heading into the final round considering he also led by one stroke entering the final round at the 2020 Illinois Senior PGA Professional Championship.

The second round featured a back-and-forth showdown between Small and Varner. Varner took an early lead birdieing three of his first four holes and getting out to a two-stroke lead. Small birdied the sixth hole to draw within one stroke, then Varner and Small both made birdie on the seventh hole and Small remained one back. Small drew even with a birdie the par-5 ninth hole and the Championship came down to Varner and Small with nine holes to play.

After matching pars on the par-3 10th hole, Small drove the green on the short par-4 11th. Varner was just short of the green and chipped up close to make birdie. Small made his two-putt birdie and both moved to 11-under-par for the tournament. Matching pars on the 12th brought us to the par-5 13th hole. Small hit the green in two, leaving himself an eagle putt. Varner laid up and made about a six-footer for birdie to get to 12-under-par. Small four-putted for bogey to drop to 10-under-par for the Championship.

Small responded well after his four-putt, making birdie on the 15th hole to get back within one stroke. Varner went on to par the remaining five holes, nearly missing birdie attempts on 15 and 16. A great up-and-down from Varner on the 17th hole kept him in the lead by one heading to the par-5 18th.

After hitting a tree with his tee shot on 18, Small hit his second shot into a greenside bunker. Varner, who hit the fairway with his tee shot, missed the green to the left with his second shot. He chipped on and two-putted for par, leaving the door open for Small. Small got up and down from the bunker to make birdie and force a playoff.

The playoff for the Illinois Senior PGA Professional Championship is a three-hole aggerate format. After matching pars on the first two playoff holes, Small was just off the green in two on the third hole and Varner hit the green in regulation. Varner three-putted for his first bogey of the week and Small got up and down for par to secure his victory.

“John (Varner) played well today,” said Small. “It was a shame to see it end the way it did because I think that was his first bogey of the week. He played great all week and really put the pressure on. He’s a pro’s pro and I have nothing but respect for him.”

Biancalana, who also entered the final round in a three-way tie, finished in solo third place. His first-round consisted of a bogey-free front nine and three birdies. A bogey on the 10th hole marked Biancalana’s only bogey of the day. He responded with a birdie on the 11th hole and made three more on his way in including back-to-back birdies on holes 15 and 16.

Biancalana carded another bogey-free front nine in round two but found himself trailing Varner by three strokes. After a bogey on the 10th hole, Biancalana made a push to get himself back to the top of the leaderboard. He birdied the par-5 13th hole, then made back-to-back birdies on holes 16 and 17. He had an eagle look on the 18th hole to get into the playoff but missed it long and ended up making par to finish at 10-under-par 134.