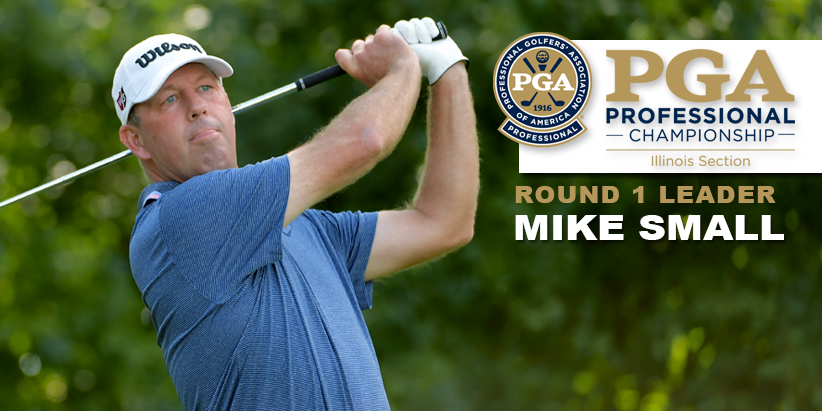 ROUND 1 RESULTS
FINAL ROUND PAIRINGS

HINSDALE, Ill. – August 27, 2019 Following the cancellation of Monday’s play, round one of the Illinois PGA Professional was played today at Ruth Lake Country Club. The top of the leaderboard has a familiar face as 12-time Section Champion, Mike Small (University of Illinois Golf Course), leads by five strokes after setting the competitive course record. Small will look to win his 13th Illinois PGA Professional Championship tomorrow afternoon.

“I’ve had a lot of success in this tournament,” said Small. “I’ve played well in this in the past, but I’m just focusing on playing good golf. I haven’t played a lot this year, so I’m happy to be playing good golf.”

Small got off to a fast start in round one, birdieing the first three holes. Following a par on the fourth hole, Small eagled the par-5 fifth hole and turned with a bogey-free front nine at 5-under-par 31. The bogey-free round continued for Small on the back nine as he carded three more birdies, including two-in-a-row on Nos. 17 and 18 to close out his round. Small’s 8-under-par 63 was just one stroke off the course record, held by fellow Illinois PGA Member, Travis Johns (Medinah Country Club), and set the competitive course record at Ruth Lake Country Club.

“I got off to a hot start today,” said the University of Illinois Men’s Golf Coach. “Holes one and two were birdie holes, then I picked up a birdie on three, that’s a tough hole. Then I was hitting iron into the fifth green and made eagle there. I tried not to think about where I was too much and just tried to play good golf.”

Andy Mickelson (Mistwood Golf Club) sits five strokes behind Small after a 3-under-par 68 in the first round. Mickelson carded a bogey-free front nine with two birdies to make the turn at 2-under-par (35). Following a bogey at the par-4 11th hole, Mickelson finished his first career round at the Illinois PGA Professional Championship with birdies on Nos. 13 and 16.

“It was awesome to be able to play in this finally,” said Mickelson.” I was really nervous getting started and took some bad swings early on, but I thought I played well and I’m happy to be where I am.”

Brian Carroll (The Hawk Country Club) and Chris French (Aldeen Golf Club) are T3 entering the final round of the 2019 Illinois PGA Professional Championship. Both Carroll and French carded four birdies on their way to 2-under-par 68.
Garrett Chaussard (Skokie Country Club) and Johns round out the top-five following 1-under-par 70s in the first round. Chaussard recorded a bogey-free front with two birdies, one on each nine, while Johns registered four birdies, two on each nine.