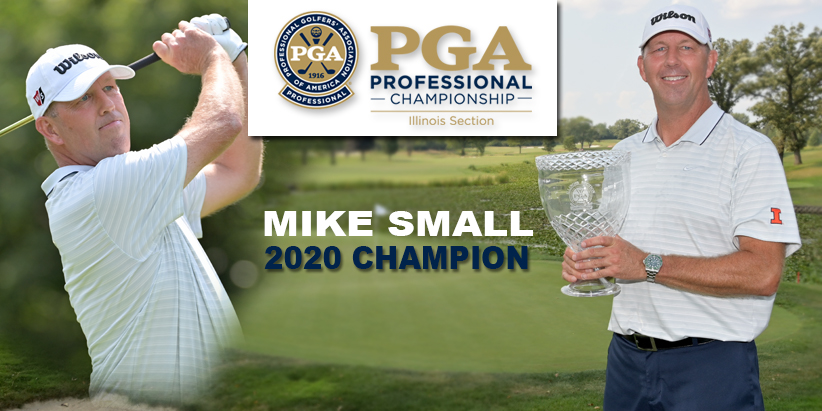 “I think that’s always a nice thing to win at great facilities like Medinah,” said Small. “I think it’s great that cubs like Medinah and Olympia Fields host events like this. The club professionals are out there promoting the sport and growing the game, so I think it’s nice to reward the PGA Professionals with nice venues to play at. I think that’s commendable and very nice for those clubs to do that.”

Small, who tied the Medinah Course #1 record in Round two, held a one-stroke lead entering today’s final round. He spent the day trying to hold off the Mistwood Golf Club attack of Andy Mickelson and Frank Hohenadel who entered the day trailing Small by one stroke.

A bogey-free back nine secured Small’s 13th Section Championship victory. He started the back nine with a birdie on the par-4 10th hole, increasing his lead to two strokes. He birded the par-4 13th hole for the second straight day and found himself with a three-stroke lead with five holes remaining. Although his lead was not as large as last year’s Section Championship, Small remained focused at the task at hand and closed out his round with five straight pars to shoot 3-under-par 68 in the final round and 13-under-par 200 to win the Championship by four strokes.

“Winning this tournament doesn’t get old and it doesn’t get easier,” said Small. “It’s been awhile since I won so it feels good to contend. I always want to be in contention, so it felt good this week. The course was hard today. I hung in there. I didn’t play great but scored well. I didn’t hit it well, but I competed and putted really well today.”

Mickelson, who entered Wednesday afternoon searching for his first Illinois PGA Major victory, closed Small’s gap early on the front nine. After a par on the first hole, Mickelson made birdies on the par-4 third hole and the par-3 seventh hole and was tied with Small at 11-under-par for the tournament. However, Mickelson would go onto make bogey on the par-5 ninth hole to drop back to 10-under-par for the tournament and make three straight bogeys on holes 13, 14 and 15. He closed out his round strong with back-to-back birdies on 17 and 18 to card an even-par 71 for the day and 9-under-par 204 for the tournament.

“To those guys the respect is mutual,” said Small. “I have a lot of respect for both Andy and Frank. They’re both very good players. I enjoy playing with them.”

If eligibility is met and maintained, the low 20 scorers in 2021 will earn berths into the 103rd PGA Championship, May 20-23, 2021, at The Ocean Course in Kiawah Island, South Carolina.

The PGA Professional Championship is presented by Club Car and OMEGA. Supporting sponsors are Titleist/FootJoy, NIKE and TaylorMade.  Presenting partners are Golf Channel and the PGA TOUR. The 41 Section Championships and the National Championship offer a combined purse of more than $1.5 million.