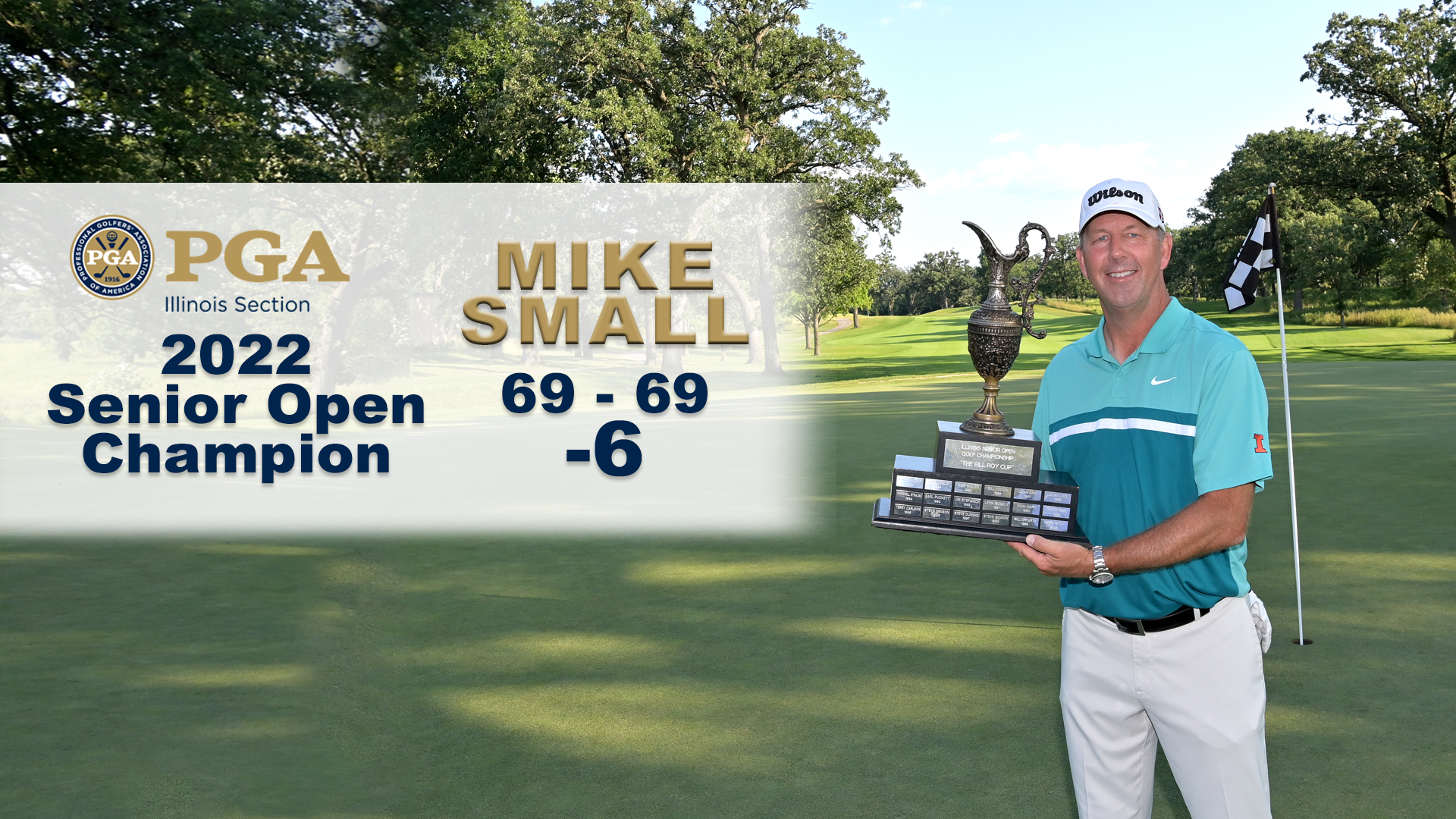 ADDISON, Ill. – June 28, 2022 – Mike Small (Champaign, Ill.) won the 2022 XXIO Illinois Senior Open Championship on Tuesday, June 28 at the Preserve at Oak Meadows. Small came back from a two-stroke deficit after round one to hold off Danny Mulhearn (Wheaton, Ill.) and Mike Henry (a) (Bloomington, Ill.) en route to his first career Illinois Senior Open Championship. Small carded rounds of 69, 69 for a tournament total of 6-under-par 138.

“I thought it was a well-played round for the three of us today for about 14 holes,” said Small. “We all played solid. Starting on 15 I started making a variety of errors. I made some on 15, and then Danny made some, and Mike made some at the end, but we all mixed in some good shots in there too. All in all, it was a great round, I didn’t have my best stuff there at the end, but I was able to hang on.”

Small trailed by two strokes entering the final round after an opening round of 3-under-par 69. Small started the day chasing Mulhearn who posted a score of 5-under-par 67 in round one.

The two-stroke deficit quickly grew on Small who made bogey on the par-5 second hole. Mulhearn meanwhile made his first birdie of the day on the second hole to extend his lead to three strokes. Small would answer back with a birdie of his own on the short par-4 fourth hole to get back to two back. Small then nearly holed out for albatross on the par-5 fifth hole. He tapped in for eagle to get to 5-under-par for the tournament. However, Mulhearn made birdie on the fifth hole to get to 6-under-par and held a one-stroke lead.

Mulhearn extended his lead with a birdie on the par-3 sixth hole. Through six holes, Mulhearn led Small by three strokes and Henry by two strokes. Small and Henry made par on the remaining three holes on the front nine, while Mulhearn bogeyed seven and nine falling back into a three-way tie with Small and Henry.

The three leaders remained tied through the 12th hole as all three players made par. All three players then hit the fairway on the par 5 13th hole. Henry laid up with his second shot. Mulhearn and then went for the green in two but his ball bounced short of the green and kicked right into the penalty area. Small also went for the green in two and left himself about 25 feet for eagle. Small lagged his putt close and made birdie. Henry and Mulhearn both made par and Small took his first lead of the tournament.

All three players made par on the 14th hole and Small held onto his one-stroke lead. On the par 5 15th hole, Small hit his drive to the front of the water leaving him with a 9 iron into the green. He left his second shot short then chunked two chips and ended up making bogey.

Mulhearn found himself in the left trees on 15. He hooked the ball out of the trees just short of the green. A tough lie made him go long of the flag stick with his third shot. He then lagged his putt close to make par and tie the lead.

Henry hit the fairway with his drive. He then hit hybrid short of the green. Looking to get up and down for birdie he left himself about 15 feet for birdie. He couldn’t convert his birdie opportunity, but par was good enough to get into a three-way tie.

Following the bogey on 15, Small stepped up and drove the green on the par 4 16th hole, which was moved up in the final round to 290 yards. He then made the eagle putt from the back of the green about 65 feet down the hill to move back into the lead.

“I bogeyed 15 with a 9 iron in my hand, which is regretful,” said Small. “I had to go for the green because the other guys were going for it as well. There was a little bit of a crosswind so I hit a little fade driver to the back of the green and made the putt. I really needed it at that time. That was the highlight of the day.”

Henry also went for the green on 16. He missed the green to the left but was able to get up and down to make birdie. He went to the 17th hole trailing Small by one stroke.

Mulhearn hit his drive just short of the green, but he chunked his chip on his second shot. He chipped his third shot close and made par.

The up and downs continued for Small who missed the green short and to the right on the par-3 17th hole. Despite a good chip, Small could not convert his par putt and dropped back to 6-under-par.

Henry hit the green on the par 3 and two-putted for par to tie Small for the lead heading into the 72nd hole of the tournament.

Small, Henry, and Mulhearn all hit the fairway with their drives on the 18th hole. Mulhearn was away and hit his approach shot to the back of the green. Henry played second and left his shot in the greenside bunker. Small then stepped up and missed the green to the left, leaving himself short-sided.

After leaving a shot in the bunker, Henry three-putted for double bogey to finish third. Small hit his delicate chip to about two feet and left himself a tap in par. Mulhearn stepped up with a chance to force a playoff with Small, but left his birdie bid short and finished in solo second place. Small cleaned up his par and secured his first career XXIO Illinois Senior Open Championship.

“That last chip was not an easy shot,” said Small. “The way I bogeyed 17, I knew I couldn’t give another one away. That was about all I could do from there. I was in the rough with little green to work with and I flopped up there to about a foot away. That was a great way to end, and I just have to remember those types of shots and take those with me.”