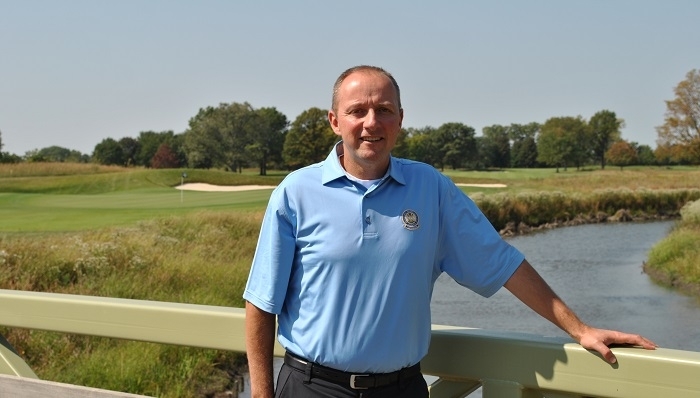 Ed Stevenson’s name doesn’t appear on the leaderboard in any Illinois PGA tournaments.  Only very rarely has he even played in them.  Still, Stevenson is considered by all as the consummate PGA professional.

That means Stevenson oversees not only the District’s three golf facilities but also its myriad of other properties. The District owns 13 percent of the land in DuPage County and manages 26,000 acres. In addition to the golf courses that includes 62 forest preserves, 145 miles of trails and five education centers.

Stevenson, 45, has worked full-time for the District since 2004 and has been its director of golf course operations since 2011.  Last November, while playing a lead role in The Preserve renovation, he also took on the added duties of interim executive director and now the interim tag has been removed.  Board president Joe Cantore explained why.

“Ed is a tenured member of our leadership team, and in his time overseeing our business enterprises he has demonstrated a keen ability to think creatively, manage big projects, reduce expenses and grow relationships.  He has proven he has the necessary skills to lead this organization.”

In other words, Stevenson proved he can do it all, and his versatility was greatly enhanced through his variety of roles as a golf professional.

In addition to the things he did while managing golf courses Stevenson also has been co-host of a popular radio program, Golfers on Golf, that has run weekly for 10 years throughout the golf season and he also has been director of instruction for Marianjoy Hospital’s programs for adults and children with disabilities.

Those factors undoubtedly led to Stevenson’s elevation beyond the golf world.

“All the roles of a PGA professional means he has to wear a lot of hats,” said Stevenson.  “That’s the right background to prepare someone for a job like this. It’s been an interesting path to get there.”

It all started while he was growing up in Deerfield.

“Ultimately I grew up in a family with some avid golfers,” said Stevenson. “My Dad grew up in Scotland, so my loving golf was almost mandatory.  Plus, I was fortunate to grow up in a community where I had the opportunity to caddie.”

“I enjoyed the culture of the game, and – even as a caddie – I enjoyed helping others enjoy the game,” said Stevenson.

While he played on some competitive teams at Deerfield High School and participated in Illinois Junior Golf Association events, Stevenson didn’t play golf while earning a degree in journalism at the University of Iowa.

During his summers away from school he worked as a caddie master at Briarwood. Anticipating a future of writing press releases after graduation in 1994, Stevenson looked for other career options and Cochran suggested he take the PGA of America’s Playing Ability Test. That kept him in golf a little longer — and it turned out to be a lot longer.

Stevenson served his PGA apprenticeship at Briarwood and moved over to Oak Meadows as an assistant professional in 1996.

“The members at Briarwood treated me wonderfully,’ he said, “but I realized it was time to learn something new, and I switched to the public end of the industry.  Oak Meadows was a beautiful opportunity, and I could progress through a lot of different roles.”

By 2001 he had attained full PGA membership and was named Oak Meadows’ head professional.  When he moved up to the District’s director of golf he became the overseer of three courses instead of one.  Nearby Maple Meadows, which then had 27 holes, and  nine-hole Green Meadows, in Westmont, came under his jurisdiction.

Oak Meadows, though, remained his biggest concern.  The course, built in 1923, had a long history of flooding problems that dated back to the time it was called Elmhurst Country Club. The course, designed by Charles Wagstaff, was deemed good enough to host the 1941 Chicago Open, won by no less a legend than Ben Hogan, but flooding was always a problem and the situation was made worse in 2009 when the facility lost its clubhouse in a fire caused by lightning.

For several years District personnel contemplated what to do with Oak Meadows.  Eventually a $16 million golf course renovation was deemed the answer, and Batavia architect Greg Martin took on the project while also serving as president of the American Society of Golf Course Architects.

Stevenson worked closely with Martin during the two-year construction process.

“We looked at renderings, drawings and planning, so it was more like a five-year project,” said Stevenson. It was something much bigger than a golf course revival. Only one-third of the hefty price tag went toward the course.

The area can now hold 20 million more gallons of storm water than it could before construction began.  The construction process involved the moving of 700,000 cubic yards of earth, the removal of 1,000 non-native trees and the planting of 500 more suitable ones along with 308,000 baby wetlands plants.  Thirty new areas of wetlands were added to the 10 that had already been there.

The renovated course was well received during its soft opening this summer. A grand opening is planned for the spring, then the clubhouse will become a high priority. An architect has already been named and a design approved by the District board.  Ground-breaking is targeted for early in 2019 and the opening in 2020.

Until then, at least, Stevenson will remain a golf guy while enjoying family life with Kathy, his wife of 17 years, and their two daughters.

“Golf being my background and passion, I wanted to stay involved,” said Stevenson, “but we’ve got a lot of other projects going on throughout the Forest Preserve.  We have an equestrian center renovation under way and I’m working on a master plan that will set priorities for the next five years.”

Yes, Stevenson is one golf professional who has transformed himself into much more than a golf guy.