Three Tied for the Lead at 73rd Illinois Open Championship 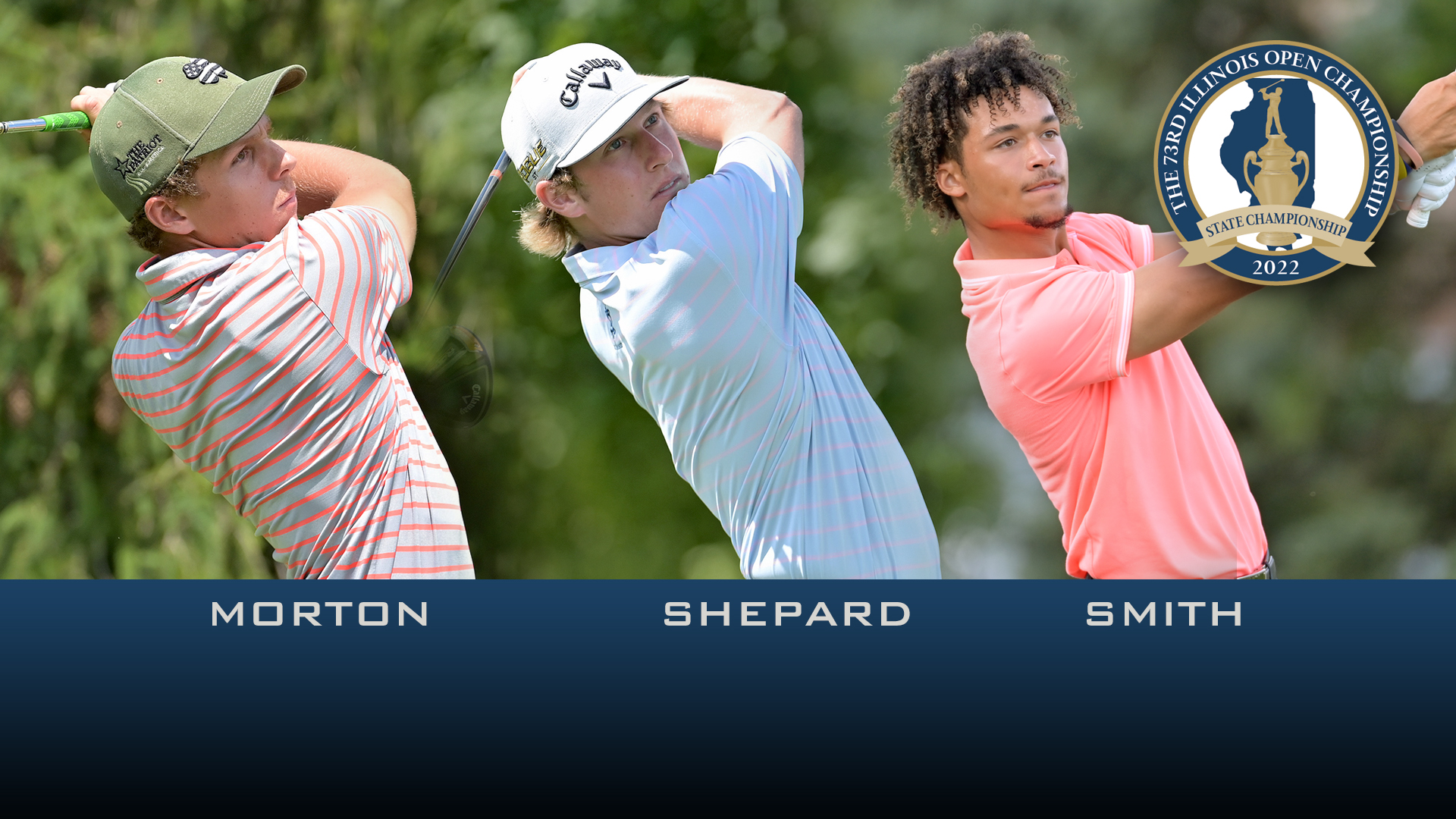 NAPERVILLE, Ill. – August 1, 2022 – The 73rd Illinois Open Championship began in a familiar fashion, with many players popping up on the leaderboard at White Eagle Golf Club. Despite many players making early runs throughout round one, only Jimmy Morton (Sugar Grove, Ill), Drew Shepherd (Chicago, Ill.), and Marcus Smith (a) (Rockford, Ill.) were the ones able to hang on to the lead.

Morton and Shepherd made their runs on the front. Morton, who started on the back nine, carded an even-par 36 on the backside. He then turned to the front and made birdies on one, two, and four to get to 3-under-par. He had sole possession of the lead until an errant tee shot on seven forced him to punch out from under the trees. Morton made bogey to fall to 2-under-par for the day and would finish his round with back-to-back pars for his first round 70.

“I tried to be conservative off the tee today. I hit a lot of two irons to just get the ball in play,” said Morton. “I tried to play my approach shots conservatively as well and take advantage of some of the shorter holes. You must stick to your game out here and keep your routine. You have to be accurate and hit your targets. It’s a demanding course off the tee, especially in the wind.”

Shepherd also played well on the front nine and found himself with a two-stroke lead after nine holes. He made five birdies on the front nine with one bogey to card a 4-under-par 32. Despite playing well on the back nine, Shepherd was unable to take advantage of his chances and he made three bogeys before getting back into the lead with a birdie on the par-5 17th. A par on White Eagle’s famous 18th hole island green left Shepherd with a 2-under-par 70 for round 1.

“I played the front well. I was hitting it close and making putts,” said Shepherd. “I hit it great on the back as well – I just didn’t make as many putts. On the front, I was driving it well and hitting my approach shots close. I gave myself a lot of good looks and got the putts to fall. I think I am playing well enough to win the event. If I keep doing what I’ve been doing and keep giving myself chances, hopefully, I can take advantage of some of them and come out on top.”

Making his first career Illinois Open appearance, Smith attacked the course in the more traditional way, getting through the tough front nine and attacking the more scorable back half. He made the turn at even par and then birdied holes 12 and 13 to tie Morton and Shepherd at 2-under-par. After missing the green to the left with his second shot on the par-5 17th hole, Smith hit a great pitch shot from the greenside rough that caught the slope in the center of the green and took his ball all the way down to the back right hole location. Smith tapped in for a birdie and took sole possession of the lead at 3-under-par. Smith gave up his lead one hole later with a three-putt bogey to close out his round and his finish the day at 2-under-par 70. In round one, he was one of only two people in the afternoon wave to break par.

“I just tried to stay positive out there today,” said Smith. “It can be frustrating seeing the wind take some of your shots offline. I think it’s crucial to get off to a good start here. If you can do that then you can start to attack a little. Tomorrow, I just need to continue to be positive and pick my spots. You can’t always attack the pins out there.”

Four players are tied for fourth place after 1-under-par 71s in round one. Ethan Farnam (Crystal Lake, Ill.) was tied for the lead a couple of times during his opening round. Starting on the back nine, Farnam bogeyed the par-3 12th before making back-to-back birdies on holes 14 and 15. He then added his third birdie in four holes with a birdie on the par-5 17th hole and joined Morton and Shepherd at 2-under-par. Back-to-back bogeys on holes 18 and one brought Farnam back to even par for the tournament. He got back into a share of the lead at 2-under-par with birdies on three and six. His tee shot on the par-3 eighth hole missed the green to the left and he failed to get up and down. A par on the ninth hole put Farnam in the four-way tie for fourth.

“It took a lot from me today to post the score I did,” said Farnam. “I had five birdies, four bogeys and a lot of par saves from outside five feet. It was not easy out there. If you are on the wrong side of the hole or the wrong part of the green complex you were likely looking at 15 feet or more for par. Fortunately for me, I was able to make a few of those comebackers to keep the round going.”

David Perkins (East Peoria, Ill.) is also tied for fourth place. Starting on the back nine, Perkins made five straight pars to begin his round. He bogeyed holes 15 and 18 with a birdie sandwiched in between those holes on the par-5 17th hole. Perkins made the turn at 1-over-par 37. The birdies started to fall on Perkins’ back nine. He birdied holes two and three to get to 1-under-par. Looking to join the leaders at 2-under-par, Perkins mishit his approach on the fourth hole, forcing him to make bogey and fall back to even par. After a birdie on the sixth hole, Perkins fell back to even par again with a bogey on eight but was able to salvage the round with a nice birdie on the par-4 ninth hole to get it back to 1-under-par for the day.

“Today was a grind,” said Perkins. “The conditions were tough today. The pins were in some challenging spots, the fairways were rolling out, and the wind was up. It was a fair test, you just had to keep your ball in play and try and make as many pars as you could. When it’s hard like this it can wear mentally on the field. You just have to make pars and stay in it.”

Two-time Illinois Open champion (1987, 2001) Roy Biancalana (St. Charles, Ill.) came roaring up the leaderboard on his back nine after turning at 2-over-par 38. A bogey on the third hole offset the birdie he made on the first hole, but he closed out his round birdieing three of the last six holes to finish 1-under-par and get into the tie for fourth place. Biancalana was the only other play beside Smith to break par in the afternoon wave.

Possibly the story of the day was Scott Ten Broeck’s 1-under-par 71. The amateur from Evergreen Park, Ill. was an alternate for the Championship and got the call late Sunday night that a spot had opened up in the field. Ten Broeck took full advantage of this opportunity getting himself into contention after the first round.

Some of the early front runners included 2021 runner-up, Luke Gannon (Mahomet, Ill.) who got off to a hot start birdieing three of the first six holes. A bogey on 16 ended Gannon’s run and started a string of four bogeys on the back nine. He finished the day at 2-over-par 74 and is T29.

Illinois PGA Professionals Frank Hohenadel (Minooka, Ill.) and Curtis Malm (Aurora, Ill.) also found themselves atop the leaderboard at one point this morning. Hohenadel got to 1-under-par with a birdie on the par-5 17th hole and was just one shot off the lead for the moment. An up-and-down back nine found Hohenadel in a pack of players tied for first place. He made his last birdie of the day on the fourth hole to get back into a tie for the lead but would go on to make three bogeys on his last five holes to finish at 1-over-par 73. He is currently T15.

Malm, PGA General Manager at White Eagle Golf Club and the 2000 Illinois Open champion, made birdies at 11 and 14 to get into the early lead at 2-under-par. A bogey on 16 dropped him back, but he responded with a birdie on the par-5 17th hole and made the turn tied for first place. The front nine (his back nine) got the best of Malm who bogeyed three of his first four holes on that side to fall out of the lead and finish T15 with a 1-over-par 73.

Reece Bartelt (Warrenville, Ill.) made a hole in one on the par-3 fifth hole. The fifth hole was playing 146 yards in round one. Bartelt hit his 9-iron to record the ace.

The 73rd Illinois Open will continue tomorrow with tee times starting at 7:30 a.m. off of the first and 10th tees. Following the conclusion of round two, the field will be cut to the low 50 and ties.